The rise and fall of the Buckhead cityhood movement: A timeline

Home / Buckhead Stories / The rise and fall of the Buckhead cityhood movement: A timeline 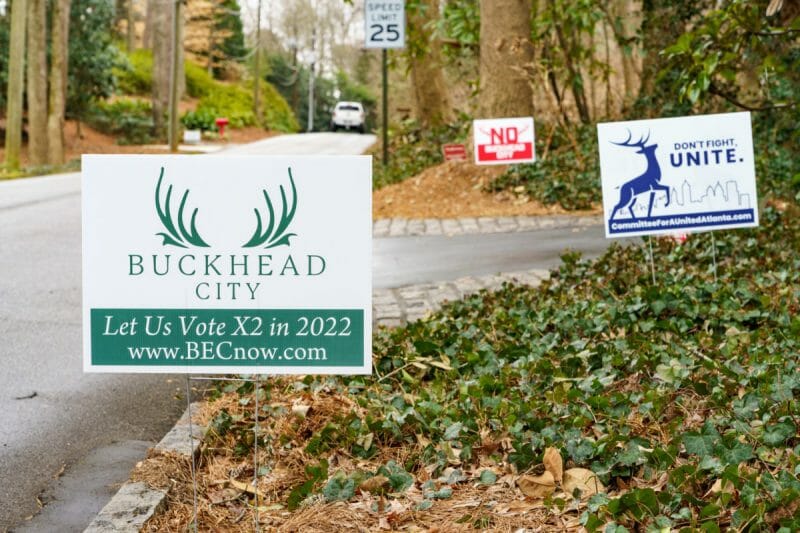 After racing at breakneck speed for roughly 18 months, the Buckhead cityhood movement has crashed and burned in the Georgia General Assembly — at least for 2022.

Lt. Gov. Geoff Duncan and House Speaker David Ralston (R-Blue Ridge) announced this week that they would not allow cityhood legislation to proceed this session, meaning it cannot get on the November ballot as supporters wished. Ralston left open the window for a return of the legislation if Atlanta’s crime issues do not abate. But the rejection by Republican leaders of legislation backed exclusively by Republican lawmakers was a telling blow to the divisive political issue.

How did we get here? It’s a snowball effect of an old secession idea that gained enormous momentum from 2020’s historic cultural shakeup and crime spike. Along the way it picked up some grassroots populism, some still-murky Georgia GOP machinations, and political pratfalls by a bungling mayor. The result is a truly historic moment, decisive and divisive, in Atlanta’s history.

Cityhood is an idea nearly as old as Buckhead’s annexation into Atlanta in 1952. The last semi-serious discussions were back in 2008 by an association of disgruntled taxpayers. The notion began bubbling again around 2016 during the corruption-laden administration of Mayor Kasim Reed. It continued in 2017 and 2018 as Keisha Lance Bottoms won the Mayor’s Office in a razor-thin victory over Buckhead’s Mary Norwood, and a Buckhead-esque community called Eagle’s Landing attempted a secession from the Henry County city of Stockbridge, a move that died in a referendum.

The division in the air was serious enough that Bottoms made the unity slogan “One Atlanta” a theme of her administration, but at the same time, the political spark never jumped beyond grumbling on Nextdoor. That is, until 2020 hit us all with a one-two punch of history: the COVID-19 pandemic and its crazy-making effect on crime, and the Black Lives Matter protest movement following George Floyd’s murder by Minneapolis police.

In May 2020, Buckhead was shaken by widespread looting and rioting in commercial areas following peaceful protests Downtown about Floyd’s death. Just a couple of weeks later, Bottoms’ response to the Atlanta Police killing of Rayshard Brooks in Peoplestown, including the immediate firing of officers and allowing armed protesters to occupy the site, drew widespread controversy. In a Buckhead already broadly fed up with the administration’s failures on basic city services like trash pickup and pothole-filling, the seeds of cityhood sentiment germinated.

Exactly who organized the actual cityhood movement remains mysterious, and the politics quickly became partisan, including the strange situation of Republican legislators from outside Atlanta supporting it while the entire, all-Democrat Buckhead delegations oppose it. Sam Lenaeus, a local real estate broker familiar from serving on the Buckhead Council of Neighborhoods, was an early leader. But he was quickly displaced by the little-known Bill White, a brash, politically connected fundraiser with a penchant for incendiary and offensive comments. The movement appears set to live or die by his brazen personality and tactics.

The following is a timeline of key moments in the cityhood movement — and where it may go next.

Rumors of semi-organized talk flew until finally came the emergence of the Buckhead Exploratory Committee — now known as the Buckhead City Committee — in semi-public virtual meetings. Members, who would not identify themselves, talked about a variety of options: cityhood, annexation into another city, or just sending a complaint to the mayor. They also discussed the racial implications of a majority-white neighborhood leaving Atlanta, which became a major issue of the debate, and said racists would not be welcome in the movement. Opposition quickly emerged from Bottoms, former Mayor Sam Massell, and four major local organizations: the Buckhead Community Improvement District, the Buckhead Coalition, the Buckhead Business Association and Livable Buckhead.

The BCC went public in a January meeting that made cityhood the focus and sought money for polling. By February it finally identified its leaders and hired lobbyists to work the legislature.

The first cityhood forum was held at a virtual meeting of the Buckhead Council of Neighborhoods, with White on the supporter side and Linda Klein, a Buckhead Coalition member, on the opposition side. A week later, the opposition group Committee for a United Atlanta emerged with Klein as its co-chair alongside Edward Lindsey, a former state rep. for Buckhead.

A BCC poll found majority support for holding a vote on the cityhood question, though it did not ask about a position on cityhood itself. The poll also revealed a deep partisan divide on the question, with local Republicans overwhelming in support and a plurality of Democrats opposed. Subsequent polls by the BCC and CUA found a continuing partisan divide, and by January 2022, the CUA reported opposition was rising and was maybe the majority position.

The BCC released a feasbility study showing Buckhead City would work in sheer revenue-and-expenditure terms. The study was a legally required step for cityhood legislation to continue moving ahead. The CUA quickly followed with a counter-study saying cityhood would blow huge holes in the City of Atlanta and Atlanta Public Schools budgets, opening other unanswered questions about bond debt and whether APS could operate legally in another city.

Atlanta’s state Senate and House delegations — including all Buckhead legislators — announce they will fight cityhood bills. On Halloween, the BCC opens a campaign headquarters on Peachtree Road, which the City later cited for alleged sign violations, triggering a First Amendment lawsuit from the group. In November, Sen. Beach again pre-files a cityhood bill.

Cityhood opposition grows, with North Atlanta Parents for Public Schools saying it will back the Atlanta Board of Education’s fight against the idea, and the formation of a new grassroots group called Neighbors for a United Atlanta.

Andre Dickens is elected as the new mayor in a late-November runoff against Felicia Moore, the more locally favored contender. However, both candidates opposed cityhood and the BCC denounced both. Dickens quickly takes a hands-on approach to countering cityhood, attending local meetings, joining opposition group events, and touting a yet-to-open police mini-precinct in Buckhead.

BCC leader White was already controversial for some insulting and incorrect public commentary, and his past involvement in fundraising scandals. But he triggered widespread public outrage over racial remarks. First he called Dickens a racist, then followed up by retweeting comments from the white nationalist affiliated website VDARE attributing crime to Black populations. White apologized for the latter post, but in February again drew outrage in social media comments that spun a debate about funding for a MARTA project into a conspiracy theory that its CEO’s recent suicide was due to a non-existent theft of money.

While White made incendiary comments, cityhood opponents began a political chess game. The City Council passed bond refinancing that included a “poison pill” putting a new Buckhead City on the hook for a huge payment. Lt. Gov. Duncan assigned the Senate version of cityhood legislation to all-Democrat committee, giving it bleak prospects. And Buckhead’s lawmakers plotted legislation requiring a cityhood referendum to be held citywide, not just in the neighborhood, and require a supermajority to win.

Assuming Duncan and Ralston’s opposition holds true, cityhood will officially die for this session on “Crossover Day,” March 15, when a bill must pass one chamber to stay alive. The cityhood movement itself may just go dormant for a while; the BCC says it is establishing a political action committee to support pro-cityhood candidates, one of whom is already running as a longshot in the local 5th Congressional District. But a major question would be whether White’s controversial and vitriolic leadership could continue and whether other cityhood advocates would be able to shed their association with the darker side of the politics. Likewise, look for legislation that will make it harder for neighborhoods to secede; even Jones, the state rep. who sponsored Buckhead’s legislation, recently spoke favorably of the supermajority vote idea, which he himself originated in another failed cityhood effort.