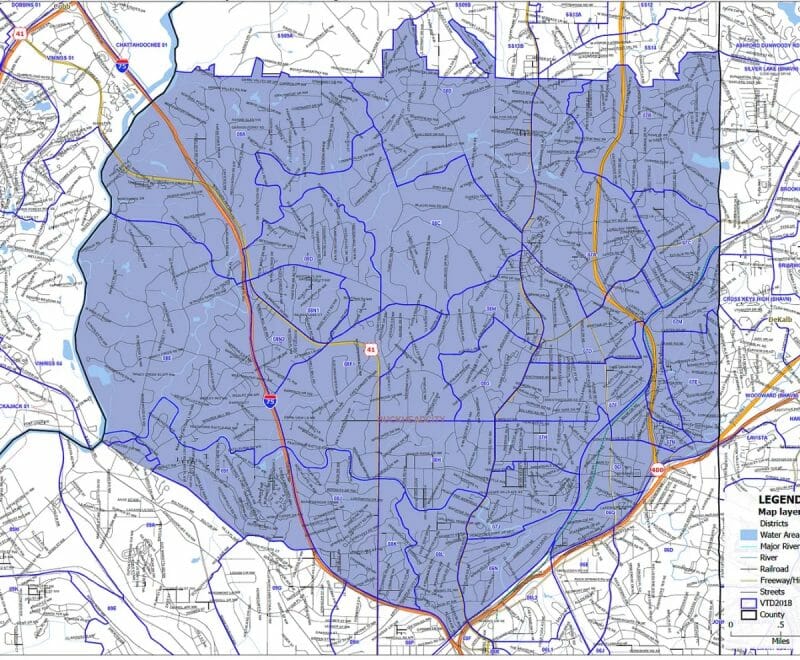 The City of Atlanta has launched a counterstrike against the Buckhead cityhood effort in the form of legislation that could put the new city on the hook for a lump-sum payment of many millions of dollars of bond debt.

The last-minute addition of that “poison pill” to a roughly $192 million bond sale item took even the City Council that approved it Dec. 15 by surprise. The move to force a big payment would take effect only if voters approve Buckhead City and only if a future City Council decided to squeeze the trigger in a separate vote. Administration officials and supporters say the provision is necessary to stave off the chaos that cityhood could cause in bond markets and ratings, while cityhood supporters are calling it a “tactical error” and an anti-democratic act of intimidation.

Doug Selby, a bond lawyer working for the City, told the council the provision was added “in response to growing questions from the investor market with respect to what would be the consequence of a deannexation.”

City Councilmember Howard Shook of Buckhead’s District 7 was the sole vote against the legislation. He blasted it as a “brutal, raw act of political bullying” that betrayed cityhood opponents’ tactics of seeking unity.

Some councilmembers were absent for the 11-1 votes — including Mayor-elect Andre Dickens and J.P. Matzigkeit, who represents Buckhead’s District 8.

Shook claimed both sides of the debate would oppose the use of such tactics done “in the dead of night,” but he appears to be incorrect.

The pro-cityhood Buckhead City Committee is certainly no fan.

“Buckhead City has already agreed to continue to pay off its share of these bonds,” said Bill White, the BCC’s chairman and CEO, in a written statement. “The Atlanta City Council has taken a most ill-advised legal action that is punitive towards its own citizens who wish to exercise their constitutional right to vote in an attempt to intimidate them from doing so. The legislature is now witness to this retributive and tactical error. The council has now created something that will have unintended consequences which will hurt all residents of Atlanta.”

The anti-cityhood Neighbors for a United Atlanta, however, has a different take.

“The City of Atlanta has a duty to act in the best interest of its taxpayers,” said Neighbors Executive Director Michael Handelman in a written statement. “Capital markets have heard loud and clear the Buckhead City Committee’s … confusing and flip-flopping statements in regards to honoring outstanding City of Atlanta municipal debt. The uncertainty of Atlanta’s future tax base creates greater risk for markets — and with greater risk comes higher costs for Atlanta to finance critical infrastructure projects. The ‘poison pill’ is now an unfortunate necessity to convince markets that Atlanta — and Georgia cities at large — will meet their debt service obligations. But the real solution, however, is for the General Assembly to vote down the BCC’s misguided cityhood legislation.”

Edward Lindsey, co-chair of Committee for a United Atlanta, another opposition group, could not immediately be reached for comment.

Municipal bond impacts have been a major issue in the cityhood debate. Bond payments and ratings are important to cities. Lower bond ratings mean projects like streets and fire stations are more expensive to finance, and lower tax revenue could make it harder to pay off existing bond debt.

The loss of the Atlanta’s wealthiest neighborhood could have a big impact on revenue and debt payments. And the situation of such a neighborhood leaving its city is virtually unprecedented, opening a range of unknown effects; the most recent similar proposal was for the city of Eagle’s Landing in Stockbridge in 2018, which spooked bond markets. Some academic experts have said Buckhead cityhood likely would have long-term negative effects on statewide municipal bond ratings. The BCC has said it believes any negative effects can mitigated and more details will come later.

The new bond legislation, consisting of two interrelated papers, has been moving through the City Council committees for months in presentations focused on financing improvements to police and fire stations and in part to refinancing debt at more favorable interest rates. The “poison pill” provision is brand new, added by a substitution this week shortly before a special called council meeting.

The provision creates an “extraordinary optional redemption” where the City can essentially call in bond debt from a deannexed area within 12 months of the deannexation or the creation of a “Special District” encompassing it for the purpose of gathering such revenue, whichever comes later. The option would force payment of the deannexed area’s share of 103% of the principal of bonds, any unamortized premium on them, and any accrued and unpaid interest. The calculation would be based on property valuations. The City Council has the ability to exercise the option if deannexation legislation is approved, but the effects are nullified if voters reject the deannexation in a referendum.

The legislation does not name Buckhead, whose cityhood effort would require both deannexation and incorporation, but that is plainly the target. And given the outsized role of Buckhead in the City’s tax base, such a payment likely would run at least into the eight-figure range. The idea is to calm the nerves of investors who would question the ability of Atlanta to pay its debts.

“We think that, given the landscape that we’re in, any ideas regarding deannexation of any part of the city presents an inherent risk to the City going forward,” said Mohamed Balla, the City’s chief financial officer, to the council at the special called meeting. He emphasized the extraordinary optional redemption provision “is just that, an option… it is not automatically triggered….” He said having such an option for the new council, which comes into office in January, is in the “best interest” of the City.

Councilmember Jennifer Ide, who chairs the Finance/Executive Committee that reviewed the legislation and whose District 6 includes part of Buckhead, was among those saying they never heard of the provision until a SaportaReport news story revealed it the day before the special called meeting and introduced the “poison pill” term.

Meanwhile, Balla said, the City actually began selling bonds on Dec. 14, prior to to the council’s meeting and vote on the legislation. The legal documents for the sales included the deannexation provision, he said, even though the council had yet to approve it. That essentially meant that if the council did not rubber-stamp the language as is, buyers could back out of the bond sales that were already underway.

Ide acknowledged the council was boxed in, saying that with bond sales underway, “it’s too late to unwind this” if they wanted to.

Shook still wanted to. He made motions to kill the poison-pill provisions in both papers, both of which failed for the lack of a motion to second from any other councilmember. Shook, who has spoken skeptically about Buckhead cityhood, blasted the provision in lengthy remarks attacking it as secretive, threatening and politically counterproductive.

“How many of you knew about this poison pill provision until today or yesterday?” asked Shook. “I didn’t until I read about in the media — which you’d think I’d be accustomed to now after four years [of Mayor Keisha Lance Bottoms’ administration], but I’m not.

“The poison pill is aptly named,” Shook continued. “The problem is the poison’s reserved for Northside households only. And I don’t know what I’m going to do if I hear the term ‘option’ one more time. I know the difference between and option and a threat. This is a brutal, raw act of political bullying aimed at one part of the city, which is interesting given all the rhetoric about the need for everybody to work collaboratively.”

Shook went on to say that the bond legislation is needed, “but without these toxic provisions that were put in in the dead of night and uncovered at the last second. I think — I know — that if you are a supporter of either side, these provisions need to be taken out. Both sides would support that.”

Shook said that “rather than the sound of a gun being cocked,” the City should allow the incoming mayor and council “to try to work together to resolve the problems that have bedeviled all Atlantans, regardless of where you live — to have troubled us for the last four years and are in fact the root cause of the problem we’re discussing now, which is only going to get far worse. And talk about cutting off a new mayor at the knees and disregarding voices of seven additional or new councilmembers. I just don’t know why we would do that. So I’m extremely disheartened by this.”

Ide said she understands the administration’s concerns about bond debt. But she also suggested that Shook might get support for a nonbinding resolution suggesting that the next council not exercise the poison-pill option. “I certainly hope the whole city stays intact and this is something that is never necessary,” she said.