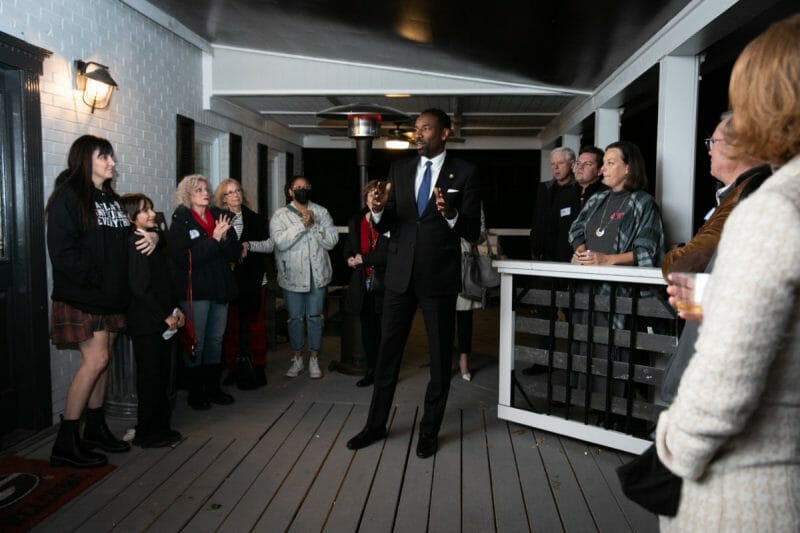 Mayor-elect Andre Dickens made his first official visits to Buckhead this week, starting with cityhood opposition events followed by a virtual meeting with neighborhood association leaders.

Dickens has yet to meet with the pro-cityhood Buckhead City Committee (BCC), but says he is open to it. But the BCC’s leader is calling Dickens “100% dishonest” on the cityhood issue for some of this week’s comments.

Dickens began the Buckhead visits at a $1,000-per-person fundraiser Dec. 8 for the anti-cityhood Committee for a United Atlanta (CUA). He was reportedly joined by City Council President-elect Doug Shipman and several City Council members, as well as such business leaders as Arthur Blank.

Buckhead.com chose not to cover that fundraiser after being told by CUA that attendance would have to be conditioned on keeping any comments made there “off the record,” meaning unpublished in any form. While the CUA said that other journalists had agreed to attend on that condition, the Atlanta Journal-Constitution published a story quoting or paraphrasing several people there, including Dickens, who reportedly said a strong political campaign and a good start to his administration would quell the cityhood legislation.

CUA co-chair and lobbyist Edward Lindsey later estimated that the event raised money in the “six figures.” The BCC has said it has raised around $1.5 million.

The next stop for Dickens was a Dec. 9 kick-off meeting of Neighbors for a United Atlanta, a new community-based cityhood opposition group that is aligning itself with the more boardroom-centered CUA.

The event included several other elected officials, including state Rep. Betsy Holland (D-Atlanta), a Buckhead resident; City Councilmember Matt Westmoreland, who holds the Post 2 at-large seat; Atlanta Board of Education chair Jason Esteves, who is running for the local District 6 state Senate seat; and BOE member Cynthia Briscoe Brown, who holds the citywide District 8 seat and formerly headed North Atlanta Parents for Public Schools (NAPPS). The school board and NAPPS have declared opposition to cityhood. Also in attendance was Jim Durrett, president of the Buckhead Coalition and executive director of the Buckhead Community Improvement District.

A Dickens spokesperson summed up his attendance at that event by saying he “is committed to keeping Atlanta one city with one future and will work closely with those with the same goal.”

On Dec. 10 came the virtual meeting with neighborhood leaders within City Council District 8, arranged by its representative, City Councilmember J.P. Matzigkeit. According to the Dickens spokesperson, other speakers included Westmoreland; Mary Norwood, the City Councilmember-elect to that seat; and Atlanta Police Department Maj. Andrew Senzer, the commander of Buckhead’s Zone 2 precinct.

A partial video of Dickens speaking at that meeting about cityhood was posted on Instagram by Bill White, the BCC’s chairman and CEO.

“I believe that we shouldn’t separate, and if you want to separate, that’s separatist to me,” Dickens said in the clip. “So I’ll stand by that. I want to be one city with one future, and I’m gonna push hard toward that.”

In the post, White complained about Dickens’ use of the term “separatist”; claimed he had called cityhood backers dishonest; and said he had no policy solutions.

“He has no intention of meeting with us. He is being 100% dishonest in his words and actions,” White wrote. “… See you at the ballot box, Andre.”

Asked if the mayor-elect intends to meet with the BCC, the spokesperson said, “We’re open to a meeting.”