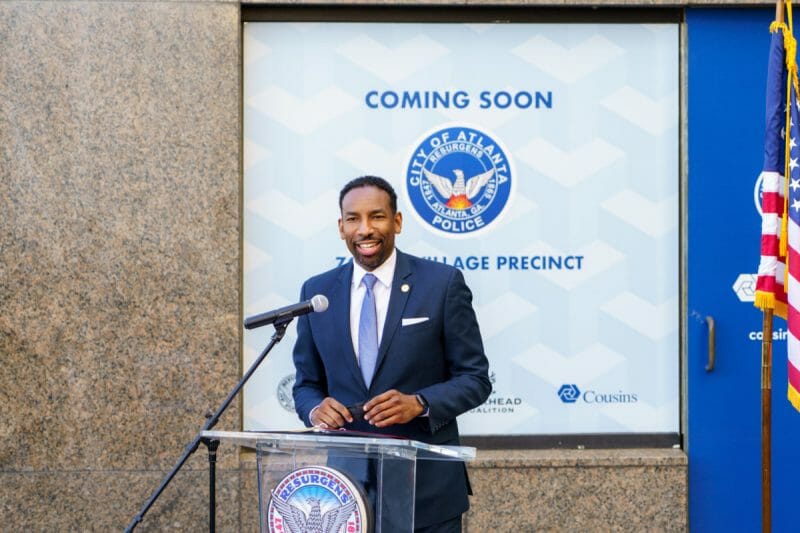 New Mayor Andre Dickens made two Buckhead appearances Jan. 13 — one at a publicity event touting a future West Village police precinct, and one a surprise virtual visit to the Buckhead Council of Neighborhoods.

The appearances were part of Dickens’ campaign promise to pay more attention to Buckhead, both to counter the local cityhood movement and to improve Atlanta government services in general. Dickens spoke to BCN from City Hall, where he and other officials said they were meeting late with nonprofits addressing services to young people, including so-called water boys.

Meanwhile, the pro-cityhood Buckhead City Committee has dismissed Dickens as dishonest and unreliable on the crime issues driving the movement’s politics. In that vein, the BCC revealed the politically damaging arrest of Dickens’ former chief of staff, Ali Carter, days before the mayor’s Jan. 3 inauguration. Carter, who reportedly is no longer on the mayoral staff, was arrested on an airplane at Hartsfield-Jackson Atlanta International Airport on Dec. 29 because he was wanted on a warrant for a charge of terroristic threats related to a domestic incident. But the BCC lost political momentum with that revelation by coupling it with an unsubstantiated claim that the Atlanta Police Department is lowering its hiring standards to meet Dickens’ recruitment goals. That led APD to publicly bash the BCC for a “misinformation campaign.”

The BCC’s attacks on Dickens also have been politically blunted by racially themed social media posts from Bill White, its chairman and CEO, including one calling Dickens a “racist” and another reposting a white-nationalist-affiliated website’s comments linking urban murder rates to Black populations. Swift public backlash led White to apologize for the latter post.

A Jan. 13 press conference touting the new West Village APD mini-precinct was pure political theater coinciding with the start of Dickens’ administration and the General Assembly session where cityhood legislation is being considered. The precinct was already announced back in September under the administration of former Mayor Keisha Lance Bottoms and it is not scheduled to open until sometime in the summer.

The event was a chance for Dickens to be seen in the neighborhood backing public safety along local organizations who are helping to fund it and who also oppose cityhood.

Buckhead is covered by APD’s Zone 2 precinct, which is based on Maple Drive and also has a mini-precinct within the Lenox Square mall as a base for officers. The new West Village precinct is within One Buckhead Plaza, a recently renovated mixed-use center at West Paces Ferry and Peachtree roads. The office will be along West Paces Ferry, below the King + Duke restaurant.

“It is important that everyone in our city feels a sense of security as our police continue to combat crime wherever it exists,” said Dickens, who spoke outside of the building to attendees, such as City Council President Doug Shipman and several City councilmembers, including Mary Norwood of Buckhead’s District 8.

He was joined by several APD officials, including Chief Rodney Bryant and Zone 2 commander Maj. Andrew Senzer. Bryant said at least 12 officers will be assigned to the mini-precinct. Senzer said the facility will be “a tremendous asset in Zone 2” and that responding to traffic incidents will be a focus.

Cousins Properties, the owner of One Buckhead Plaza, is leasing the space for what a press release called a “nominal fee.” The Buckhead Coalition and the Buckhead Community Improvement District are contributing $150,000 for the build-out. (The CID’s board chair, Thad Ellis, is a Cousins vice president.) Both organizations also oppose cityhood. Their mutual leader, Jim Durrett, appeared at the press conference.

The Coalition and the CID were among the organizations that in late 2020 launched a “Buckhead Security Plan” aimed at tackling rising crime before the cityhood effort gained political momentum.

A tremendous amount of work to enhance safety has been done over the past year and we are beginning to see a return on that investment,” Durrett said in a press release. “There’s still a long way to go, but it’s clear that city leaders have heard Buckhead’s concerns and are working to address them.”

That evening, Dickens made an unscheduled but warmly welcomed visit to the BCN. City officials frequently speak at the meetings of the coalition of neighborhood associations, but a mayor has not appeared in years.

“I greet you and say hello on this very first BCN meeting of the year. I wouldn’t miss it for the world,” said Dickens. He promised his administration will “show up early and often” in the neighborhood and said he will remain available to the community “and solve our city’s problems together.”

“And thank you for asking,” said BCN Chair Debra Wathen. “We look forward to being in partnership with the Mayor’s Office.”

Dickens said that he and some other elected officials on the call — including at-large City Councilmembers Keisha Sean Waites and Matt Westmoreland — were speaking from City Hall, where they were meeting with representatives from around 75 nonprofits that work with young men on “solutions to keep them active and progressing toward career and life goals and to keep them out of trouble.” Waites later specified that includes the “water boys,” or young people who illegally sell bottled water on the streets. The practice drew significant City and policing attention in the past two years and was among the sources of crime complaints driving the cityhood movement.

Norwood, who also was in attendance, praised Dickens for that effort, saying that “our young people deserve it, our city deserves it.”

Wathen had invited Dickens to speak to the BCN but had not expected a visit so soon in his administration.

“I really appreciate the mayor speaking to us,” she said. “I think it really shows he is listening to us…. I feel honored he took the time to show he really does care about us.”