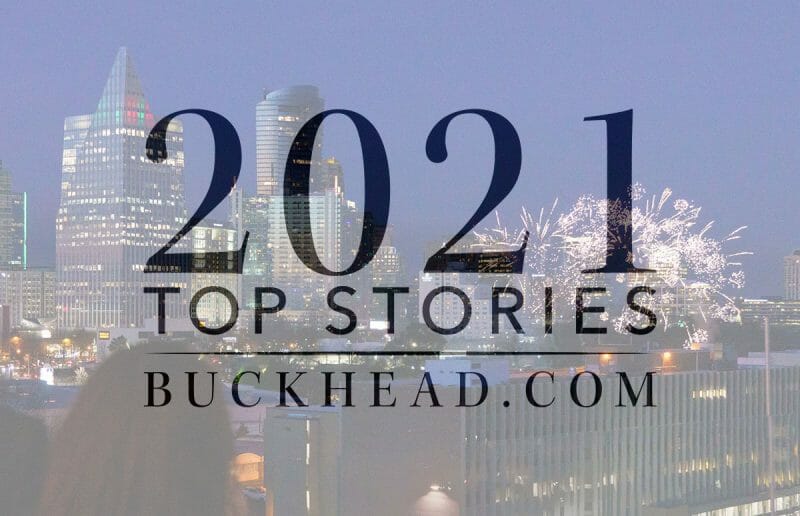 At Buckhead.com we cover a mix of stories about the people, places, and events that make up Buckhead. Below are the most popular stories on our site for this year. As we head into a new year, you can count on us to cover all of the things that make Buckhead such a vibrant and interesting place to live!

This story about zoning changes understandably got the attention of many residents. It pre-dated much of the Buckhead Cityhood movement and the underlying effort to increase density by changing zoning rules is arguably one of the sparks that lit the cityhood fire. 10 months later our news editor John Ruch wrote this in-depth update on how influence from Buckhead voters had seen partial success in altering the proposals: City Proposals For More Housing Density In Single-Family Areas Change With Buckhead Input, and more recently how the ADU legistlation disliked in Buckhead is dead, for now.

2. Who Are The Twins Of Buckhead?

Even though we revealed who the Twins were 18 months ago, they have continued their synchronized walk through Buckhead ever since…and people continue to ask Google who they are, making this profile our 2nd most read story of 2021. Word has it that two have relocated to Palm Beach in recent weeks. Gone, but apparently not forgotten.

Who does not like to read about beautiful homes? Buckhead has plenty of them, but this October 2021 off-market sale set the all-time record for Atlanta!

The idea of Buckhead becoming its own city has really taken off this year, and the process is well underway. We are covering all of the major developments closely with popular in-depth stories and analysis at our Buckhead City News page.

As we head into 2022 and both sides intensify their campaigns, you can be sure that this will be the top story in all of Georgia this year. National media will latch onto the issue for inflammatory soundbites only… avoiding the substance that matters to you and me. Social media will amplify the uglier aspects as tensions rise…. but what will you do?

For the good of Buckhead, city or not, let’s not damage our wonderful community spirit in this process. We are neighbors first and everything else is second.

We lost the architect Bill Harrison this year. Although Bill had renown, offices, and staff around the country, he made his biggest impact in Buckhead, where he was a prolific designer, developer and builder of countless homes throughout our community since the 1970’s. He literally reshaped pockets of Buckhead and many of our readers were saddened to hear of his passing.

6. The New Kimpton Sylvan Hotel Offers A Lot For Locals To Love

Readers were excited to read about the opening of the new Sylvan hotel in the heart of Buckhead. The restored mid-century modern building includes dining and drinking establishments The Betty, Willow Bar, and St Julep. Our creative director Rob Knight covered this with some spectacular photography. Two weeks ago he also covered the opening of The Thompson Hotel just across the street.

7. Cranes Are In Full Swing At Phipps Plaza

Initially paused by the pandemic, everyone was excited to see construction resume on the Phipps Plaza development of a new Nobu Hotel/Restaurant and a flagship Life Time Fitness. Now the entire site is bustling with activity and we hope to have an exciting update for you soon.

8. One Of Atlanta’s Founding Families Puts Their Final Buckhead Land Holdings On The Market

When one of Atlanta’s founding families put their final land holdings on the market, it provided a great opportunity to delve deeper into our own history and the story behind the Cherokee Town Club on West Paces Ferry.

Everyone loves the Beltline and it is exciting to watch as it gains momentum with connections and expansions throughout Buckhead!

Buckhead is known for its connection to nature. The juxtaposition of green space and modern amenities is one of the things that makes Buckhead unique. It makes sense that #10 on our list is a list unto itself: our top 5 favorite places in Buckhead to hike and explore in the winter.