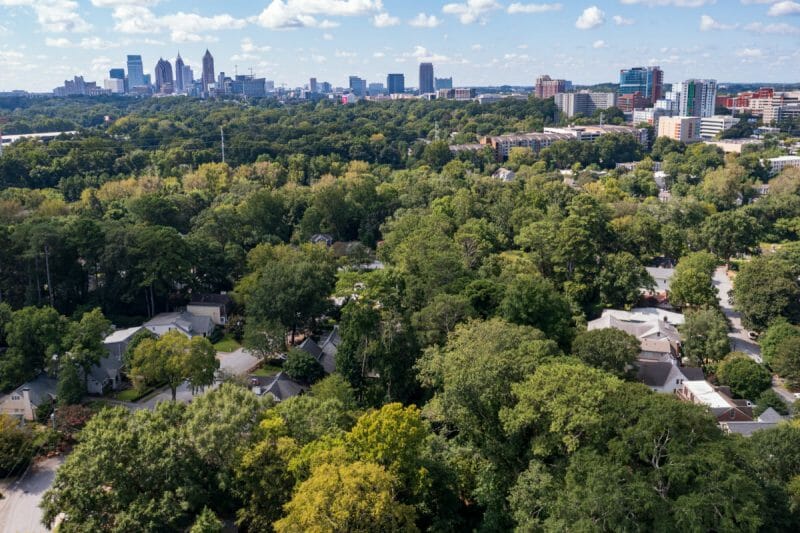 The City’s controversial proposals to increase housing density in some single-family areas continue to morph with significant Buckhead influence.

The next big steps include a Sept. 27 City Council committee hearing on the latest draft Comprehensive Development Plan (CDP) and October votes by the Neighborhood Planning Units on several zoning changes, including the allowance of more accessory dwelling units. Meanwhile, the City has just delayed an NPU vote, also previously slated for October, on another zoning paper that would permit small apartment buildings within a half-mile of transit stations.

Buckhead has been one — but far from the only — hot spot of concerns about the various proposals. The debate has become at times emotional and personal, for both community groups and the City. “We were misled,” complained Buckhead’s NPUs in a letter about the CDP draft, calling it overblown and confusing. City Planning Commissioner Tim Keane in a recent Atlanta Civic Circle interview made scathing remarks that singled out Buckhead critics, saying “their only interest is in creating fear and confusion” and that they are motivated by the cityhood secession movement.

Nonetheless, the criticisms have led the City to reduce the scale, slow the timeline and increase the public input of many of the changes. On the other hand, the City is still forging ahead with the overall concept, saying that Atlanta must be prepared to handle a projected population boom, to deal with a housing affordability crisis, and to address historic income equality and segregation.

The Atlanta Preservation Center is among the groups attempting to be a netural information broker and peacemaker in the debate. In part, that’s because the changes could implicate historic districts and is ultimately about the longterm identity of the city in a way similar to how preservation groups think. The APC also happens to be working in Buckhead with Garden Hills activists who are attempting to preserve from dense luxury redevelopment some old-school small apartment buildings of the kind that inspired the City’s idea of building more of them near MARTA. Among the APC efforts in the works are a virtual Q&A with City Councilmember Amir Farokhi, chair of the council Zoning Committee, who introduced the controversial zoning legislation.

APC Executive Director David Yoakley Mitchell says that a cooling off and mutual  understanding would help the debate. “Everyone needs to get over their victimhood status,” he said. “This isn’t an anti-Buckhead movement, an anti-Candler Park movement…” At the same time, he said, the City needs to understand that some neighborhoods would be affected more than others and that faith in government under the current administration is low. “When you have a problem with trash pickup, how do you expect people to be rational about their house being turned upside-down?” he asks.

Mitchell said the north star should be Atlanta’s identity now and in the future — whether it will reflect, say, the cradle of the Civil Rights movement or the short-term financial interests of property owners and developers. “Go outside all of the legalese. This is a cultural discussion,” he said. “… The soul of the city is the core question.”

A guide to proposals and their timing

There is, nonetheless, a ton of legalese. The various proposals are full of jargon and issued under a bland numbering system. Keeping track of it all can be a challenge. In simplest terms, there’s the CDP, which is a planning vision that informs the rules of the zoning code. Then there is the zoning legislation filed by Farokhi, which is intended to get a head start on some of the CDP’s concepts.

Here’s a guide to what each proposal is and where it stands in the process. For extensive details about the CDP, including answers to public questions and an interactive map, see the Department of City Planning’s website. City Planning also has similar details about zoning legislation on its website.

What it is: A CDP is a development planning document that all cities are required to file with the state and renew every five years. Atlanta’s CDP is due for renewal this year, with this edition nicknamed “Plan A” by the City. The controversy involves the CDP’s incorporate of density-related housing ideas previously floated by the Department of City Planning. The City considers the CDP update to be a basic one, especially because full public input did not happen during the height of the first wave of the COVID-19 pandemic. So the City is promising a more detailed “Phase 2” of CDP changes through a bigger public process that essentially will inform the 2026 update.

Where it stands: The first draft of the new CDP was released June 8 and the second draft July 27. A third draft is expected Oct. 1 and the City Council could vote to adopt it that month. But first, the latest draft will be reviewed by the council’s Community Development and Human Services Committee to hold a hearing Sept. 27 at 6 p.m. (Residents can call 404-330-6021 to record their comments ahead of time on Sept. 26, 4-7 p.m.)

As for “Phase 2,” that public process is expected to begin sometime next year and last at least 18 months. The same council committee is expected to be presented with a public engagement plan for that process early next year.

What is is: This is the legislation that would enable “proactive rezoning” of certain R4, R4A and R5 properties (a.k.a., 1- and 2-family residential lots) within a half-mile walking distance of a transit station to MR-MU. That zoning would allow construction of small apartment buildings: 1 to 4 units, or up to 5 to 12 if certain amounts of middle-income-affordable units are included. This has been among the most controversial proposals.

Where it stands: The next steps are consideration by NPUs and the Zoning Review Board. NPU votes were previously scheduled for October, but on Sept. 24, the City announced the proposal has been delayed for an undefined period to get more neighborhood input. That means it is unlikely to move on to the City Council for consideration until December at the earliest.

“Our teams will hold neighborhood meetings with each neighborhood in the half-mile walkshed of MARTA stations over the coming weeks and months to discuss the proactive rezoning and work with neighborhoods on how to best move this work forward in their communities,” said Keyetta Holmes, the City’s director of zoning and development, in an email to NPUs.

What it is: Related to the proactive rezoning for small apartments near transit, this legislation is a land-use amendent to the CDP that would conduct the actual rezoning of specific properties around the city to Low-Density Residential (changed from the original proposal of Medium-Density Residential). In Buckhead, that would include certain properties in two areas. One area is in Garden Hills and Peachtree Hills along Lindbergh Drive, Eureka Drive and Sharondale Drive. The other area is in northern Peachtree Park along Arc Way, Highland Drive, Martina Drive and Park Circle.

Where it stands: This legislation also was scheduled for an October vote and also delayed Sept. 24 for further input.

What it is: This zoning ordinance text amendment would do a number of things. It includes some definitions related to the proactive rezoning for apartments near transit; removes minimum parking requirements in all residential zoning districts except R1-R3; and creates more options for accessory dwelling units (ADUs), like basement and above-garage apartments. The expansion of AUDs also has been controversial.

Where it stands: This legislation remains scheduled for an October NPU vote; Buckhead-area NPUs A, B and C all are scheduled to meet Oct. 5. A ZRB hearing would be the next step, and a City Council vote probably would come no sooner than November.

What’s changed in the CDP?

The CDP drafts have seen significant changes in response to public input and debate. A major change from the first draft was a stepping-back on the ADU proposals, allowing them only in some areas rather than citywide and killing plans to eliminate minimum lot sizes and allow subdivisions for ownership ADUs.

The second draft has drawn strong comments as well, including the Aug. 26 letter from NPUs A, B and C, which also drew signatures from NPUs G and I in Northwest and Southwest Atlanta. That letter complains that the CDP update is not in fact the basic, legally required minimum, but rather introduces many changes and new ideas and presents them in long narratives that make it “overwhelmingly confusing and unnecessary.” The NPUs also criticized the CDP as ignoring the Atlanta City Design — an urban planning vision adopted by the City in 2017 — and failing to address increased density’s impacts on the tree canopy, infrastructure and schools.

The Georgia Department of Community Affairs also provided comment, in a legally required step, which echoed the concerns about confusion and length. According to City Planning, the DCA said next draft needed to continue work on “the plan’s brevity, clarity, and functionality.”

As a preview of the next draft, City Planning says it agrees with DCA that it should be more concise and clear. But it believes this version is indeed a minimal version that will be fleshed out later and that it reflects the Atlanta City Design.

City Planning also agreed with some criticisms that the CDP must address how growth will be balanced with environmental and other impacts, and how to match infrastruture demands like stormwater and roads with growth. The “Phase 2” work next year will address those issues in depth, the department says.

What’s changed in the zoning legislation?

Farokhi said that amendments to the various pieces of zoning legislation have been proposed and floating to the NPUs. As of late September, those included the following as provided by Farokhi: