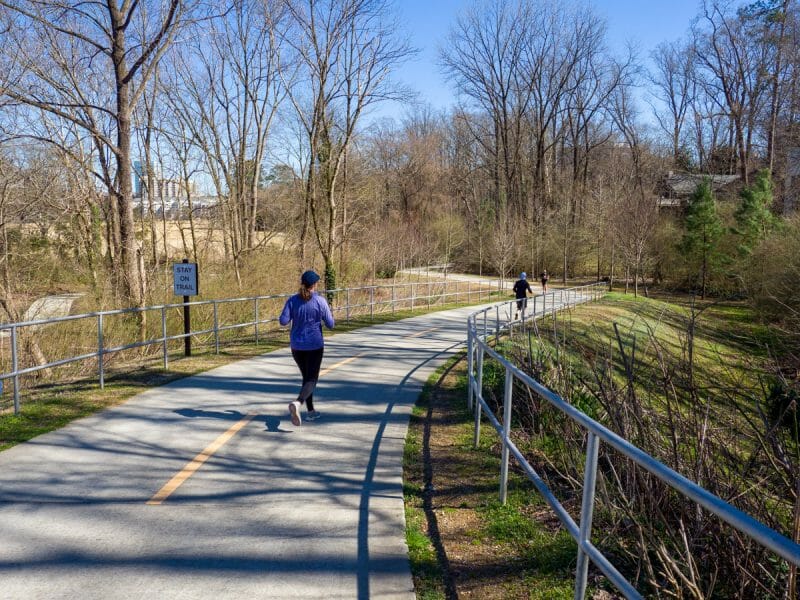 The Atlanta BeltLine’s Buckhead connections are coming with unprecedented momentum. But it’s still going to be a long and winding path to get there.

By 2030, planners say, you’ll be able to ride a bike on a multiuse trail from Bobby Jones Golf Course to Piedmont Park, the new Westside Park, and beyond on the 22-mile loop around the city. And by 2050, they promise, you can ride a MARTA light-rail train on more or less the same route, too.

But exactly where and when those connections come to Buckhead remain huge questions. Answers are being developed in public processes by Atlanta BeltLine Inc., the organization planning and building the system.

Buckhead will have two main sections of BeltLine trails: the Northwest Trail and the Northeast Trail. They will run somewhere through southern Buckhead and meet in the area of Armour Yards. Each trail has a separate planning process in different stages of figuring out the exact route.

The light-rail transit will run near the trails. It’s farther behind in planning, with no public meetings yet.

Buckhead’s bits are especially complicated because of the dense network of streets, highways and train lines. ABI is working to have trail plans ready for a design phase by around early 2022, but even then, construction likely would be around three years from starting.

Wherever it ends up, Buckhead’s piece of the BeltLine is sure to spark real estate development along its route, as has happened on already-opened portions on the Westside and Midtown. ABI also plans to build affordable housing to mitigate gentrification. In late 2020, ABI bought two parcels at 579 Garson Drive, just off Piedmont Road in Lindbergh/Morosgo, for future affordable housing and trail development.

The BeltLine won’t be the only trail in the area and is intended to connect into a wider network. Those include Buckhead’s PATH400, which has a connection to Sandy Springs in the planning stage, and the South Fork Conservancy’s trails, which also are reaching out even further to such locales as Brookhaven’s Peachtree Creek Greenway. Planners say that another trail-building group, the PATH Foundation, may build even more trails as connectors on routes that end up rejected for the main BeltLine.

Here’s where Buckhead’s BeltLine planning stood as of mid-2021. For more about the overall project and upcoming meetings, see beltline.org.

The BeltLine is a plan for a 22-mile loop of trails, public transit and green space around the city’s core. Largely a way to reuse long-vacant railroad lines, the idea is to better connect various neighbors and spur economic development. Two major sections, each about 3 miles long, are already open: the Westside Trail between Capitol View and Washington Park, and the Eastside Trail between Reynoldstown and Midtown. Several smaller connections and “spurs” are also open, including some in Buckhead.

Work on the BeltLine has been underway for roughly 15 years, but slowed recently due to funding problems. ABI has a new burst of trail planning — including the Buckhead connections — thanks to this year’s approval of a new “special services district” where commercial and apartment properties roughly within a half-mile of the BeltLine corridor will get a 2-mill tax increase.

What parts of the BeltLine are already open in Buckhead?

The Northside Trail, running between Ardmore Park and Atlanta Memorial Park through Tanyard Creek Park, opened in 2010. Another segment called the Northwest BeltLine Connector, running along Bobby Jones Golf Course and the Bitsy Grant Tennis Center in Memorial Park, opened in 2018. As the name implies, the Connector will tie the Northside Trail to the main BeltLine Northwest Trail.

Where will the Northeast Trail go?

The Northeast Trail will connect Buckhead’s Lindbergh Center MARTA Station to Piedmont Park at the existing Eastside Trail. Gravel-covered or otherwise semi-finished parts of the trail are already open for much of that route until it hits I-85 and Buckhead at Armour Yard.

Planning the Buckhead end of the route has been a tortuous process due to tight spaces. In May 2020, ABI revealed a preferred route to the public, but almost immediately ran into objections from Norfolk Southern Corporation, the railroad company whose tracks run through the area. In July 2021, ABI said the railroad’s objections had killed the original route, and a new one was unveiled. Even that could change as design continues.

The current plan runs the main Northeast Trail from an existing railroad bridge and tunnel at I-85 to the area of Peachtree Hills Avenue, with a new pedestrian bridge spanning train tracks and Peachtree Creek. From there, four separate spur trails would run to local destinations: Lindbergh Center, the Armour/Ottley commercial area, Armour Drive, and Adina Drive, where PATH400 terminates. The future Northwest Trail likely would connect with the Northeast Trail in the same Peachtree Hills Avenue area.

ABI says it has secured $109 million for Northeast Trail construction, which would not include three of the four spurs, so more money must be found. The tentative timeline is for a final design to emerge in 2022 and construction contracts to be issued in 2024.

Where will the Northwest Trail go?

The Northwest Trail will run roughly 4 miles between the Northeast Trail and the area of Huff Road and Westside Park. The existing Northside Trail will plug into it.

The Northwest Trail is in a much earlier planning stage than the Northeast Trail and also has to navigate a maze of existing highways and train tracks, including I-75.

In the latest design update meeting in August, ABI and its partner, the PATH Foundation, said they are looking at several broad alternative routes: four for connecting the Westside to Memorial Park, and two for connecting Memorial Park and the Northeast Trail.

On the western side, two of the options would run the trail beneath I-75 on a railroad corridor to the east of Northside Drive, and connect to Ardmore Park and the Northside Trail. The difference between those options is where they connect to the BeltLine in the west, with one going to Blandtown and another going to Bankhead.

The other two options both start in the Blandtown area and head farther north, crossing I-75 with a pedestrian bridge at Underwood Hills Park. From there into Collier Hills, the options diverge. One runs through the area of Springlake Park and connects to the tennis center area. The other runs through the area of Spring Valley Park and connects to Tanyard Creek.

As for the eastern connection between Memorial Park and the Northeast Trail, there are two main options: one running along Peachtree Creek’s winding course, and the other along Bennet Street and Peachtree Park Drive.

ABI produced some dramatic conceptual illustrations of such ideas as the bridge over I-75, but the plan is nowhere near actually proposing anything. ABI and PATH say they are still vetting the alternative routes on such criteria as trail user experience, safety, connectivity, feasibility stakeholder/property owner support, cost, and time of completion. The goal is to propose a route by the end of the year and start a design phase.

What about the transit?

ABI has said that the transit part of the BeltLine likely will run mostly on a separate route from the trails in Buckhead due to the tight conditions and current use of existing rail lines. Transit is being studied separately for both the Northwest and Northeast corridors.

MARTA is conducting a feasibility or engineering study of the entire BeltLine, expected to continue through this year, with the Lindbergh Center area among its focuses. ABI’s trail design there already means that the trail and transit would be forced to share a bridge over I-85, where the tight space means the train could only be single-tracked.