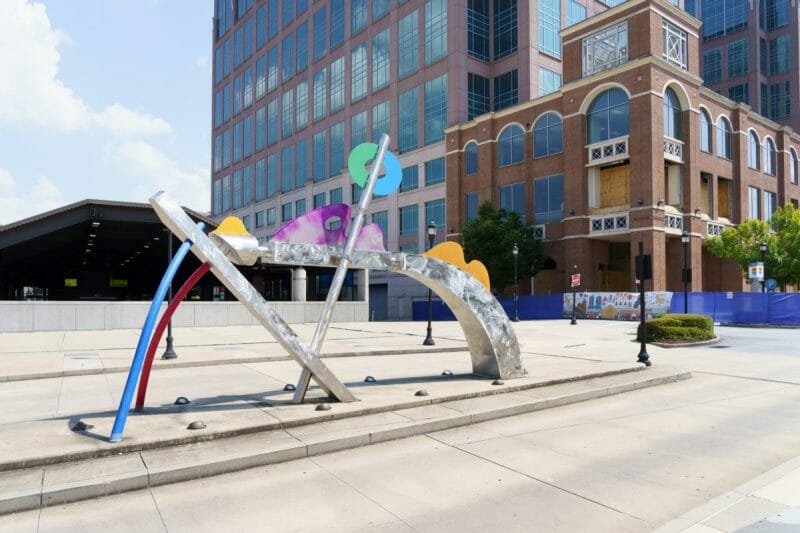 Twenty years ago, MARTA embarked on a visionary plan for a mixed-use, transit-oriented “City Center” around Buckhead’s Lindbergh Center Station. Not a failure but far from an inspiring success, the result has been a significantly car-oriented convenience spot rather than a major attraction atop the busy Red and Gold Lines.

Now a new developer, Rubenstein Partners, is rebranding the 47-acre mega-complex once called Lindbergh City Center as “Uptown Atlanta” and remaking the office, commercial and green spaces with an emphasis on the unique. (The new name is simply meant to localize the place in contrast with Buckhead and Midtown.)

“All of the people that are reading your article are going to want to know, what’s the benefit to the community?” said Taylor Smith, Rubenstein’s Southeast regional director, in a recent interview. “And I think we’re trying to deliver on a promise made long ago that this is going to be a place for them.”

Those changes will be more obvious as new tenants appear over the next 12 months, but several are planting roots already. Office towers once home to AT&T will soon host an esports company’s video game competitions. A North Georgia arts program operating pop-up exhibits will become a long-term tenant. A Lindbergh Drive lawn will become a park and is already hosting yoga and artist markets. A shuttered Chili’s will become Uptown Test Kitchen, a restaurant whose “unique” concept, Smith says, is still under wraps for now.

Eclectic and arts-oriented businesses are the theme. It’s no surprise when Smith reels off some of the inspirations: Ponce City Market, Krog Street Market, Alpharetta’s Avalon complex, and especially Colony Square, the Midtown mixed-use center that some of the Rubenstein team also worked to renovate in recent years.

MARTA, which continues to own all of the land, says it’s “excited” to partner with Rubenstein on the “ongoing renovations, activations and programming.”

“Rubenstein and its leasing and marketing teams are bringing much-needed energy and ideas to this TOD [transit-oriented development],” said MARTA spokesperson Stephany Fisher.

Another partner is StationSoccer, a program co-sponsored by MARTA, the City, the Atlanta United Foundation and a nonprofit called Soccer in the Streets. The program involves building soccer fields at MARTA stations with the idea of having community leagues form. Lindbergh has one of the first fields, along with Five Points and West End.

The old Lindbergh City Center was never completely developed and never truly sparkled with what was there, with the single-tenant office building dominating the scene. “You had AT&T there and very little retail that was successful. So it never got to the critical mass you needed for people to go there,” says Smith. But, he says, MARTA transit-oriented vision was still something special and a strong anchor for the future.

Uptown Atlanta includes the blocks west of Piedmont Road between Morosgo Drive and Lindbergh Drive, as well as MARTA headquarters and the station garage along Sidney Marcus Boulevard. Rubenstein’s acquisition did not include the two apartment complexes there: Eon at Lindbergh and Avana on Main.

Besides the existing station, there are other big transportation plans headed Uptown’s way. The Atlanta BeltLine’s Northeast Trail and light-rail transit, still in the planning stages, will connect there one day. And MARTA is planning the Clifton Corridor light-rail line, which would run between Lindbergh and the Blue Line’s Avondale Station through the Emory University area. All of this activity led the City to launch a “Lindbergh-Armour Master Plan” to develop a vision for the larger neighborhood, but that effort was delayed earlier this year. The City did not respond to an update request and MARTA and Rubenstein said they have no updates on that process, either.

Rubenstein is not building any new structures, though Smith says the hope is that developers will follow suit on surrounding properties and expand use of the Uptown Atlanta name. MARTA never finished developing all the property it owns around the station as part of the original plan. It could partner with other developers to build elsewhere on the site and has tried before.

The most recent effort was a 2018 plan for a hotel, apartments and retail space at Morosgo and Piedmont, but that deal with a developer fell through. Fisher, the MARTA spokesperson, said the transit agency’s leaders “look forward to initiating future development phases on our holdings” but said there are no details right now. MARTA also has no plans at this point to rename the station for Uptown.

What Rubenstein is doing involves renovating interiors, exteriors and public spaces, and enlivening them with programming. A big lift is the nearly 1 million-square-foot, twin-towered office building, which is completely vacant now that AT&T is gone. Skillshot Media, the Alpharetta-based esports company, will occupy the atrium and other areas, but office will be a major component going forward in a building whose amenities will include an 8,000-square-foot conference center, a fitness center of similar size, and an in-house coffee and wine bar. The pandemic’s teleworking has thrown office occupancy rates for a loop, but Smith says it’s still a good investment and a mixed-use environment is an important anchor. “As far as the future of office, I’m a believer it’s not dead, it’s not going away,” he said.

Another part of the work is clearing out some older commercial tenants. Smith said that “we’ve been intentional about … forcing [tenants] to vacate and having some former tenants leave, and the purpose is to replace them with more hyperlocal, chef-driven and farm-to-table restaurants and specialty retailers. We’ve got to clean the slate a little before we can rebuild.”

Shortly after the interview, a Taco Mac sports bar that was a longtime tenant at 573 Main St. shuttered, reportedly saying in an email to customers that crime and loss of neighboring restaurants were to blame. In a written statement, Smith did not directly address those claims but referred to the overall intent to bring in new restaurants.

Another longtime tenant is Pike Nurseries at Camellia Lane and Lindbergh Drive. Smith said he expects Pike will remain through the term of its lease, which he would not specify, and then the longer-term future could be considered. “That’s a neighborhood asset,” he said of the business.

Some of the incoming tenants are bullish on the Uptown future.

Skillshot CEO Todd Harris said it’s perfect for his company, which stages video-game events and competitions for both in-person and live-stream internet audiences.

“Esports is about competition, but even more so it is about community,” Harris said in an email. “At Skillshot, we have a hybrid approach where some competitions are played online and others in person. For the highest experiential impact, we have people gather in person to play and to watch others play. Global events attract tens of thousands of people, but there are also more frequent regional events that may draw hundreds or a couple thousand. When selecting a site we considered transit — how convenient is the location to get to, and community — to what extent the site is mixed-use and fosters community.”

Skillshot aims to open a production studio in September and already a soft opening for a training room where students from such universities as Georgia State are taking for-credit classes in the production side of e-sports. Skillshot hopes to start hosting live events in the atrium later this year.

The Hambidge Center for the Creatives Arts & Sciences has been hosting art shows and events in pop-up fashion at Uptown since 2020 and hopes to make a long-term home there.

“They certainly have all of the elements,” including great neighborhoods, parking and “being able to get there via MARTA is fantastic,” says Dayna Thacker, the Hambidge Center’s director of programs and marketing.  “We do intend to grow with Uptown. We intend to have long-term space there.”

Located in tiny Rabun Gap, in northeast Georgia near the North Carolina line, the Hambidge Center is a residency program for virtually every kind of artist as well as the occasional chef, arts administrator and scientist. With Atlanta as the state’s artistic epicenter, the center has frequently collaborated on projects here, including at the Goat Farm Arts Center in the Westside and at Colony Square in the similar renovation period.

At Uptown, the Hambidge Center has staged the Cross-Pollination Art Lab, so named for interdisciplinary works among a group of artists and performers. The Art Lab opened in four Piedmont storefronts in 2020 and wrapped up in June after drawing crowds that Thacker says were sizeable, depending on the state of of the pandemic. Now the project is shifting to Lindbergh Lane, across from the station.

“We’re going to have at least one studio residency and certainly a small gallery that we’ll curate,” said Thacker, along with short-term project spaces for installations or other experimental works. That new version of the Art Lab will kick off this fall and run at least into summer of 2022. The Hambidge Center also plans to hold its annual art auction and sale in the office building atrium Oct. 23.

Smith says the Uptown concept is “leaning heavily into arts” with programming and murals, and the Hambidge Center is a big part of that. “So we hope they can find a permanent home in Uptown,” he said.