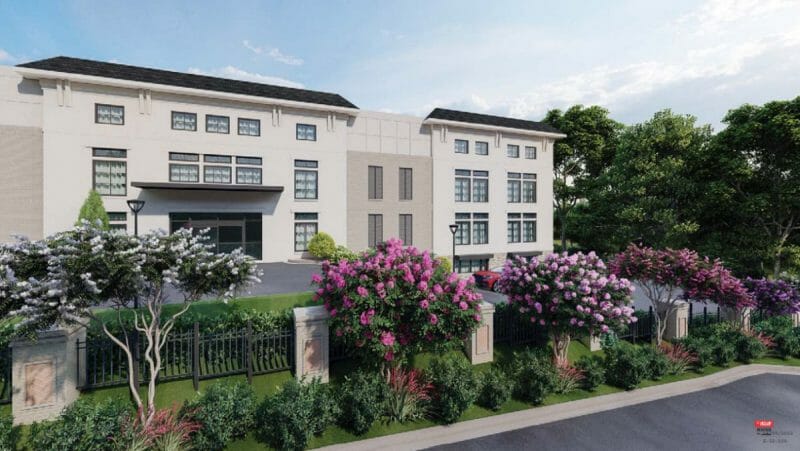 Space Shop Self Storage won approval for zoning and land-use plan changes needed for its proposal at 10 Blackland Road at a May 3 meeting of Neighborhood Planning Unit A after winning extraordinary praise from the local civic association. That’s a big difference from 2018, when a luxury townhome proposal for the former landscaping company site was driven out by unhappy Tuxedo Park neighbors.

Sandy Springs-based Stein Investment Group, the would-be storage facility’s developer and owner, won over locals with major concessions. Among them are a huge wooded buffer, stormwater facilities that will handle the diner’s runoff as well, and a pledge to keep the adjacent 16 Blackland property – held by the same owner – permanently restricted to single-family residential development.

“As you all know, I don’t usually have very nice things to say about developers,” Gloria Cheatham, president of the Tuxedo Park Civic Association, told NPU-A before calling Stein a “huge exception” and a “pleasure” to work with.

The 2-acre property sits about 80 feet down Blackland from the intersection with Roswell and Piedmont roads. Formerly home to Harold E. Bailey Landscaping, it is largely undeveloped and wooded.

Located on a busy commercial corridor and the edge of Buckhead’s most exclusive neighborhood, the property is a hot item for developers – and a crucial transition zone for current residents.

In 2018, Monte Hewitt Homes proposed packing 23 for-sale townhomes onto the site. That drew fire from neighbors concerned about increased stormwater runoff in an area already beset by flooding, and about the precedent for denser housing in a neighborhood known for its expansive estates.

At first glance, a three-story storage-unit complex doesn’t sound much better. But Stein made many concessions, starting with a design that hides the use behind an office-building style facade.

More important to the neighborhood were some extraordinary deals, including establishing a 65-foot-wide, tree-lined buffer – covering roughly a half-acre – between the site and 16 Blackland. Stein’s Jason Linscott said the developers are “effectively creating this hard line permanently” because it would be protected with a conservation easement. Cheatham said the easement would be controlled by a nonprofit that also owns a neighborhood park at Tuxedo Road and Knollwood Drive. The single-family zoning for 16 Blackland also would be deed-restricted.

Also impressing the neighborhood was a promise to create a stormwater detention system about 50% bigger than required to handle some of the diner’s runoff as well as that of the storage facility.

Stein agreed to several other stipulations, such as restricting the operating hours. A landscaping plan includes street trees along Blackland. The plan has two curb cuts on Blackland: a main one directly across from that of a Walgreens pharmacy and a secondary one close to the Roswell intersection that is supposed to be right-turn-exit only.

The property is split between two zoning areas, one commercial and one residential. Stein is seeking to rezone it as an office/industrial category that would include this type of storage facility. That also requires changing the underlying land-use plan.

NPU-A members in attendance approved both requests in 14-0-1 votes. Those votes are advisory to the City, which is still reviewing the project.