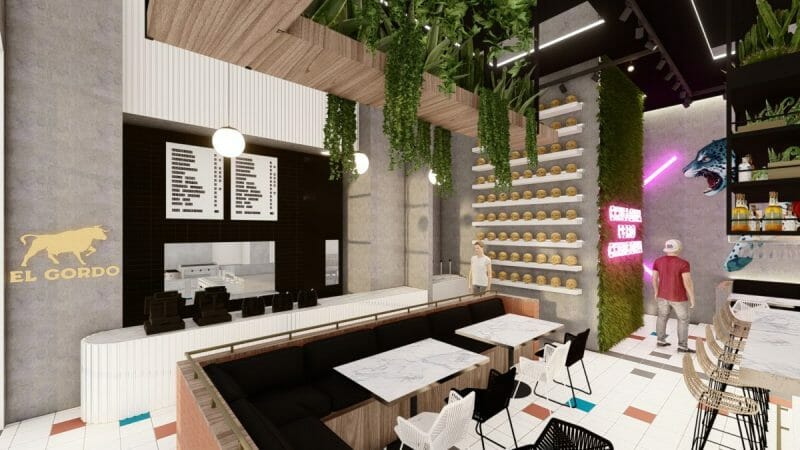 New Korean and Mexican restaurants are scheduled to open this fall in “Uptown Atlanta,” the mixed-use complex around Lindbergh Center station. And new outposts of The Daily and Little Frey are coming, likely next year, in a new restaurant mini-complex in the Northcreek Office Park on Northside Drive.

Here’s what we know so far.

Uptown Atlanta is the new name for the former City Center, the 47-acre complex around the Lindbergh Center MARTA Station along Piedmont Road. As promised last year, a vast renovation project will include some unique restaurants along Main Street, replacing such previous tenants as the Taco Mac chain.

One newcomer is El Gordo, a new concept from the owners of Marietta’s Birria El Gordo. The concept is Mexican food, an outdoor patio with weekly live music and DJs, and “unique tequila cocktails.” Conceptual illustrations of its interior design includes a skull-studded wall and a mural of a leopard.

El Gordo owner Nestor Pineda said in a press release that he was attracted by Uptown’s intent to create a restaurant environment similar to that of the north metro’s famously diverse Buford Highway corridor. “We’re looking forward to inviting Atlantans to experience an old-school taqueria and try some O.G. street tacos and tequila at our new Uptown location,” he said.

The other newcomer is a yet-to-be-named Korean tabletop barbecue restaurant from the owners of Doraville’s Miss Gogi. The location will include a patio and an indoor-outdoor bar.

Uptown Atlanta also announced that 26 Thai Kitchen and Bar will remain in its spot at 541 Main St., from which it has expanded into a north metro chain. It’s getting renovations, including an enhanced patio.

Meanwhile, restaurants are in the works for the four-building Northcreek Office Park at 3715 Northside Parkway on the border of Mt. Paran-Northside and Randall Mill, just north of the Church of the Apostles.

Atlanta’s Vantage Realty Partners is working on a trio of restaurants and a yet-to-be-identified fitness center operator.

Vantage partner Chris Carter said two of the restaurants can be publicly identified. One is The Daily, a cafe with existing locations near the Hemphill Waterworks and another in Charleston, South Carolina. The other is Little Rey, a Tex-Mex quick-service restaurant with an existing location in Piedmont Heights.

Patience will be required, as Carter says build-out of the restaurant spaces likely will come around January 2023. He said the other tenants may be named in about 45 days.