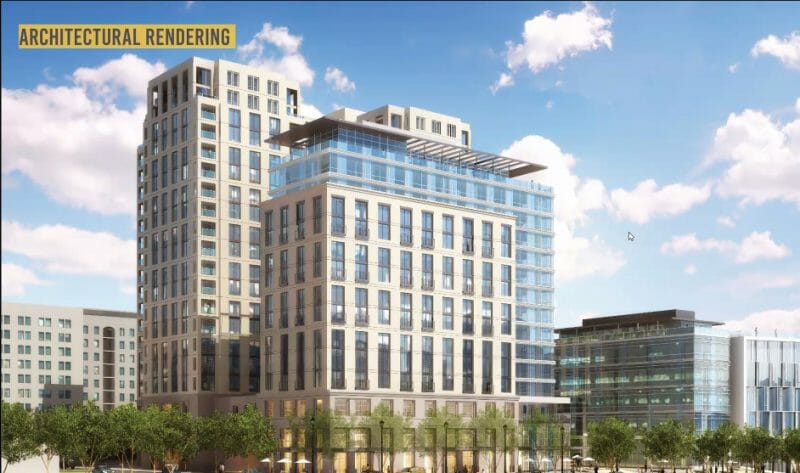 A 20-year-old plan for a massive mixed-use project next to Buckhead’s St. Regis Atlanta hotel is moving forward, with the drawing board including another hotel, an apartment tower and an office/retail building.

Atlanta developers Kent Levenson and George and Ned Burkow are teaming on the project, which was presented at the April 6 meeting of the Development Review Committee (DRC) of Special Public Interest District 9 (SPI-9), a special, detail-oriented zoning district that includes that area of Peachtree Heights West. The developers believe only a special administrative permit (SAP) is required, with no zoning variations, though the City has yet to formally review it. Meanwhile, it got a positive reception from the DRC, with member Sally Silver saying, “I’m looking forward to this phase being completed….”

Rezoning for the original redevelopment scheme dates to 1984 and first produced the existing Buckhead Plaza tower complex, which today is undergoing a renovation as well as playing host to a much-discussed new Atlanta Police Department mini-precinct. Further rezonings focused on the future St. Regis, 92 West Paces Ferry and the strip mall came in 2003 and 2011. A controlling factor is that, in the original zoning, the overall site had a maximum floor-area ratio, or density, so this final piece can only be built with the roughly 580,000 square feet that remains. The developers are seeking approval to rearrange the site plan in part because that is a bit less than previously anticipated, possibly because an earlier phase was “overbuilt,” as attorneys said at the DRC meeting.

The new plan includes three buildings, with the apartment tower atop a parking garage at the rear of the lot and the hotel and the office/retail building fronting on the street. Details include:

The apartment tower and the hotel would be connected with a “ballroom area,” according to the project’s architect, Jenny Williams of Cooper Carry. The hotel would be smaller than the neighboring St. Regis but have a similar luxury approach.

All buildings would have some type of rooftop amenities, such as seating. A pool would sit atop the parking garage.

According to the developers, the zoning allows all of the structures to be up to 225 feet high, but they are avoiding that to create a stepped-down “transitional” effect of lower heights where the site abuts a residential area. The developers filed an SAP application with the City on March 28.

Some neighborhood groups have already seen the plans and weighed in positively, according to Silver. Further review by Neighborhood Planning Unit B is expected, she said.