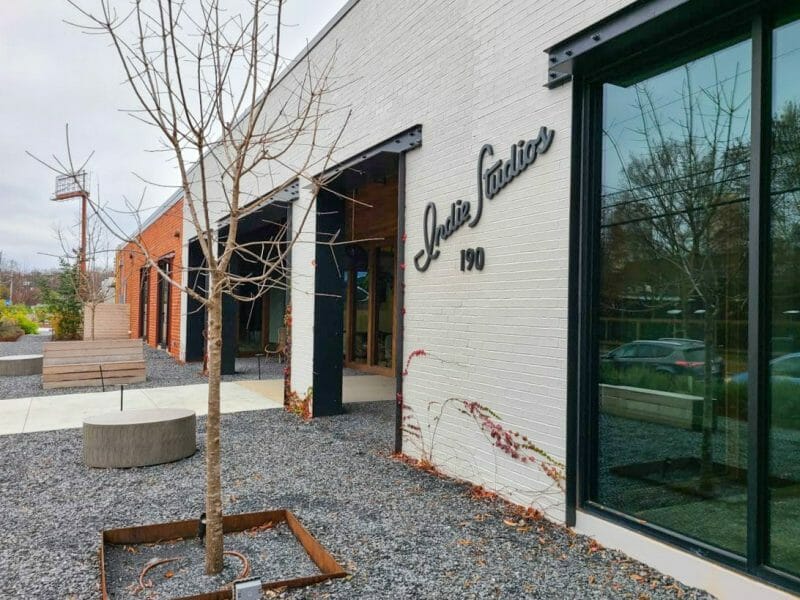 In a soundproofed chamber of a former warehouse in Buckhead’s booming Armour-Ottley business district, a guy in a sensor-covered catsuit is executing martial-arts-style moves, pulling the invisible strings of a virtual reality character on a nearby computer.

His name is Sam Raiffeisen, and for him, it’s just another day at the office of Offbeat Media Group, a digital branding company. It’s one of over a dozen eclectic businesses — from a solar panel installer to a vintage handbag merchant to a collectible card trader — clustered in the new Indie Studios at 190 Ottley Drive, an office complex for creative types. That vibe is part of the draw; so is the location in Buckhead’s southeast corner along Armour and Ottley Drives, where the SweetWater beer brewery across the street was an early 2000s pioneer of warehouse reuse, and where fresh buzz is fueled by the promise of the Atlanta BeltLine coming through within the next decade.

“It’s cool to be this central to all media happenings in the city,” says Alex Punch, Offbeat’s director of content, while watching Raiffeisen gesticulate in the imaginary world they’re creating.

World-building is also the concept of Indie Studios, which opened in January and began assembling most of its initial tenants in April.

“We’re building a community within a community,” says Trevor Arrowood, the complex’s on-site manager. He means a “community of creators” within the Armour-Ottley neighborhood that can network and trade ideas.

Indie Studios is the brainchild of David Minnix, CEO of CineMassive, an audiovisual company whose hallmark product is multiscreen walls (one of which is included in Indie’s screening room). CineMassive is headquartered a couple of doors down, and an LLC involving Minnix also owns the adjacent kitchen space for the nonprofit Open Hand Atlanta, according to Arrowood. (Minnix did not respond to interview requests.) Like many Armour-Ottley buildings, they’re examples of “adaptive reuse” — renovation of historic buildings for different, modern uses, a trend popularized in Atlanta by Ponce City Market but underway locally for years.

In some ways, Indie is like any other office building, with long-term tenants and such shared spaces as a conference room, a kitchen and a lobby for greeting visitors or hosting meetings. In that respect, the difference is Minnix’s curation of tenants who are geared to fitting that independent and creative niche.

Another difference are quirkier shared amenities that make for what Arrowood calls a “boutique, co-shared workspace.” The “inspirational library” of vintage books, magazines and objets d’art — including a vase containing spheres of moss that visitors are welcome to squeeze as living stress balls. The hiply decorated “telephone booths” and “isolation rooms” for making private calls or getting some peace and quiet. The free-to-use bicycles and restrooms with built-in showers installed in anticipation of the BeltLine’s arrival. Not to mention the margarita machine in the back.

Events for outside people and organizations is another feature. Such companies as Mailchimp — the digital marketing giant founded by Buckhead resident Ben Chestnut — hold retreats and other staff gatherings there. Unused suites have hosted “micro-weddings” and kids’ birthday parties. For the general public, the complex hosts occasional “Indie After Dark” events; the latest was a Dec. 9 “Night Market” of artists that included live entertainment and food trucks.

Indie still has some units available and is still working on some of the spaces, such as a building-long patio space that was once a series of loading docks, as are private balconies on the big studios. Also still come is Lil’ Vic, an eatery from Victory Brands, the company behind Victory Sandwich Bar in Decatur and Inman Park; Decatur’s S.O.S. Tiki Bar; and the VCC coffee shop and Lloyd’s pizza joint on DeKalb Avenue. Lil’ Vic will operate in the front of the building and a gravel-covered patio area. Victory owner Ian Jones would offer no details on Lil’ Vic’s concept and timeline yet, but said “people can expect vibes and values similar to our other concepts.”

The current tenant mix ranges from the serious to the playful. There’s an outpost of the medical diagnostic company CND Life Sciences, which is working on a skin test for Parkinson’s disease. Across the hall, Offbeat is working on such projects as a YouTube series called “World Record Week,” where the down-for-anything host allegedly attempts to set such “records” as patronizing 100 drive-thrus within 24 hours or wearing a jack o’lantern on his head for a day.

For tenants like Sports Card Investor, the card-trading company, the Indie concept and community are working out fine.

“We chose Indie Studios because of the unique blend of high-quality, high-design common spaces, paired with private office suites,” said Geoff Wilson, founder of Sports Card Investor. “The design of the building is perfectly on trend and the common spaces are plentiful and well-architected. Our private office suite works well for our team and gives us a great home base for our content production studio.

“The Armour-Ottley area is growing in popularity with tech and creative companies and is convenient to access from many parts of town,” Wilson added. “We liked the location, plus the feel of the area.”

The following is a list of Indie Studios tenants as of December 2021.