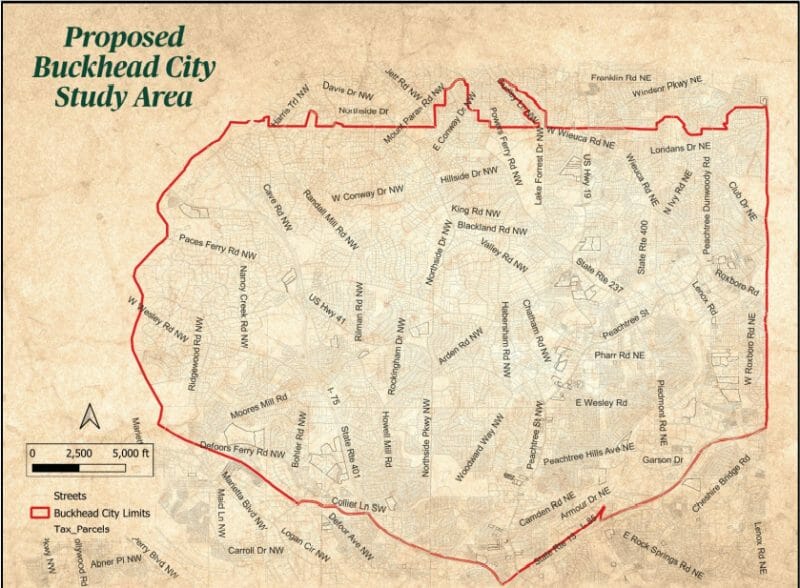 The Buckhead cityhood effort is moving ahead, with legislation enabling a referendum expected to be pre-filed Nov. 15 and backers pledging to release a proposed city budget within three months. Meanwhile, an opposition group has started a yard-sign campaign as the effort to keep Atlanta together increases.

The legislative and budget updates came at a Nov. 4 hearing of the Georgia Senate’s Committee on State and Local Government Operations, where state Sen. Brandon Beach (R-Alpharetta) said he would pre-file a bill calling for the cityhood vote in less than a year, on Nov. 8, 2022. Bill White, chairman and CEO of the pro-cityhood Buckhead City Committee (BCC), promised a draft budget within 90 days that he said would answer such major criticisms and unknowns as the effects on bond ratings and Atlanta Public Schools (APS).

The anti-cityhood Committee for a United Atlanta (CUA) and other opponents were represented at the hearing as well, and several days later launched a giveaway of yard signs in two styles, one reading “No Buckhead City” and the other saying, “Don’t Fight, Unite.” The BCC already issued yard signs months ago.

The Senate committee hearing, held during a General Assembly special session for the purpose of redistricting, essentially allowed both sides to try out their campaign speeches while providing little new information. Crime remained the big strength of the cityhood pitch and racial division a big weakness. The intensely partisan nature of the cityhood proposal, which is backed by Republicans in the legislature and in polling and similarly opposed by Democrats, was highlighted as well.

The thrust of opposition arguments was a call for more scrutiny of policy details, while supporters’ thrust was that problems would solve themselves or to wait for more information like the draft budget.

Edward Lindsey, co-chair of the CUA and a former Buckhead-area state representative, urged the committee to “drill down, because we’re not simply talking about creating a new city. We’re talking about destroying, or rather tearing apart, an existing city. That’s the difference between knowing how to scramble an egg and how to unscramble an egg — it’s very complicated.”

Beach was dismissive of concerns, saying he had heard similar arguments about the incorporation of the North Fulton cities of Johns Creek, Milton and Sandy Springs. “And I remember at the time Fulton County saying, ‘This will lead to doom and gloom. It’ll put Fulton County out of business,'” Beach said. “Guess what? [The] Fulton County budget has increased and they’re doing just fine. It was not the doom and gloom that they predicted.”

Lindsey, who was a Sandy Springs cityhood supporter in the legislature, has said the situation of Buckhead seceding from Atlanta is completely different, as the City cannot shrink its government in a similar way.

The hearing touched on some of the practical challenges the cityhood legislation has with getting through the General Assembly due some peculiar aspects. Unlike other cityhood efforts, it lacks any support — and is in fact opposed by — the local legislative delegation. And a basic feasibility study required for the legislation to proceed was conducted by a Valdosta State University center that is not on the regular list for such work. Those that are reportedly declined for reasons that are largely unexplained — the University of Georgia attributed its rejection to workload — and which cityhood backers have suggested was the result of political conspiracy.

The political divide was evident on the Senate committee itself. Supportive commentary came from Republican members Clint Dixon of Gwinnett County, Randy Robertson of Cataula, and committee chair Lee Anderson of Grovetown, all of whom are among the sponsors of cityhood legislation, with the rest also not representing Buckhead. Critical commentary came from Democratic members Michelle Au of Johns Creek and Emanuel Jones of Decatur.

A larger context of Republican power games emerged the following week, as Dixon used the special session to introduce surprise bills seeking to alter Gwinnett’s county commission and school board to undermine Democratic gains and raising criticisms of its effects on newly elected Black leaders and majority-minority districts. Anderson is a backer of those bills as well.

In the cityhood hearing, White and other backers put new emphasis on a line of argument that Buckhead secession would not only leave Atlanta unharmed, but actually improve it by reducing its expenses and freeing police officers to patrol a smaller area.

But that argument came with significant contradictions. White mocked both Atlanta mayoral contenders as fundamentally incompetent on public safety management, saying “no one that I speak to in Buckhead wants ‘Moore’ of the same, nor do we want the ‘Dickens’ scared out of us.”

White also claimed that the City of Atlanta must not be seriously concerned about impacts of Buckhead leaving because no official has contacted him directly; but he also repeated his previously disproven claims that the City is funding the opposition with tax dollars.

Then there’s the fact that only Buckhead residents would get a vote on cityhood despite the supposed mutual benefits. “The cityhood proponents have asked for the opportunity to cast a vote, but the Buckhead cityhood proposal is an attempt to cricumvent the local election process they already have access to,” said Tifton Mayor Julie Smith, speaking as a board officer of the Georgia Municipal Association. She said Buckhead could be a precedent to “elevate any local spat” to a state controversy and leave legislators “playing referee on local arguments that are well outside of your own districts.”

Crime is the source of cityhood’s political momentum and got a bright spotlight at the hearing. The BCC had a video that began with a recording of a victim shouting for help and then reeled off news reports about terrible crimes in the neighborhood over the past 18 months, such as the shooting death of 7-year-old Kennedy Maxie as she rode in a car past the Phipps Plaza mall. Testimony was given by Eliana Kovitch, who along with partner Jason Eades was the victim of a street attack for which they are seeking hate crime charges.

But the context of such crimes was in political dispute, with no independent criminologist in sight. Midtown Alliance President and CEO Kevin Green, speaking against cityhood, noted correctly that Buckhead’s Zone 2 had lower rates of crime than other areas of the city. Robertson, a former law enforcement officer, challenged that, saying some crime rates looked lower because residential burglary plummeted during the pandemic; but Atlanta Police Department stats show that in 2020, violent crime increased citywide but at lower rates in Buckhead than elsewhere, and that the main driver of higher crime rates was thefts from vehicles.

Anderson and White also claimed that Atlanta “defunded” the police, which is untrue. The City last year increased funding for the police department. There was a City Council legislative proposal to withhold some funding pending discussion of policing reforms in the wake of the Black Lives Matter movement, but that legislation failed.

The spectacle of a wealthy, majority-white neighborhood leaving a Black-run, diverse city is a political landmine that cityhood backers are plainly eager to avoid. Green said cityhood would create a national story about “economic and racial segregation.”

Jones asked about the demographics of the proposed Buckhead City, with White responding it would be about 18% African American and the rest “everything else.” Jones had to press White — asking three times — before the BCC leader would provide an estimate of the white population percentage: around 68%.

Speakers on the opposition side repeated claims that cityhood would damage Atlanta’s revenues, ruin municipal bond ratings statewide, cause hire fees for Buckhead residents, and result in general economic chaos. The inability of APS to operate schools outside of Atlanta was another major talking point.

“It would be an unmitigated disaster for the City of Atlanta to have its top line revenues cut by this $252 million,” said Peter Aman, a former City chief operating officer and a Buckhead resident. He predicted Atlanta would have to cut services like fire stations and 911, while Buckhead residents would have to pay much higher water fees, among other effects.

White said the forthcoming draft budget would address such financial concerns and suggested that various companies are eager to do business in Buckhead if it becomes its own city. He acknowledged that the APS issue “would be very disruptive,” but said it is not “metaphysically possible” that the school district would give up Buckhead tax revenue and thus would find a way to continue serving the area.

Some opposition arguments cut both ways. Jones spoke of the cityhood concept as “robbing” Atlanta of tax dollars and noted that the feasibility study predicts much higher revenues than expenditures. He said that under Georgia laws about balancing budgets, that could mean the new city would have to offer more services or roll back taxes, a comment that left White, sitting in the audience at that time, smiling and nodding.