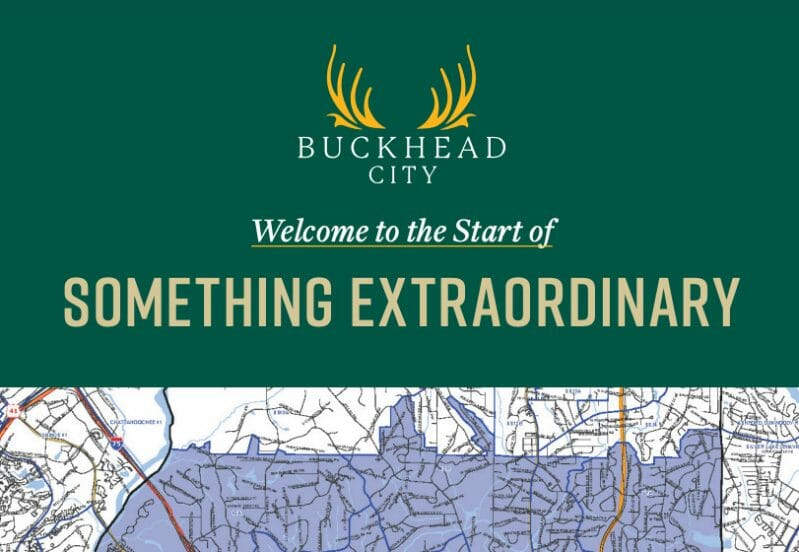 The group calling for Buckhead cityhood is pumping up its promotions with a mailing to thousands of voters touting its claimed benefits while taking swipes at the City of Atlanta and anti-cityhood advocates.

Among the mailer’s claims is that anti-cityhood advocates are “taxpayer-funded lobbyists,” which apparently is based on a confused and incorrect interpretation of how several local groups operate and which one leading opponent calls a “falsehood.”

Titled “Welcome to the Start of Something Extraordinary,” the four-page folded mailer went to “several thousand” Buckhead voters last week, according to a spokesperson for the pro-cityhood Buckhead City Committee. To see a PDF version provided by BCC, click here.

The mailer repeats the BCC’s claims that Buckhead cityhood would not financially harm Atlanta and would improve local policing. The policing section takes a shot at Atlanta Police Department morale issues, saying, “In addition to simply increasing the size of its police force, Buckhead City would view its officers as keepers of community order, not potentially malicious predators.”

Opposition groups previously issued a study claiming that Buckhead cityhood would cause budget holes for the City of Atlanta and Atlanta Public Schools, among other potential problems.

With the nationwide crime surge being the main political motivation for the cityhood movement, the mailer highlights the problem in a chart and illustration. The chart claims that certain crime categories are rising faster in Buckhead than in Atlanta overall. The illustration shows apparently real crime-related news headlines on fake newspaper clippings.

Another illustration shows the legal steps required for cityhood, which next involves General Assembly debate on legislation that, if successful, would allow a Buckhead-only secession vote on the November 2022 ballot.

The mailer includes a lengthy introduction from Bill White, the BCC’s chairman and CEO. He writes that he is optimistic about the effort in the wake of a legally required study that found cityhood to be financially feasible in terms of basic revenue and expenditure estimates. He calls on residents to join the campaign with donations and yard signs.

The introduction also claims that BCC was forced into cityhood advocacy by the City of Atlanta’s inattention and has been victimized by its “attacks … on the character and intentions of our group.”

White alludes to the BCC’s early position that, besides Buckhead cityhood, it was also considering annexation into other nearby city or simply gaining some kind of favorable political statement from Atlanta Mayor Keisha Lance Bottoms. “Our committee initially took a ‘wait and see’ approach, hopeful of a friendly and accommodating response from the City of Atlanta to address the dramatic increases in violent crime,” White wrote. “Instead, we were met with hostile resistance and baseless accusations.”

Among that resistance, he claims, was that “the City of Atlanta dispatched its taxpayer-funded lobbyists to the state capitol to thwart our efforts… You read that correctly. The City of Atlanta is using your tax dollars in an attempt to deprive Buckhead residents of the right to vote on their future.”

Asked for the identity of those lobbyists and what specific “attacks” were referred to, Janna Dawson, a public relations spokesperson for the BCC, did not answer directly, instead providing a few observations about the opposition groups. Those observations mistake one of the groups — and its funding — for another, among other fact issues. None of the information demonstrates that the City is funding lobbyists or providing City tax money to the opposition.

One of the observations is that three groups have been “very public” about opposition. One is the recently formed anti-cityhood group Committee for a United Atlanta. The others are long-established: the Buckhead Coalition, an invitation-only, membership-based nonprofit of civic and business leaders; and the Buckhead Community Improvement District, a self-taxing group of commercial property owners in the central business district who fund projects for public safety, transportation and beautification. The groups have some interconnection: Jim Durrett leads both the CID and the Coalition, which also share some staff members but remain separate groups; and CUA co-chair Linda Klein is a Coalition member.

Among the leaders of those groups, only one is a paid lobbyist: Edward Lindsey, the other CUA co-chair. He already worked as a lobbyist, at the well-known global firm Dentons, prior to CUA’s formation. Lobbyists are required to register with the state; those records show Lindsey has the CUA among his clients, but not the City of Atlanta.

As for taxpayer funding of criticism, that claim is based on misunderstanding the CID’s self-imposed tax and confusion of that group with the Coalition, which funded the recent anti-cityhood study. The BCC spokesperson incorrectly said the Coalition collects taxes and wrongly characterized the CID’s self-imposed tax as “City of Atlanta funding.” The CID’s tax is an extra collection, conducted by the Fulton County Assessor’s Office, that applies only to commercial properties within the CID’s business-area district. Most of Buckhead is not within the CID and no resident pays the CID tax. So even if the CID were funding anti-cityhood efforts, the claim that the money comes from individual voters’ “taxpayer dollars” would not be true.

Durrett, the leader of the CID and the Coalition, blasted the “taxpayer-funded” criticism made by White. “He is wrong. Period. No matter how he puts it,” Durrett said. “It is a falsehood. CID has nothing to do with this. Period.”