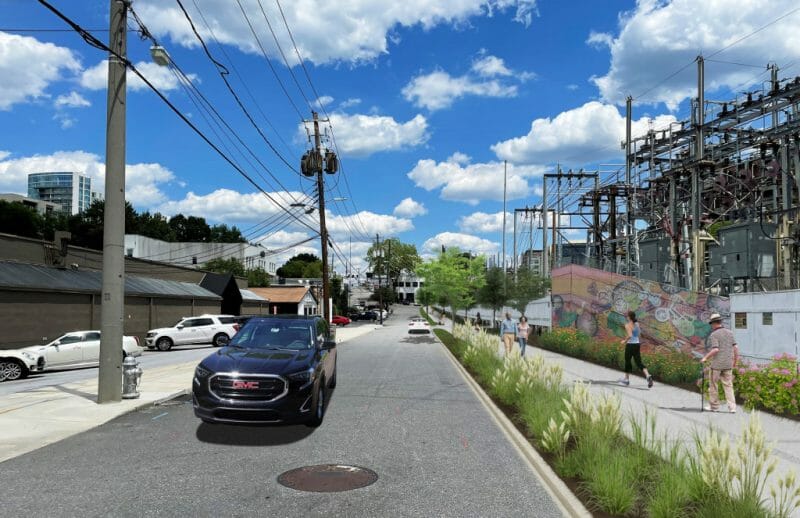 A troublesome segment of the Atlanta BeltLine Northwest Trail’s route through Buckhead is closer to a solution as planners backed off a controversial alternative that would have run through a residential neighborhood.

At an Aug. 30 community meeting, Atlanta BeltLine Inc. (ABI) revealed it is going back to an earlier concept of running the multiuse trail along the Bennett Street commercial corridor and across Peachtree Road – preferably beneath a replacement bridge rebuilt in partnership with the Georgia Department of Transportation (GDOT).

At this very early stage, a Peachtree crossing at street level is still a possibility, as is what ABI engineer Shaun Green called the discovery of a “fatal flaw” that could send planners back to the drawing board.

But for now, ABI is eager to dig into what it calls “Corridor 6,” which was previously rejected because railroad company CSX, whose tracks run beneath the Peachtree bridge, would not allow the use of its right of way. Green said the concept now is for GDOT to replace the aging bridge with a longer version that would allow room for the trail.

And voicing support was Stacey Key, a member of the State Transportation Board, which oversees GDOT. “Know that GDOT is in full support of the BeltLine and what you’re doing,” Key said, saying the agency is working “behind the scenes” to aid the project. “I think it’s great for the community and great for the economic development of the city of Atlanta,” she said. “So I’m all in. Know that.”

The BeltLine is the 22-mile loop of trails, transit and green space being constructed around the city by Atlanta Beltline Inc. with a completion deadline of 2030. The Northwest Trail segment would run roughly 4 miles between the Huff Road/Westside Park area and the Northeast Trail, another segment on the drawing boards that would connect in Peachtree Hills.

ABI last year nailed down a general preferred route for the Northwest Trail. But the Peachtree Road crossing became a sticking point. With the CSX issue, planners looked at another alternative along Peachtree Creek that raised community concerns about impacts on homes and the E. Rivers Elementary School. In January, ABI proposed yet another alternative routed down the residential Peachtree Memorial Drive and got similar concerns as feedback.

The newly “prioritized” Bennett Street route has some other challenges. A Georgia Power electrical substation sits right on that street, so ABI is in discussions with that company.

The street is also home to restaurants, nightclubs, an art museum and various other businesses. Kelvin Collins, ABI’s vice president of economic development, said the organization commissioned consultants to study business impacts and get input from owners. The methods included “town halls,” interviews and surveys. Collins said some business owners were not aware of the BeltLine plan. He said the response was “general support and positive feedback from both businesses and property owners,” but also concerns about safety, parking and construction disruptions. He said ABI will continue business engagement through the design process.

Green emphasized the concept is still very preliminary – “fat lines on paper” – and need much more work and discussion. A tentative outline of the timing would involve more community engagement next year.

As for the Northeast Trail, Green said ABI hopes to start construction in summer of 2024, but there is not a finished design yet, either. ABI’s Nathan Soldat said a Northeast Trail community meeting is likely coming in late September.

As complicated as trail discussions have been, the transit element – still presumed to be light rail – is even more so. That element, planned in partnership with MARTA, has lagged behind and now has an overall completion goal of 2050.

Green noted that, while ABI has found ways to “floss” the trail through complex streetscapes, “there is no way to floss transit through anything.” Transit lines need wide and flat corridors, he said. So in many areas – including Buckhead – the transit would have to run on an entirely separate corridor from the trail.

ABI currently has a request for qualifications open for consultants who would plan the transit element in this and other areas, which runs through Sept. 12. Green said the study’s scope would include CSX and Norfolk Southern Corporation rail lines and other “potential corridors.” The study also will consider “potential spur trail connections” to the main BeltLine trail, he said.

For more details, including the meeting presentation, see ABI’s website.