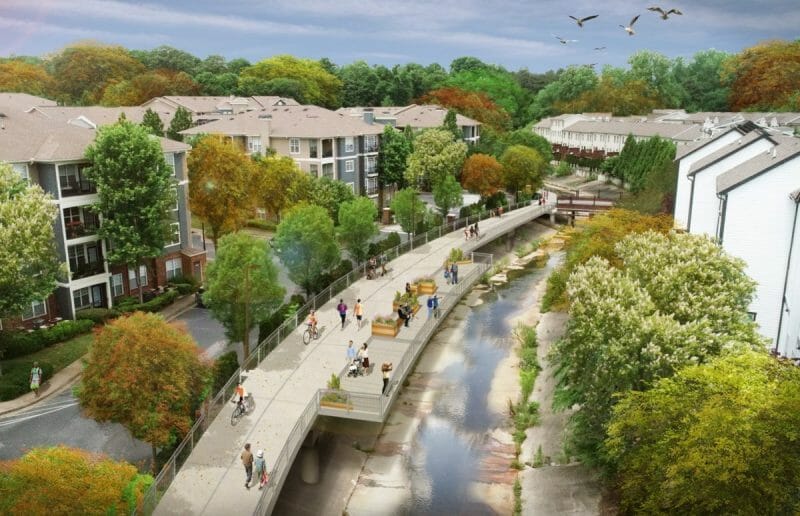 Part of the Atlanta BeltLine’s Northwest Trail now has a tentative route through Buckhead, while a controversial and complicated part at Peachtree Road will undergo months of further study.

The partial route selection, announced in a May 12 virtual community meeting by Atlanta BeltLine Inc. (ABI), means that survey and preliminary design and engineering work will immediately begin on some sub-segments of the trail. Construction would be years away, though ABI has a self-set deadline of 2030.

ABI engineer Shaun Green also said it is possible that, after further study, some segments of the trail may not be built – at least, not as part of the BeltLine. Other parties, such as the City or the PATH Foundation – ABI’s Northwest Trail partner – might fill in such gaps if they happen, he suggested.

The BeltLine is the 22-mile loop of trails, transit and green space being constructed around the city by Atlanta Beltline Inc. The Northwest Trail segment would run roughly 4.3 miles between the Huff Road/Westside Park area and the Northeast Trail, another segment on the drawing boards that would connect in Peachtree Hills. An existing, isolated portion of the BeltLine called the Northside Trail already exists around Atlanta Memorial Park, so Northwest Trail planning involves plugging new trails into the west and east sides of that.

ABI and the PATH Foundation have spent a year studying the feasibility of several alternative routes: four on the west side of Atlanta Memorial Park, and three to the east.

Planners have settled on a west-side route known as Corridor 2. It connects Huff Road and Ardmore Park/Tanyard Creek Park via Blandtown and Loring Heights/Berkeley Park. It would run past the Hemphill Waterworks and cross I-75 with an underpass bridge. A bridge-like segment along a channelized portion of Tanyard Creek is also a possibility.

The east-side route is still undecided. It’s a complicated tangle where planners are still unsure how to cross Peachtree. And local residents are giving heavy resistance to concerns about property and security impacts, as the Atlanta Journal-Constitution reported. ABI says two to three months of further study is needed, with another community meeting coming in August.

However, all proposed east-side routes dovetail to the same area along Peachtree Creek to Kinsey Court in Peachtree Hills. ABI says that sub-segment is certain enough to begin surveying and preliminary design and engineering as well.

For planning and construction purposes, the Northwest Trail route is divided into five segments. Segments 1 and 2 are the east-side trail and Segments 3, 4 and 5 are the west-side trail. Three of those segments will go into the immediate preliminary design work:

ABI has said the Northwest Trail is the most complicated part of the trail to plan because of the density of existing development and infrastructure that includes highways and railroad lines. “The Northwest corridor is really our final frontier,” said Kim Wilson, ABI’s vice president of design and construction, in the meeting.

As part of its partial route selection, ABI produced a 102-page feasibility report on how the options were vetted. That included many criteria, from funding flexibility and cost to safety and community impact.

Public feedback was another factor, and ABI got a lot of it, especially regarding the contentious east-side trail. Clyde Higgs, ABI’s president and CEO, made an unusual appearance at the start of the meeting to assure the audience its concerns were being heard. He said ABI was “encouraged” by the large amount of feedback, “even those of you who have written to us through their attorneys.”

A question-and-answer session in the meeting included several comments further highlighting concerns that the trail would make homes more accessible to criminals or lower property values. ABI officials variously questioned some of those premises and said there are design mitigations, but it’s too early to go into such details.

Planners understand that “we are changing the status quo,” said ABI engineer Shaun Green. “We are changing the existing condition. That’s our purpose, really. I’m sorry you’re feeling as impacted as you are.” He said more details would come through the process, which will include more public and stakeholder meetings.

As for construction timing, Wilson said it typically takes a year to finish design and 18 months of construction per mile of trail. But she also noted that the Northwest Trail is especially complicated. She said building some of its segments could take two to three years. But it is impossible to know any timeline for sure at this early stage.

Even less certain is the light-rail portion of the BeltLine, which has not been built anywhere yet and faces even more complex challenges in the Northwest quadrant. ABI has said it is committed to transit and hopes to build it in partnership with MARTA by 2050. The Northwest route mostly would not match the trail and instead would have to go along existing railroad corridors, said Green.

Meanwhile, Buckhead’s portion of the Northeast Trail is also in a planning stage and also facing complicated streets and infrastructure. That trail will connect the Lindbergh Center MARTA Station to Piedmont Park. A segment is under construction between the park and Plasters Avenue where a preliminary, unpaved trail runs.

For more details, including the meeting video and presentation, see ABI’s website.