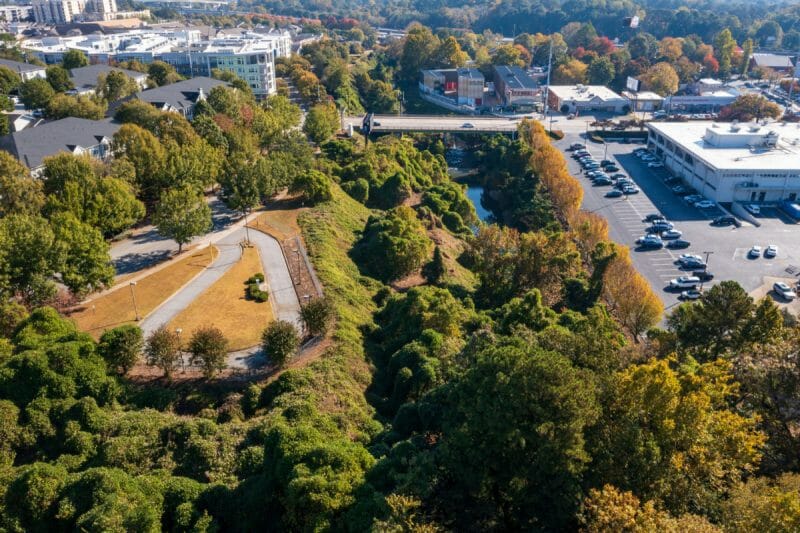 Atlanta Beltline Inc. (ABI) says it will seek high-density, mixed-use plans for affordable housing and commercial space on its property at 579 Garson Drive in Buckhead.

ABI planners said at an Oct. 24 virtual meeting that they expect to issue a request for proposals from developers in December and announce a finalist sometime in the third quarter of 2023.

Details will be up to developers, but planners said they believe the site could support 150 or more multifamily housing units in a mixed-income project and a couple of ground-floor commercial spaces. That’s all on a roughly 3-acre site that has only about 0.75 acres of buildable land.

Ben King of Noell Consulting Group, which ABI hired to conduct a market study, said that developers may “have to sharpen their pencils a little bit to meet the goals here just because of how the site is laid out.”

The site consists of two irregular parcels in the Lindbergh/Morosgo neighborhood that former were an ATM drive-thru, just west of the Piedmont Road intersection and along the proposed route of the Atlanta BeltLine’s Northeast Trail. The site overlooks Peachtree Creek just east of Passion City Church on Garson and to the north of the Rollins/Orkin building on Piedmont.

Chelsea Arkin, ABI’s senior manager of housing policy and development, said the goals include dense, mixed-income housing with a “significant” affordable component. “Affordable” was not defined, though the discussion emphasized the need for lower-income affordability. Below-market commercial rent is a goal as well. ABI expects long-term affordability, she said, though such mechanisms as a ground lease or other “creative” approaches. Nonprofit developers will be encouraged to apply.

King said that among the site’s development assets are the “water orientation” of the creek view and plentiful housing nearby that can support the commercial component.

Challenges, he said, include traffic congestion that can make walkability tough, the narrow dimensions of the site, competition for “certain land uses,” and some restrictions on what the Lindbergh market can support.

The calculus could change, King noted, if a developer acquired any adjacent parcels to make a bigger development.

On the housing component, King reported that there is unmet demand for roughly 225 rental apartment units over the next five years. For-sale townhomes could also work, he said, but that would significantly reduce the number of units. Condos would not work, he said.

King noted the big picture of unmet demand for lower-income housing across the city. He said the Lindbergh area added 235 such units in 2013 through 2019, the latest data available. That compares to over 680 lost in the BeltLine’s Eastside Trail area in the same period, according to his presentation. He indicated the Garson site could be a way of making up for some of that.

“This area is well-positioned to continue to absorb households in some other regions that are maybe not meeting [affordability] goals as much,” he said.

Some questions from meeting attendees focused on implied negative impacts of affordable housing. King and Arkin said it is needed and is the goal of the project.

“Big picture, more units mitigates displacement, and this area has been adding low-income households over the last three to nine years,” said King. “So I’m not terribly concerned about the impact of affordability on this site.”

On the commercial front, King said there are a variety of opportunities. He said the space could support a couple of restaurants, a daycare center, or “micro-retail” space where smaller businesses can use a smaller space – around 150 to 250 square feet – at rents around $350 to $600 a month.

For the full meeting presentation, see the ABI website.