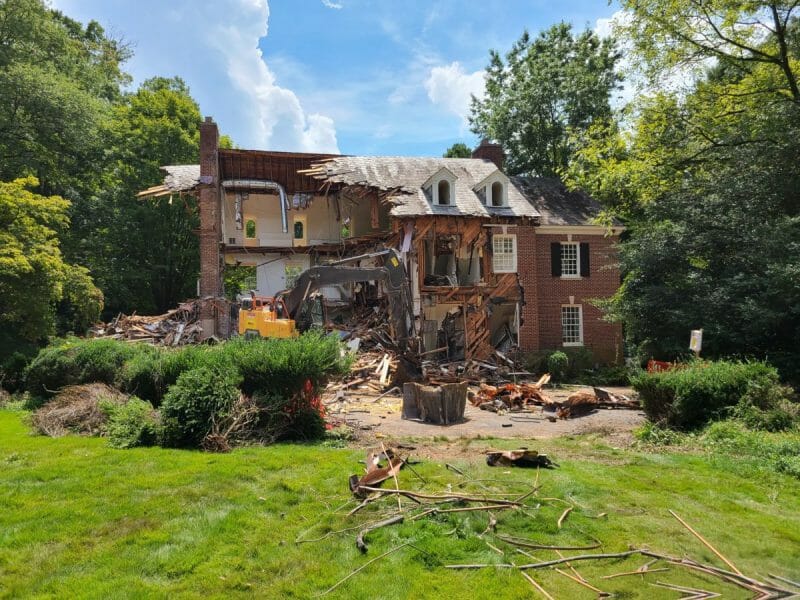 Buckhead’s historic Whispering Pines mansion, the subject of recent preservation talks with a developer, has been half-demolished in a surprise move following an abrupt sale of the property.

“I am just sick,” said City Councilmember Mary Norwood of Buckhead’s District 8, who had been involved in the preservation talks.

Dating to 1928, the mansion at 660 West Paces Ferry Road was among two-dozen estates that created the West Paces Ferry-Northside neighborhood. Its demolition began Aug. 23 but was halted by a stop-work order issued by City inspectors. Half of the facade was already gone, with rooms open to the air, ducts and timbers dangling, and the remains of a slate roof slumping.

“It’s terrible,” said Norwood. “We are losing one of the first houses ever [in that neighborhood]….” We just have not done that ever on West Paces Ferry, but we are now.”

A neighboring house at 670 West Paces Ferry, which also was historic and an element of the redevelopment plan, was already demolished by the crew in recent days, leaving a blank area of earth. That house dated to the 1950s.

The larger West Paces Ferry corridor began development around 1910. Other historic houses have been lost over the years, including at what is now the Georgia Governor’s Mansion in Tuxedo Park, and the recent demolition of such newer structures as a 1940s mansion at 274 West Paces Ferry.

The Macallan Group was the developer who acquired both properties around two years ago as part of a 11-acre assemblage with the goal of creating a new residential subdivision. Various neighborhood groups, community leaders and preservationists negotiated with Macallan on reducing the density of the project and finding a way to save Whispering Pines.

Apparently unbeknownst to those advocates, Macallan in May applied for a demolition permit for Whispering Pines. City records show the permit was issued.

When Buckhead.com visited the site Aug. 23, two City officials were leaving. The demo crew said they were inspectors who had just issued a stop-work order, without explaining why. Norwood had visited the site along with them, the crew said. The Department of City Planning later confirmed the stop-work order and indicated it was related to the unannounced ownership change. A complaint record shows the concern was that the demolition permit had been issued “without pre-inspection for demolition approval” and without approval from the Atlanta Urban Design Commission.

The demo crew said that Macallan still owns the property. But property records show 660 and 670 West Paces Ferry sold Aug. 8 for around $5.7 million total to a newly formed, Athens-based limited liability company called Westlake WPF Holding. But City records do not show the LLC or anyone else filing permits or plans for 660 West Paces Ferry.

Macallan’s sales announcement, sent via email Aug. 22, is supported by commercial real estate sites that report the 660 and 670 properties were sold Aug. 8 for roughly $5.7 million in total.

“I am writing to let you know that The Macallan Group sold the 11 acres that we acquired at West Paces and Northside Drive and we will no longer be involved with this property going forward,” wrote Macallan co-founder and managing partner Mike Minutelli, which was sent via email Aug. 22. He did not name the buyer or their plan for the site.

“The Macallan Group believes that the sale of the property will provide a fresh look at different development options for this site, and they look forward to seeing how the land will ultimately be developed in the future,” he wrote.

The nonprofit Atlanta Preservation Center (APC) was the lead in providing historic expertise in the negotiations to save Whispering Pines. In a written statement, APC Executive Director David Yoakley Mitchell expressed gratitude for the process and praised the work of Norwood, Neighborhood Planning Unit A, the West Paces Neighborhood Association and Macallan.

“While we sought to see an alternative outcome to this process, we know that we dedicated every resource and recommendation to this effort,” Mitchell wrote. “… Our hope is that the loss of this home will encourage all of Atltana’s communities to reevaluate historic preservation and embrace its opportunities.”

Mitchell told Buckhead.com that it would be “challenging” to salvage any artifacts from the now half-demolished structure and that the goal was preserving the building. He said the demolition “serves as a metaphor for what we need to be proactive about, which is growing the role of historic preservation.”

The house at 670 West Paces Ferry, known as the Nunnally House or Harrison House, also was historic, dating back 70 years, though that made it a relative newcomer to the neighborhood. The Nunnally House was rarely mentioned in news reports about the Macallan negotiations, as journalists did not independently examine the plan and advocates quietly accepted its demolition as a sacrificial lamb to save Whispering Pines. (A different house on Blackland Road is also known as the Nunnally House.)

“When given the complexity of the situation, we had to focus on what was the most [historically] contributing structure of the two to the West Paces Ferry corridor,” Mitchell told Buckhead.com. “It doesn’t mean one’s lesser or greater. It just means this felt like the path we felt the most strength in pursuing.”

Now both houses are on their way to being erased from Atlanta’s history forever.

Update: This story has been updated with stop-work order information from the Department of City Planning and information about other historic house demolitions.