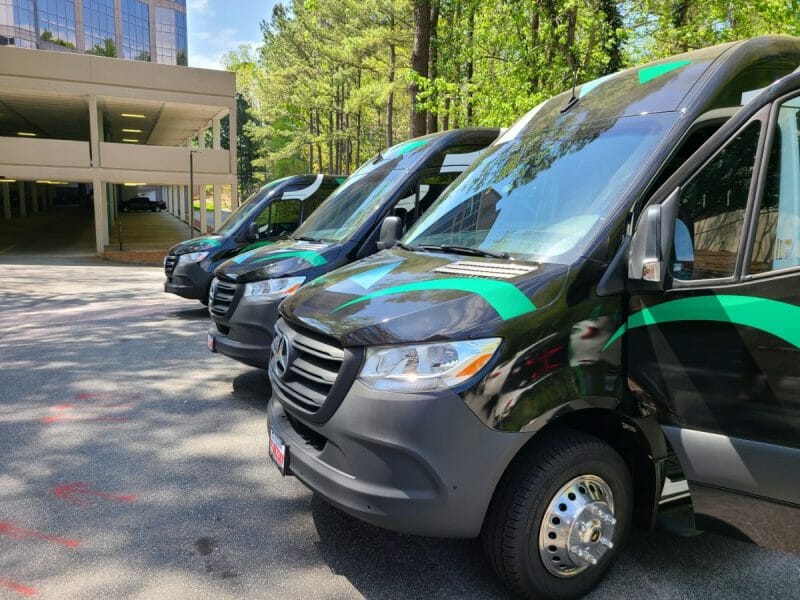 On a recent weekday afternoon, two people took a smooth, relaxing drive down Piedmont and Lenox roads to Lenox Square without once honking a horn or sweating over traffic.

No, this is not April Fools’ or the Onion. It’s a preview of a ride anyone soon can take on the new Buc van, the Uber-style, on-demand shuttle service scheduled to launch in central Buckhead April 19.

Buckhead.com rode along on an April 12 test drive from the Piedmont Center parking lot the Buc and its operators — the international tech company Via Transportation and the local nonprofit Livable Buckhead — are using as its base. Livable Buckhead Executive Director Denise Starling and this reporter were the new Buc’s first-ever passengers.

The service uses four large Mercedes-Benz vehicles that are closer to small buses. They have eight bucket seats, and one van is equipped for people who use wheelchairs. (The vehicles are gasoline-powered, not electric as Starling would prefer, but Livable Buckhead is using a carbon-offset program to try to make up for the emissions.)

The service works like the carpool feature of commercial rideshare services, but it’s significantly cheaper: $3 a ride, and free to and from the Buckhead or Lenox MARTA Stations. If you book as a group for a trip that costs the fee, up to five of your additional passengers will be charged a discount rate of $1.50 each.

For starters, the Buc will have a limited territory roughly including Buckhead Village, Lenox and the Piedmont corridor between Pharr and Roswell roads. And the hours are limited for now, too: weekdays in three discrete time ranges of morning, midday and evening that vary by day.

Part of the reason for those limits is the Buc’s origins in 2003 as a fixed-route commuter shuttle whose two loops went to only five office buildings. Then and now, a major chunk of funding comes from the Buckhead Community Improvement District, whose own territory is restricted to the same central business area. (Unlike the original, the new Buc will not run to Lenox Park at this point, though Starling says discussions are underway about possibly expansion there.)

That old-fashioned Buc is scheduled to end April 18. While the new version will serve office commuters, it’s also open to anyone and will go just about anyplace. Thus, the quick trip to Lenox when a reporter mused, “Let’s go to the mall.”

The ride was a first for everyone. Via Field Manager Burt Lancaster — yes, his name comes from the movie star — has been testing the service and training the pool of 14 drivers as part of a two-week prep time. For this run, he was training new driver Candra Smith, a Newnan resident who is picking up this work as an independent contractor.

The service is very Uber-esque. Starling ordered up the destination with a smartphone app that closely resembles familiar rideshare services. The app was a bit confused by her unorthodox use of placing the request while already sitting in the vehicle, but it all worked out. The app showed a map of the trip, with the Buc depicted with a truck icon more akin to a tractor-trailer. Smith used her version to accept the trip.

The app is handy way to use the service, but those without smartphones also will be able to order a ride by calling 470-560-4337. Nothing else is needed for the free MARTA station trips, but to pay for the $3 rides anywhere else, a credit or debit card is required.

Via operates similar services in a lot of places, from university campuses to such cities as Arlington, Texas and even Valdosta in southern Georgia. But, Lancaster said, Buckhead provides some unique challenges — a denser urban environment with some narrow streets, complicated traffic patterns and many low-clearance driveways. Due to the size of the vans, they can’t stop literally anywhere and so will use certain virtual stops programmed into the system that riders will be able to see on the app. Those pickup points should be within a brief walk from wherever the rider is.

Lancaster and Starling aided Smith as she navigated the confusing labyrinths of Piedmont Center and Lenox Square to get the hang of it. Also employed at an Amazon warehouse, Smith said she has worked in Buckhead before, including as an Uber driver, but on different hours. “I’m used to being here at night,” she said after getting her first trip through daytime traffic.

For riders, the large vehicle and Smith’s expertise made for a smooth, quiet ride through moderate traffic. The seats were comfortable, though they may be a bit narrow for larger people or those carrying sizable bags or packages. Vents along the ceiling give separate heat or air conditioning for each row of seats. Large windows provide good views of the neighborhood passing by with tinting to reduce any glare. The vehicles have a distinctive paintjob that makes them easy to recognize — abstract shapes of blue, white and green on a black background. For now, there’s also the new-van smell.

It remains to be seen who will be hopping aboard come April 19 as the long-delayed new Buc launches in an unpredictable COVID-19 pandemic era that has altered all notions of commuting, rush hour and shopping. “I have no idea what to project in terms of ridership because of unknowns,” said Starling.

But, she added, she’s excited by the many possibilities. Central Buckhead’s office space is still hovering at around 50 percent of back-to-the-office commuters, she said. But that also means some of those returning have broken old car-centric commuting habits, “so it’s an opportunity for us to really take advantage of that” and steer them toward MARTA and Buc transit.

Lancaster said transit equity is important to Via and suggested another potential ridership market: people who use wheelchairs, and especially those who, like his own mother, have less than ideal experiences with MARTA’s reserved-ride Mobility service.

Whatever happens down the road, the technology affords Livable Buckhead great flexibility in making changes to service hours, territory, and pricing, and even giving employers the opportunity to give discount codes to employees.

That’s a far cry from the old Buc, whose convenience was a big deal in its day, but hasn’t kept pace and had ridership dwindle to a handful.

“It was cutting-edge,” Starling says, reflecting on Buc past and present. “I’m excited about being cutting-edge again.”

As extra incentive to try out the Buc for this month’s launch, a rider’s first six trips will be free. For full details on the service, see the Buc website.