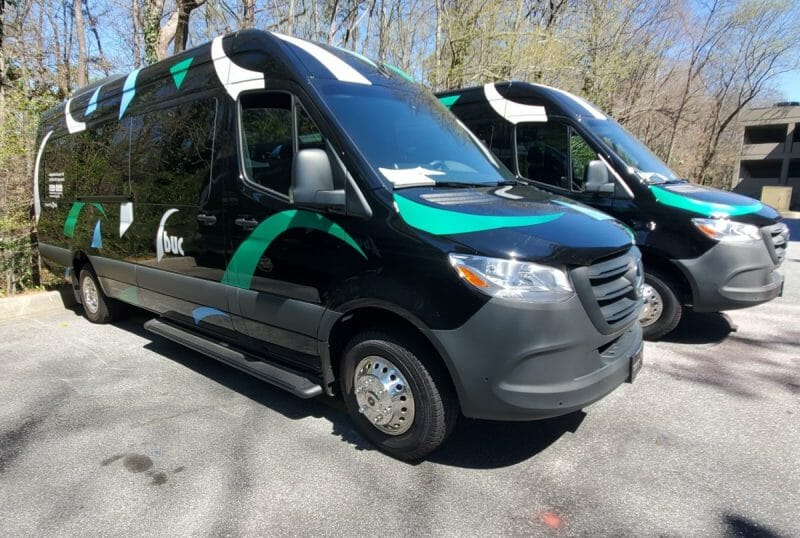 An Uber-style on-demand shuttle service in central Buckhead is scheduled to make its long-awaited — and long-delayed — debut April 19.

The app-based “Buc” shuttle will replace an existing, fixed-route version that runs two business-district loops. While the existing service is focused on commuters, the new on-demand service will be open to anyone and go virtually anywhere within the Buckhead Village and Lenox areas. The idea is to cut down on private vehicle trips and boost alternative commuting.

And the price is hard to beat: free trips to and from the Buckhead and Lenox MARTA Stations, and $3 anywhere else. The service will run on weekdays from morning to evening.

Operated by New York-based Via Technology, the new Buc is funded by the Buckhead Community Improvement District and managed by the alternative commuting and environmental nonprofit Livable Buckhead.

Those groups launched the original Buc in 2003. “So it’s fun to have it be the center of attention again with the cool new technology,” said Starling. “I’m really hopeful that it does catch on with people, particularly residents. … With the previous Buc, only a few buildings could even take advantage of it. So now it’s much more expanded [so that] pretty much everyone can.”

The service will use Mercedes-Benz Sprinter vans, the kind familiar from Amazon deliveries. The transit element means that, unlike Uber or Lyft taxi-style services, riders may share the vehicle with other passengers headed to other destinations. It also means that sizable groups can travel together.

Starling said the app will have virtual Buc stops. She said “every property pretty much has a stop where you can call it and have it come pick you up, just like Uber.”

The Buc would have been a pioneering service at that time. But in the time gap, MARTA has explored similar on-demand micro-transit. On March 1, it launched a similar program called MARTA Reach in parts of Forest Park and Southwest and Southeast Atlanta. Developed in conjunction with a Georgia Tech team, that service is intended as a six-month pilot program.

The Buc is different, using existing technology that’s already in the market, as Via operates in various locations around the nation and the world. And the Buc is not a pilot program; it’s a service with multi-year contract provisions. “We’re not intending to just pilot it and scratch it by any stretch,” said Starling.

Livable Buckhead has kept MARTA informed about the new Buc and offered to share information, Starling said. MARTA has not discussed launching a similar service in Buckhead, she said.

The Buc is intended to generate some of its own funding through marketing within the app, such as ads on the map or discount offers for groups to visit a business.

The old Buc shuttle is scheduled to cease operation April 18 and Livable Buckhead is working to inform its riders about the change.

The actual coding of the app is still being worked on, and the exact boundaries of the service zone have yet to be determined. The app is expected to be available for download about a week before the launch.

In the meantime, a close-up look at the new Buc vans will be available at Livable Buckhead’s March 27 “Party on the PATH” fundraiser. And you can sign up for Buc updates on the Livable Buckhead website.