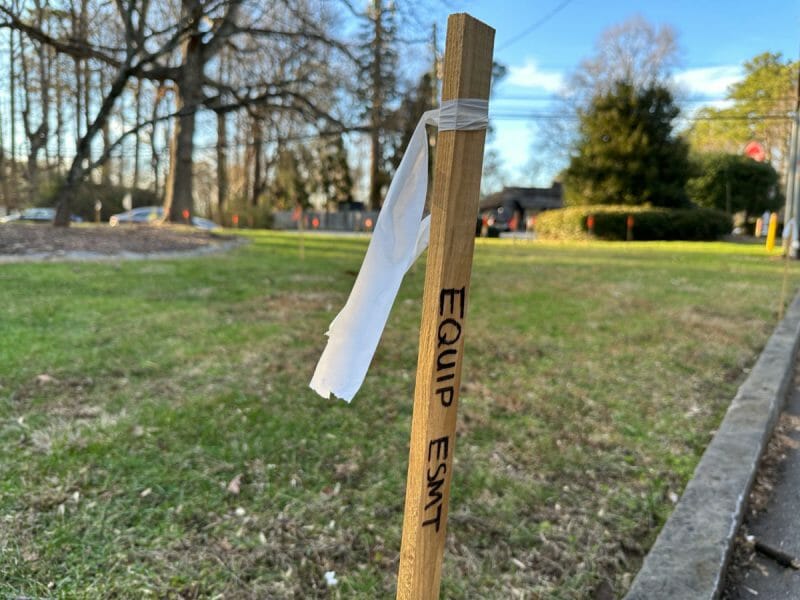 Georgia Power has plans to bury electric lines in several Buckhead neighborhoods starting this year as part of a multibillion-dollar plan to reduce blackouts. First, they need to secure the necessary easement by winning over property owners in the path of the project.

Buckhead’s impressive urban forest is a huge civic asset, but also means that storms – like the remnant of Hurricane Irma in 2017 – often topple trees into power lines. Burying – or “undergrounding” – the lines is a way to avoid that problem.

Undergrounding is sometimes done for aesthetic reasons as well. But the Buckhead plan will leave existing poles standing to carry lines from the street to houses and businesses, and for use by telecommunications companies (AT&T, Comcast). According to one source, additional poles will actually be added to deal with the new web of connections. In rare cases where neither Georgia Power nor the telecommunications companies are using a power pole, it will be removed.

In addition, the underground system requires a series of transformers housed in familiar green metal boxes that will be installed in front yards and along sidewalks, so many residents will be hearing from Georgia Power contractors about purchasing easements for those devices.

The local work will cover the Paces Ferry, West Paces Ferry, and Powers Ferry roads corridors in such western neighborhoods as Chastain Park, Paces and Tuxedo Park, as well as part of North Buckhead between Ivy and Wieuca roads. Georgia Power aims to begin construction this spring and summer, with the work lasting approximately 12 months.

The work is just one part of Georgia Power’s “Grid Investment Plan,” a major, multiyear project of systemwide improvements. The goals are improving the reliability of Georgia’s electric grid and lessening the impact of any failures. The company is about two years in the first phase, for which it is spending $1.3 billion.

Improvements are not performed randomly. “We are making strategic grid investments, selecting project locations based on historical service and performance data to ensure that we are putting our resources in the right places to improve reliability,” said Bertot.

The grid has two basic components: transmission, where power is sent over long distances to localities, and distribution, which is sending the electricity into your home or business.

On the transmission side, the plan includes replacing wires and/or structures, and substation improvements as significant as full reconstruction.

On the distribution side, undergrounding is just one of several improvement tactics. Others include: adding “automated line devices” that automatically isolate outages to smaller parts of the grid; adding connections, which can provide a backup power source; relocating lines in hard-to-reach areas so that repairs are easier; and line strengthening, which can refer to a variety of upgrades in localized spots that make damage or other failures less likely.

Buckhead is also getting automated line devices and strengthened poles, according to Georgia Power.

Many other neighborhoods, such as Druid Hills, are getting similar improvements, including undergrounding.

Undergrounding requires various metal boxes to be set into the ground to provide power switching and delivery. In particular, a box called a “single phase transformer” has to be placed “every few homes” for delivery, according to Georgia Power’s website. Those are green boxes on a concrete pad that are roughly 26 inches high, 34 inches long and 31 inches wide. They are built on a concrete pad and need about 10 feet of clearance to be maintained on all sides.

There is not sufficient space for the boxes to be installed in the public right of way, which in residential areas typically means a narrow strip of lawn along the road. Acquisition subcontractors are now contacting residents seeking easements to install the devices, offering around $1,000 as compensation. If the initial offer is  rejected, the offer escalates quickly and significant amounts have been reported.

The easements are all voluntary, according to Georgia Power, though it is less clear what happens if property owners refuse, especially on an entire street. The company’s answer is that in such cases it would “explore other project alternatives.”

The company says it aims for “minimal disruption” in installing such devices. But the work might require trimming trees, removing landscaping and digging up sidewalks and road trenching. Landscaping and sidewalks would be replaced by the company.

The undergrounding affects only the main distribution line, not the lines going to individual properties, so poles will remain for that purpose. Georgia Power also says it notifies telecommunications companies that may also use the poles about the work, but can’t control whether they also choose to bury lines. Any pole used purely for carrying a Georgia Power distribution line would be removed after the undergrounding.

Georgia Power provides extensive information about the Grid Improvement Plan – including frequently asked questions and construction maps – on its website.