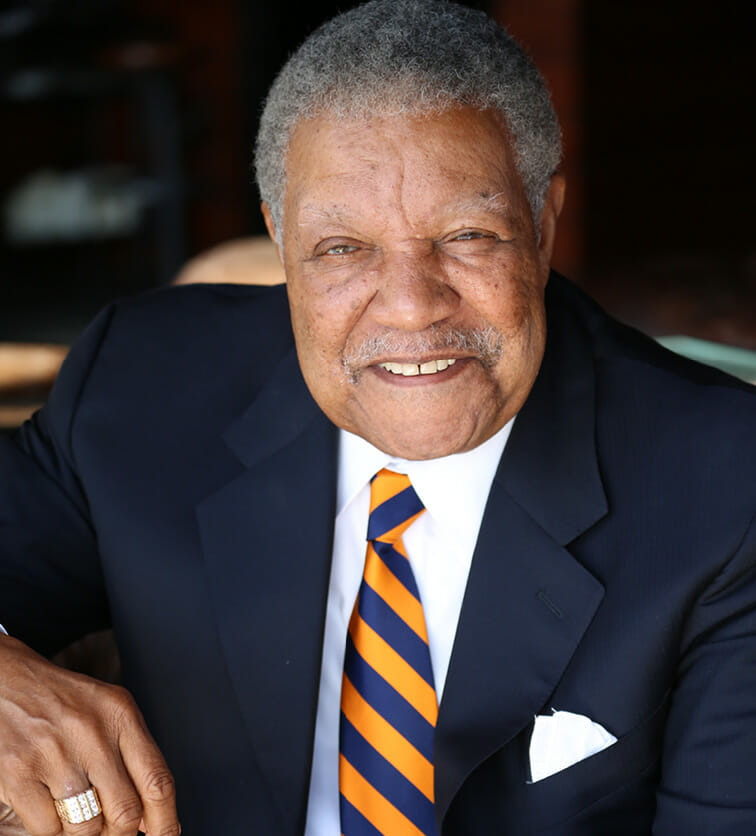 Robb Pitts, chairman of the Fulton County Board of Commissioners, is known across the metro area for decades of public service going back to the Atlanta City Council in the 1970s.

Not as well known is that he’s called Buckhead home for roughly 30 years and remains one of its biggest fans.

“I can’t see myself living anyplace but Buckhead,” Pitts said in a recent interview. “I’ve seen it change through the years. It’s more crowded than it used to be. But it’s still a great place to live.”

The chairman and his wife, Fran, now live in the Gallery condo tower on Peachtree Road in Garden Hills. In the recent chat, Pitts recounted much of his journey to here from the tiny town of Haddock where he was born. From playing in a rock band, to college Civil Rights activism, to the Atlanta Olympics, it’s been an eventful trip.

Spanish and the arts

Growing up Black in a small town outside Macon in the Jim Crow era was a tough start. Pitts says his mother headed north for work and sent money back for years before bringing him to live with her in Dayton, Ohio. He says he became the first member of his family on his mother’s side to graduate high school.

He got an academic scholarship to Ohio University, where a proclivity for languages led him to major in Spanish and Latin American studies. That would become the basis for his first career path – academia – but it wasn’t so obvious at the time in the restless 1960s.

Pitts says he considered the military but was unable to pass advancement tests for the Air Force and Army ROTC that he believes were tossed aside by leaders who didn’t want him involved. “I was gonna drop out,” he recalls, and took to hitchhiking across the U.S. and Canada. On the advice of a professor, he perfected his Spanish by heading to the Mexican city of San Miguel de Allende, then a bohemian hot spot, and attending school there for a time.

He also showed some talent for music, playing trumpet and alto sax in a rock band called the Egyptians that toured Ohio colleges. “I wasn’t really that good, but I was in the band,” he says. The band leader, however, really had something going. His name was Clarence Satchell, and he went on to found the hit funk band the Ohio Players. “To be clear, I couldn’t have played in the Ohio Players,” Pitts adds.

He finished his schooling at Kent State University, where around 1965 he got his first job teaching Spanish. As one of two Black faculty members, he became an adviser to nascent Black student groups and an attempt to launch one of the first Black studies programs. He also got involved with the New Left group Students for a Democratic Society in a time of activism that included student demonstrations.

“I was young – foolish at the time, to be honest with you – but those were good times,” he said.

But the Kent State program wasn’t working out and Pitts got word from down South of an opening at Clark College (now Clark Atlanta University). He said the president there “offered me a job over the phone – $10,000 – and I took it.” And so in 1969, Pitts finally arrived in Atlanta.

His artistic interests continued along with the teaching. He got involved in the collegiate theater group the Morehouse Spelman Players. Breaking briefly into song, Pitts recalled performing in such plays as “Everyman” and “The Threepenny Opera” with a student by the name of Samuel L. Jackson, who went on to become a Hollywood movie icon. Also in some of those performances was LaTanya Richardson, now a movie star in her own right and Samuel’s spouse.

After three years at Clark, Pitts shifted gears to join the business world. He went to work for the Atlanta Chamber of Commerce on international programs, playing off his academic expertise. He had a hand in the Organization of American States holding its 1974 conference in Atlanta – the first time it was held outside of Washington, D.C. He calls it one of the events that “in my humble opinion, really put Atlanta on the face of the international map.”

He would go on to work for Central Atlanta Progress, a Downtown community development corporation, and then run his own construction and telephone companies. He eventually retired via the insurance business and has also worked as a consultant.

Pitts’ first foray into Atlanta’s business scene in the early 1970s coincided with dabbling in its political world. He was a campaign volunteer for Leroy Johnson, Georgia’s first Black state senator since Reconstruction, and got to know Mayor Sam Massell, another powerful Buckhead resident. He met many business leaders, too. “I was just fascinated by what these guys had been able to accomplish from a political point of view and a business point of view,” he recalls.

Hanging out with such power-brokers was heady stuff, especially in the freewheeling ’70s. One of the gathering spots was the Playboy Club on Luckie Street, a spinoff of the famous sex magazine where women dressed as “Bunnies” served male patrons. “It was really smoke-filled rooms with cigars and whiskey and other stuff,” Pitts says.

The connections also gave him a ringside seat to a unique moment in Atlanta sports and cultural history: the 1970 boxing match that was legend Muhammad Ali’s comeback after much of the nation blackballed him for being a conscientious objector to Vietnam War service. Johnson spearheaded the effort to stage the match in Atlanta and drew a national spotlight to the city. “Every notable Black celebrity in the world came for that fight,” Pitts recalled.

For the first time in his life, Pitts began thinking that maybe this politics thing was for him, too. “I said, ‘I can do this as well as these guys can,’” he says. “…. I wasn’t a Grady baby. I didn’t know Martin Luther King. I didn’t go to an HBCU. But I decided to run.”

In 1973, he took a shot against an incumbent for an at-large City Council seat, campaigning on his field of expertise as “Atlanta as an international city, which was really unusual for the day.” He had a narrow loss, but “creamed” the incumbent in a 1977 rematch.

That launched a two-decade run in the seat, followed by service as the council’s president in 1997 to 2001.

In that time, he saw Atlanta become the kind of international city he campaigned on – especially with the 1996 Summer Olympics. “I was on the team, but I wasn’t a starter,” he says of his role in the bidding. However, he ended up with one key role when Mayor Andrew Young was unavailable, so he joined Billy Payne, the mastermind of Atlanta’s pitch, in formally delivering the city’s bid to the International Olympic Committee in Switzerland.

In 2001, Pitts aimed higher and took a run at the Mayor’s Office. But Shirley Franklin narrowly won a majority of the general election votes, avoiding a runoff with the second-place Pitts. “I’m very proud of this,” says Pitts. “Shirley and I were friends before the election, we were friends during the election, and we remain friends today. Politics doesn’t have to be dirty and nasty…”

As a political comeback, Pitts won a Buckhead-area Fulton County Commission seat in 2003 and held it until 2014. In 2017, he won the chairman position, overseeing the policymaking for Georgia’s largest county.

What brought Pitts to Buckhead in the first place? It was a long journey – with an ugly beginning.

When he first moved to town from Ohio, Pitts said, he signed a lease at a Midtown apartment complex, only to find the manager crying when he arrived. “She said, ‘We can’t rent to you.. She explained the owners did not want to integrate the building.’” And they weren’t the only ones. Pitts said three other complexes also rejected him out of racism, including Buckhead’s historic Darlington Apartments. Represented by his friend Sen. Johnson, who was also an attorney, Pitts sued the original Midtown complex and won.

“I didn’t get anything out of it,” he says. “They just had to say they wouldn’t discriminate anymore.”

After meeting Fran, the couple moved to the then-new Colony Square in Midtown. There they had their daughter Jordan and eventually needed more room. Finally came the move to Buckhead, as they bought a house at 221 Lake Forrest Lane, a stone’s throw from Chastain Park. It would be their home for over a quarter-century.

“I think that is the best street in the city of Atlanta,” says Pitts, fondly recalling the “super-friendly” neighbors – if also lamenting how over the years, the ranch houses were replaced with “McMansions.” But not the Pitts’ house.

“That house is not the biggest house in the world, but it looks like a house that was designed by Frank Lloyd Wright,” he said, recalling its glass-and-brick design. “And I always loved that place.” He spent many a late night on the rear porch, listening to Motown and enjoying a cigar.

About two-and-a-half-years ago, he says, Fran made the call that it was time to downsize to the condo tower across town. (Full disclosure: Buckhead.com publisher Ben Hirsh was their real estate agent.) He says the couple now loves “the convenience of highrise living at this point, and being in Buckhead, safe and secure.”

Plus he still gets to enjoy his favorite Buckhead hangouts. Top of the list is Hal’s, the classic steakhouse, where Pitts counts owner Hal Nowack as “one of my best friends” for over 30 years. Back in the City Council days, Pitts says, they partnered on elaborate holiday dinners for women and children who were homeless.

Pitts is also a fan of the Buckhead Life Restaurant Group and its owners, the Karatassos family. He enjoys a few of their restaurants, “and more importantly, the cigar bar at Chops.” If you’ve been wondering, his favorite smoke is the Cuban-made Ramon Allones.

Downsizing and enjoying some old-favorite spots is not, however, retiring. In fact, Pitts just beat a couple of primary election challengers and is now poised to win another four-year term as chairman in November unopposed.

It’s just another chapter in what he calls “a very exciting life, full of energy. I still love what I do as a public service.”