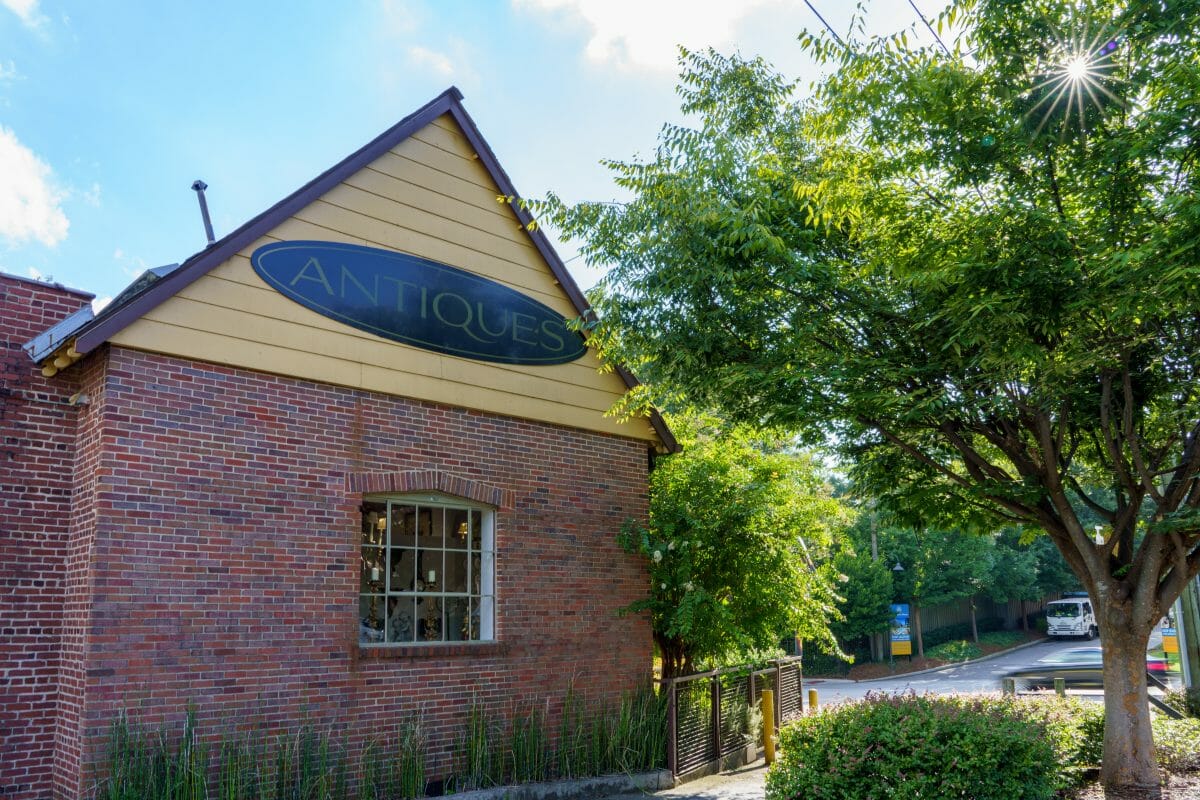 Plans for a luxurious, 17-story condo tower just north of the Peachtree Battle Shopping Center appear to be moving full steam ahead with an agreement to partly preserve a historic brick building currently home to an antiques market.

Dubbed the Peachtree Battle Condominiums, the 160-unit tower would stand at the southeast corner of Peachtree Road and Terrace Drive in Peachtree Hills. While redeveloping three existing lots, the project would preserve much of the 90-year-old building that currently houses Peachtree Battle Antiques and Interiors and was once home to the iconic bookstore Oxford Too, thanks to an agreement with the Peachtree Hills Civic Association.

On Aug. 5, developer Kolter Urban gained a zoning variance for the tower’s 212-and-a-half-foot height, which was the last City permission needed before construction. The construction timeline is unclear, as Kolter did not respond to a comment request.

The tower would occupy three lots numbered 2395, 2425 and 2451 Peachtree. Besides the antique store, they currently also contain the Covenant Collective, a shared office building run by the Buckhead-based Christ Covenant church, and the site of an already-demolished Burger King.

According to plans filed with the City, the 160 condo units would consist of 11 one-bedroom units and 149 two-bedrooms. The residential space would total 319,481 square feet.

The building would have a four-level parking deck with 326 spaces accessed from a drive on Terrace. Also in the mix would be 50 bicycle parking spaces.

The condo project replaces a failed, five-year old plan by another developer, Branch Properties, to build an apartment tower. The original plan also was 17 stories, but shorter and denser at about 192 feet with 262 units and 485 parking spaces. In community presentations, Kolter said the greater height of the condo tower was needed for higher ceilings that it considers an important selling point.

Branch’s original plan involved demolishing the historic building at 2395 Peachtree known locally as the “book bindery.” A house-like structure with a long, boxy extension on the back, the building dates to 1929, when it was the National Library Bindery Company, a kind of book factory. It was designed by A. Ten Eyck Brown, the architect behind the Fulton County Courthouse and the Sweet Auburn Curb Market, among many other structures. The Oxford Too rare and used bookstore occupied the building in the 1990s, and more recently it housed a Smith & Hawken garden store before becoming the antique market.

The demolition threat earned the book bindery a place on the 2018 “Places in Peril” list from the Georgia Trust for Historic Preservation. Under pressure from Peachtree Hills resident Laura Dobson, a preservation advocate, as well as the civic association and Neighborhood Planning Unit B, Branch agreed to a deal to save roughly the front third of the building while demolishing part of the original structure and a more recent addition. The written agreement applies to any successor developer, whether that it is Kolter or someone else if the condo tower falls through.

The agreement, whose language was tightened by the civic association following the debut of Kolter’s plan, says the surviving section of the book bindery will be preserved and maintained as a stand-alone building. The facade won’t be changed and the building will get a historic restoration if it is damaged for any reason. The construction will be monitored through quarterly reports to the Atlanta Preservation Center, a nonprofit based in Grant Park.

Dobson and David Yoakley Mitchell, the APC’s executive director, say the agreement is an important citywide precedent of a developer agreeing to permanently preserve a historic structure and integrating it into the plan.

“The preservation of this particular building is highly significant because it really starts to set a new trend in how preservation is expanding outside of its tradition … By keeping this building and having new construction around it, you really tell the story of that part of Atlanta,” said Mitchell. “Let’s give the developers a round of applause. They didn’t have to do it.”

Mitchell said it’s “unfortunate” an agreement to save the entire building could not be reached. But, he said, it’s still a big win for a community whose members may recall its several different uses over the decades.  “That building’s contribution is far more than simply an accolade of the preservation of identity and architecture and all those things,” he said. “It’s really a metaphor for the courage of a comm to keep its past a component of its future.”

The antiques market, unfortunately, won’t be a part of that future. It has said it will have to find a new home as the partial demolition will not leave enough room for the roughly 40 antiques vendors who operate there.

Kolter Urban is part of the Florida-based Kolter Group, which is known for luxury condo projects. For a look at its work, neighbors need look no further than just up the street at 2520 Peachtree, where Kolter’s Graydon Buckhead condo tower is rising for an expected opening in early 2022. The Graydon is Kolter’s first project in the Atlanta market.