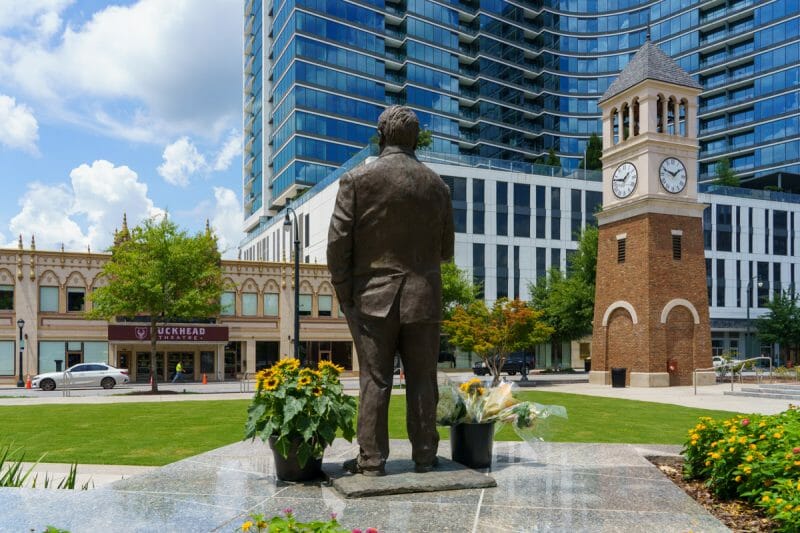 Charlie Loudermilk, an iconic business and civic leader in Buckhead and the rest of Atlanta for nearly 70 years, died Aug. 2 at age 95.

Locally, he paid for the 2008 rehabilitation of the historic Buckhead Theatre on Roswell Road and is lionized across the street in Charlie Loudermilk Park, a virtual shrine that includes a replica of the clock tower at his college and a statue of the man himself giving the thumbs-up sign.

“I’ve been blessed with a loving family, lifelong friends, robust health, and a successful company founded a long time ago on a shoestring,” he wrote in a 2011 memoir. “Most amazing, I’ve been blessed with the means and desire to change things for the better while I still can. I’ve had a near perfect life, though, like most mortals, I’m an imperfect person.”

Mayor Andre Dickens said in a written statement that he was “deeply saddened” by Loudermilk’s death.

“Throughout his life, he remained devoted to ensuring Atlanta is a prosperous, unified and forward-thinking community,” said Dickens. “From his philanthropic efforts to his work integrating marginalized Atlanta businesses into the larger business community, his accomplishments were many and his actions matched his mantra of ‘work hard, dream big.’ My thoughts are with his family and loved ones.”

The entire Atlanta City Council issued a joint statement saying Loudermilk “loved the city of Atlanta and remained committed to building civic pride and uniting the community throughout his life. We are greatly saddened to hear of his passing and our thoughts are with his family. He always looked to the future of our city and his life was a shining example of philanthropy and hard work. He will forever be remembered as a pillar of the community.”

His death was announced in an Atlanta Journal-Constitution obituary.

Charles Loudermilk Sr. grew up at 11 White St. in Northwest Atlanta’s Howell Mill Road corridor and spent much of his childhood playing – and selling goods on the street –- in nearby Buckhead, where he was nicknamed “Jeep” after a “Popeye” cartoon character.

His mother Addie ran restaurants, a business he joined her in for about 15 years. He praised her as the inspiration for his work ethic in his memoir, titled after her supportive advice in times of challenges: “Charlie, Just Do Better Next Time.”

In 1955, Loudermilk started Aaron’s, which grew rapidly. The business also drew his first involvement in the Civil Rights movement. In his memoir, he recalls renting furniture to Martin Luther King Jr.’s team for some of the organizing for the historic voting rights marches from Selma to Montgomery in Alabama. Feeling sympathy for the “underdogs” who paid the rental fee in small change, he wrote, he and a friend joined part of the third march.

Back in Atlanta, Loudermilk was among the conservative white business leaders who believed Black political leadership of city government was inevitable. But in his memoir, he recalls being among those who believed the first Black mayor, Maynard Jackson, had “divided the city along racial lines.” Much of Buckhead’s business community was ready to support a white candidate to replace Jackson in 1981.

But Loudermilk became a staunch supporter – and campaign co-chair – of Black candidate Andrew Young, a Civil Rights activist who won and became a transformative mayor for a decade. In return, Young named Loudermilk to the MARTA Board of Directors, which he chaired.

Aaron’s was headquartered in Buckhead Village for decades as it grew into a massive success, particularly after Loudermilk took it public in 1982. Loudermilk was high in the ranks of the city’s most influential leaders and among the likely inspirations for the main character in Tom Wolfe’s famous – or infamous – satirical Atlanta novel “A Man in Full.”

A less successful venture was the Buckhead Community Bank, a multi-branch operation Loudermilk founded in the 1990s and which failed after the 2008 recession. He and son Robin remained involved in Aaron’s until about a decade ago. The family returned to business with The Loudermilk Companies, a Buckhead-based real estate company that Robin Loudermilk, a local resident, continues to run as an influential business and civic leader in his own right.

Charlie Loudermilk was involved in many civic groups, including his longtime membership in the Buckhead Coalition, an influential nonprofit organization long headed by the late former Mayor Sam Massell.

As he acknowledged in his memoir, Loudermilk was not one to reveal his emotions and often spoke bluntly. However, he was often humble about his accomplishments and had a self-deprecating sense of humor. Once asked by this reporter what it felt like having a park dedicated to him, Loudermilk recalled with a laugh strolling through the green space only to find that some wag had slipped a condom over the raised thumb of his statue – which he thought was hilarious.

On the serious side, Loudermilk was proud of his partnership with Young and his civic work in general.

“I get a helluva lot more out of it than I put into it,” he wrote in his memoir. “I know that sounds Pollyannaish, but I just do. I like the feeling that I am contributing and impacting the lives of people.”