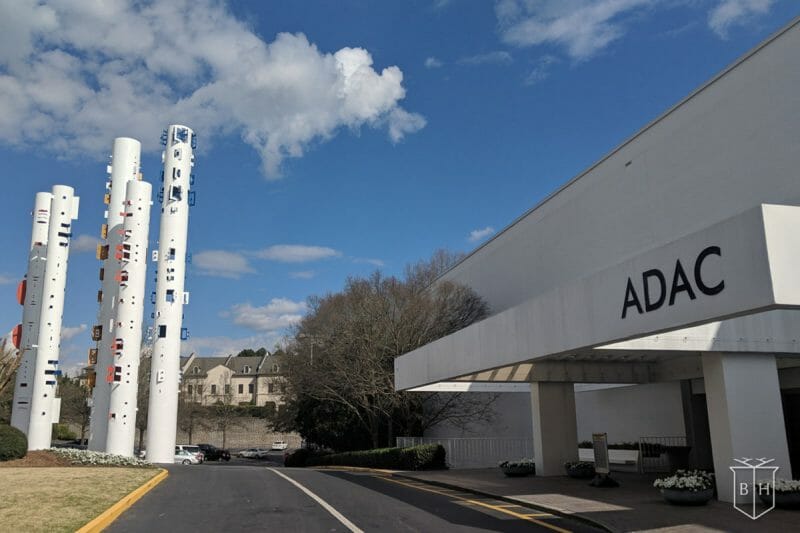 ADAC, a landmark in Buckhead’s Peachtree Hills, is marking 60 years as a center of interior design in the Southeast.

Founded in 1961 as the Atlanta Decorative Arts Center, the marketplace at 351 Peachtree Hills Ave. was the brainchild of John Portman Jr., the renowned architect and developer of such Downtown icons as Peachtree Center and ADAC’s sister market, AmericasMart. In the neighborhood, ADAC is widely known for “South Music,” a towering steel sculpture in its front yard created in 1985 by Angel Orensanz for Downtown’s Marriott Marquis hotel and moved to the site in 2007.

But what exactly goes on inside the design center? “The way I always describe ADAC is, it’s like a shopping mall for interior designers or people in the interior design trade,” says Katie Miner, the center’s general manager since 2012.

The five-story, 555,000-square-foot center contains 65 showrooms of “all kinds of products to decorate the home,” says Miner. Antiques, floor coverings, fabrics, kitchens, lighting and more are on display. ADAC serves as both landlord and marketer for the various manufacturers and makers, some of whom have on-site representatives and some that are run by the center.

ADAC West, a neighboring complex of buildings at 349 Peachtree Hills Ave., is home to the offices of 25 architects and designers.

For decades, ADAC was a private facility serving only industry professionals in the long-insular design world. But that changed nearly 10 years ago, as public knowledge of interior design grew thanks to the internet and do-it-yourself movements.

“As of 2012, we opened our doors to the public,” said Miner. “Anyone can come into ADAC and shop around, look at the fabrics, sit on the sofa, and really start to understand what is available to decorate their home.”

In fact, you can make a day of it. ADAC hosts two restaurants: the Hungry Peach Cafe inside the main facility, and the KR SteakBar, an Italian steakhouse at ADAC West.

Today, ADAC hosts many events, including two annual markets — “Discover ADAC” and “Design ADAC” — that originated in welcoming the general public to the center. It also operates the Southeast Designers and Architect of the Year Awards.

Lifting the “veil of secrecy” and welcoming the public has been a big success, said Miner. But it can also show the public how overwhelming the choices can be and how important the designer’s role is, she added. “You want a designer to walk you through that process so you don’t make a mistake,” she said.

“I’m a perfect example,” she said. “I’m around it every day… and I have an interior designer.”

Miner said that members of the public with an interest in design sometimes assume a design center is only for the luxury market.

“There’s also a common misconception that everything at ADAC is super-high-end — ‘Oh, I can’t afford it.’ That’s not true at all,” she said. While you certainly might find a $50,000 dining room table in the showrooms, she said, the norm is pricing in the range of a couple hundred dollars to the lower thousands.

Like other parts of the home design industry, ADAC saw a big boom in demand from the COVID-19 pandemic, as people staying at home started having makeover ideas. And like other parts of the industry, it is now squeezed by supply shortages partly caused by the pandemic and also by such factors as a winter storm in Texas earlier this year that shuttered foam factories. That custom sofa that might have arrived in 10 to 12 weeks could now take six months, Miner said.

ADAC is one of only about 12 or 14 design markets around the country. It’s a regional draw for designers from 10 states, Miner said. In 2018, ADAC was bought by an affiliate of Blackstone, a New York City-based asset management and investment firm whose other recent acquisitions include the billion-dollar, Buckhead-based clothing company Spanx.

ADAC has changed many times over the decades from its start as a one-story building. There were several expansions over the decades, and ADAC West was created in 1986 by the acquisition of a neighboring warehouse. Blackstone is now considering more changes that could come in the next year or so, Miner said.

“They have some ideas for some really cool renovations to the building to bring a 1961 building into today,” she said, describing a possible facade change and more architect and designer studios.

Another big change headed ADAC’s way is the Atlanta BeltLine, the ring of trails, transit and green space being constructed around the city. Buckhead’s two segments of the trail portion, still in the planning stages, are likely to meet in the area of ADAC.

“We’re very supportive of it,” Miner said, noting ADAC’s origin with Portman, another city-changing visionary. “The BeltLine is just a really cool development within the city… I’d love to see that also connect to Buckhead and be part of that.”