Buckhead Tales: Season of the Witch 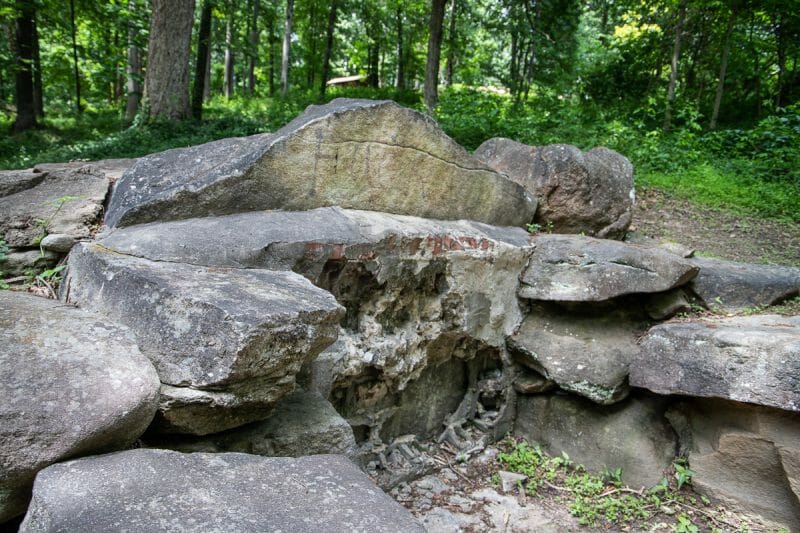 During my childhood years in Buckhead in the 1950s and 60s the crown jewel of our adventures in the natural world was Chastain Park. Swings, baseball fields, tennis courts, swimming pool, horse stables, hiking trails, a golf course, and even the noble amphitheater. Who could ask for more? It was the Central Park of North Atlanta. But there was one very special place in the park that now exists only in the memories of those who spent their childhood there.

It was known simply as the Witch’s Cave. Located in a quiet cul-de-sac, it was sheltered by ancient trees and giant boulders. Every child knew it existed and that it was a place of powerful magic. Of course it was never discussed with adults, for as everyone knows sharing such knowledge with adults is taboo.

The passage through the cave took one through a rocky tunnel. There were two openings and we would go in one way and come out the other. It was long enough so that even in the bright of day it would be totally dark in the cave. Dark and cool. We would walk in one side and by the time we were halfway through we would become gripped with fear and dash for the exit.

We had all heard the oft repeated story of the poor child who had lingered too long in the cave. Captured by the bony fingers of the witch he never emerged, gone forever into the underworld.

Some said that in their sprint through the cave they could hear him calling for his mommy. We had seen witches in Disney movies, but to us, this was real. It was never spoken about with our parents. They would not understand the magic of the cave. But children knew.

Recently, after decades of absence, I returned to Atlanta and headed straight for Chastain Park and the Witch’s Cave. I couldn’t find it. It was there, but not there. Some risk-averse city planner had obviously perceived it as a threat and buried it during the dark and bleak decade of the 1970s. Some child must have spilled the beans or else an adult had overheard a conversation between two 8-year old kids about a witch.

Whatever the reason, they buried the cave and removed the magic. Grownups tend to do such things.

Looking closely, I could tell that both ends of the tunnel that ran through the cave had been bricked up. Maybe the cave is still there, under that giant mound of Georgia soil. Maybe one need only remove a few bricks and brush aside some dirt to gain entry once gain. I knelt down beside what had once been an opening and listened for a long time to see if I could hear the muffled cry of a little boy calling for help.

Of course, I heard nothing. After all, I am now an adult and no longer hear such things.

Poets tell us we have but a few years in The Garden but are eventually expelled and banished to the world of adulthood. What we once could see and hear is no more. A world disappears as the child grows. Something vanishes and only a dim memory remains. Some say there are ways to swim against the tide of time and see that world again. A glorious and boundless land where the afternoon lasts forever. Where we go fishing with our Grandfather in the stream of eternity. I have friends who strive endlessly to find ways to return to The Garden. They fall in love, they nibble magic mushrooms, they stare at stained glass windows, they fast for days. So many ways to try and find the path back to the portal but it is all fruitless, a fool’s game.

At most, a glimpse of The Garden is the only possible option for those who no longer call it home.

The Gods in their kindness have granted me a full walk on the Long Road. My hair has turned gray as I approach three score and ten. The book of time reflects balance. Sometimes I can catch a glimpse of what once was but now is no more. On some days, walking through the hills of life, I reach a promontory and can turn, look back, and see all the way to the beginning. Past the grainy cities of lists, past the ponds of broken hearts, past dreams abandoned too soon, past all the thinking that led nowhere.

But if the sun is at just the right angle, way off in the distance, I see my mom and dad, still alive and laughing. I see a group of friends chasing fireflies in the summer dusk. Further back I see my first bicycle, gleaming red on Christmas Day. All the way back I can see the tops of the tall oak trees growing up out of Chastain Park and beyond that, The Garden.