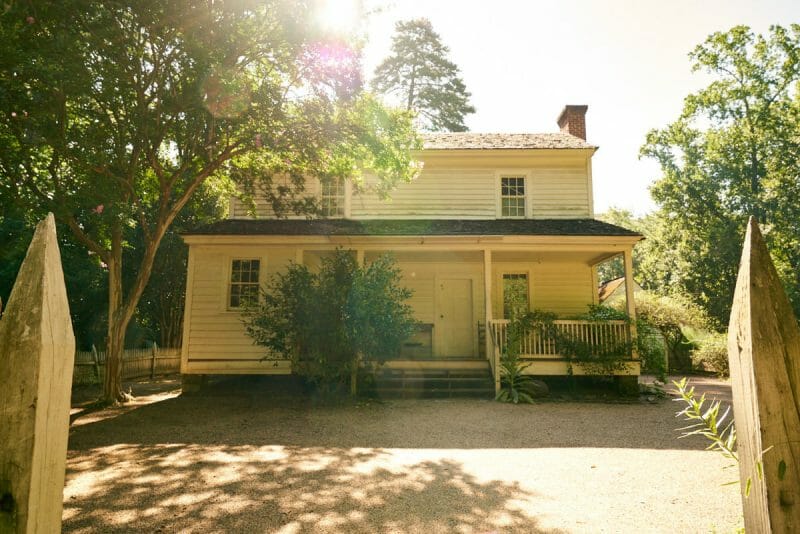 A reconstructed 1800s farm at the Buckhead-based Atlanta History Center is poised to gain official City landmark status. The designation would be unique — the first of its kind in Atlanta — in landmarking a collection of buildings that were moved to a site.

Landmark status for the Smith Farm would mean City approval is required for altering the site, but there’s no big threat since it’s at a history museum. To the City, the landmarking is part of a new wave of recognitions that expand the definition of a “historic” site or structure. To the center, it’s just good citizenship.

“It’s a way we model for other people,” said Sheffield Hale, the center’s president and CEO, in a recent interview. “If we don’t do it, why should anybody else do it? Physician, heal thyself.”

The Atlanta Urban Design Commission on Aug. 25 approved the landmark nomination for the farm, which sits on the 130 West Paces Ferry Road museum campus. The nomination is now working its way through City reviews which will culminate in a City Council vote.

At the same meeting, the UDC approved another first-of-its-kind nomination: a cast-concrete railroad bridge spanning Ormewood Avenue between the neighborhoods of Grant Park and Ormewood Park. It’s part of an intentional effort by the City’s Historic Preservation Studio to go beyond the traditional landmarking of individual buildings that are typically chosen for architectural beauty or ties to famous and wealthy families. Other recent landmark nominations include a Capitol View Masonic lodge and Black federal workers union office; the Old Fourth Ward’s Fuller-Freedom House, used by Civil Rights activists; and the Atlanta Eagle, a Midtown gay bar.

Doug Young, director of the Historic Preservation Studio, said at the UDC meeting that the Smith Farm nomination is “unusual and it’s the first of its kind.” The City supports it, he said, because the collection of relocated and partly built structures now has a 50-year history itself.

“What makes this property unique is both the history of the buildings themselves and the fact that it’s acquired its own significance since the buildings have been moved and assembled on the site, because part of the significance is as an educational function in the City of Atlanta,” Young said.

The center is no stranger to landmarking. The 1928 Swan House mansion and its grounds on the center’s Buckhead campus was among the City’s inaugural landmarkings in 1989. The center-owned Margaret Mitchell House and neighboring Commercial Row building are also landmarked.

But those are traditional structures for landmarking. The Smith Farm is a mix of authentically historic and recently made structures, none of them original to West Paces Ferry Road. It operates as a quasi-working farm, with costumed actors teaching visitors about the lives of farmers and enslaved people in the pre-Civil War era.

The core buildings are the Tullie Smith House, an 1845 farmhouse moved there from what is now Brookhaven, and an “enslaved people’s cabin” dating to around 1850 that came from Cliftondale in South Fulton.

The landmarking would include those structures and the landscape around them, as well as a dairy, a corn crib, a barn and a smoke house. Left out are the more recent additions: a blacksmith’s shop, a chicken coop and a privy.

Hale and Jackson McQuigg, the center’s vice president of properties, said they proposed the landmarking to the City. (To read a full copy of the report proposing the landmarking and explaining the site’s history, click here.)

Besides setting a good example, they say, it was a chance for the center to compile its own history of the farm’s creation rather than the lore that had accumulated over the decades.

“It was a lot of fun to reach back in the past and see what people had done,” said McQuigg.

The farmhouse rescue took some doing from folks of that time. The house stood on North Druid Hills Road at what is now the intersection with Executive Park Drive in the Emory Healthcare-dominated neighborhood that bears that name. Its farm extended across the street to what is now a multibillion-dollar Children’s Healthcare of Atlanta hospital campus.

Back in the ’60s, a group of preservationists, mostly women, came together to save the house. McQuigg notes “they were swimming against the current” in an era when Atlanta landmarks were being demolished left and right, such as Terminal Station and the Piedmont Hotel. “It was a great preservation save,” he said.

Moving the house took a lot of money, so it was very helpful that among the group was Mills Lane Jr., the colorful president of the then-powerful Citizens and Southern National Bank. Lane was a mover and shaker who, among other notable efforts, helped lure the Braves to town by funding the former Atlanta-Fulton County Stadium. Lane also was a native of Savannah, which Hale notes was going through its pioneering historic preservation efforts at the time.

Not coincidentally, the house’s site became a C&S bank branch, occupied today by its successor company, Bank of America. McQuigg says it’s unclear whether Lane had the idea for a bank location before or after backing the house’s preservation and relocation. “I wonder which came first, the chicken or the egg?” he said.

If the farm is landmarked, that means changes to the building exterior or the landscape would need UDC approval, which could be denied. Obviously the center has no plans to bulldoze its own historic site. But what if it wants to add more historic buildings in the future or move the set-up to expand the museum? Why create hurdles on what is already a museum campus?

“A lot of people look at landmarking as a negative because they look at it as a restriction,” said Hale. “We look at it as a positive in terms of preserving this site long-term, as well as showing our … interest in the value of the site. …. We’re not worried about it from some black-helicopter [conspiracy theory] standpoint that somebody’s going to come in and regulate us.”

McQuigg noted that the UDC has given the center permission for some changes to the Swan House grounds. That included the addition of yet another relocated building: the Wood Cabin, which dates to at least 1847 and possibly much earlier. “That part of our property is not preserved under glass just as it was,” says McQuigg, and there is the opportunity to work with the UDC on reasonable changes.

McQuigg spoke favorably of the City’s efforts to broaden the array of landmarks, pointing to the railroad bridge that was nominated the same night as the farm. “That’s an example of something that was in everyone’s backyard and was overlooked,” he said. “That’s a landmark that everybody knew. But no one ever said, ‘Hey, you know, that’s really significant.’ And it is.”

Atlanta is not alone in rethinking what counts as “historic” and new ways to define and preserve it. It’s a nationwide trend among preservationists and cities. That goes for museums, too, which collect artifacts and stories.

Hale says “there are areas of history that have been overlooked in the past or underappreciated, and those are things that we are interested in, elevating those stories. … So in that sense, it’s consistent with the broadening definition of what’s an important structure to save.”

A basic representation issue for the center, Hale says, is that it frequently hears from people in neighborhoods close to the Buckhead campus, but not so much citywide. More outreach is part of a new strategic plan and already reflected in such efforts as one that solicited COVID-19 pandemic materials from the public in the midst of the historic event.

“We have a collecting plan that we’ve adopted that [says] we are going to make a concerted effort to get out into neighborhoods where we haven’t traditionally had collection,” Hale said. That could mean bringing more artifacts and materials back to the center, or assisting with localized versions. “But it’s about building relationships and letting people share their history in a way that we can capture some of it,” Hale said. “You’ve got to be proactive. You’ve got to develop relationships to get the stories.”