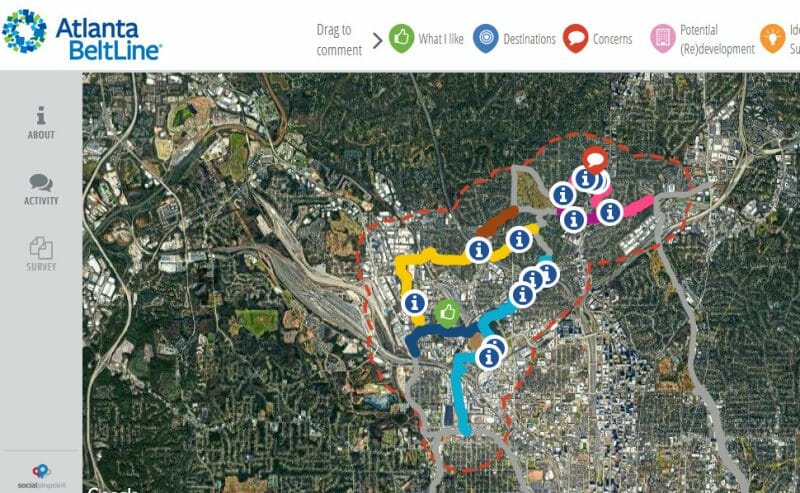 Atlanta BeltLine Inc. has launched an interactive map and a survey to take public input on possible alignments for Buckhead’s Northwest Trail in advance of a February 2022 decision.

The BeltLine is the 22-mile loop of trails, transit and green space being constructed around the city. The Northwest Trail segment would run roughly 4 miles between the area of Huff Road and Westside Park, and the Northeast Trail, another segment on the drawing boards that would connect in the area of Peachtree Hills.

At a Nov. 1 virtual meeting, planners presented an updated timeline of taking input through year’s end, including through small, neighborhood-focused meetings; completing the feasibility study in January; and announcing the preferred route, or “alignment,” in February. After that, a design phase could begin as ABI aims for completion no later than 2030.

Kim Wilson, ABI’s vice president of design and construction, said that the choices of alignment would be ranked. That way, if the top choice proved infeasible due to engineering realities, ABI could quickly move to a second choice or alter it on the fly. She also noted that the final list of possible alignments might be different from the ones currently under consideration due to further study and public input.

A recap of the feasibility study phase contained little new information beyond a few spots where talks with property owners have been productive, as at E. Rivers Elementary School, or challenging, as with a request to use CSX right of way to go under Peachtree Road.

The interactive map and survey for the online public input are available through Dec. 31 at beltline.org/nwtrailstudy. The map allows users to place comments directly on routes and locales, with the responses visible to all users. The survey asks various questions about the respondents and their preferences.

As for the transit portion of the BeltLine in that area, its future remains vague. Shaun Green, an ABI senior transportation engineer, said that the organization is joining MARTA and the City in studying grant opportunities. One thing for sure, he said, is that the transit would not run on any of the possible routes for the Northwest Trail due to right of way issues.

Another potential issue raised by a member of the public is what happens to BeltLine planning in the area if Buckhead becomes its own city in the effort that advocates seek to put on the ballot a year from now. ABI officials said they just don’t know.

“Currently… we don’t have an answer to your question,” said Beth McMillan, ABI’s vice president of community planning, engagement and arts and culture. “As the Buckhead movement progresses, we would need to get together with whoever the leadership emerges to be and have those kinds of conversations.”

Green said that because the BeltLine is part of a regional trail network, “ideally, this all goes forward anyway.” But, he added, ABI does not have an answer to the question. “We’ll find out soon enough how big of an issue that is,” he said.

For a video of the Nov. 1 meeting, see ABI’s Facebook page. For materials from the presentation, see the ABI website.