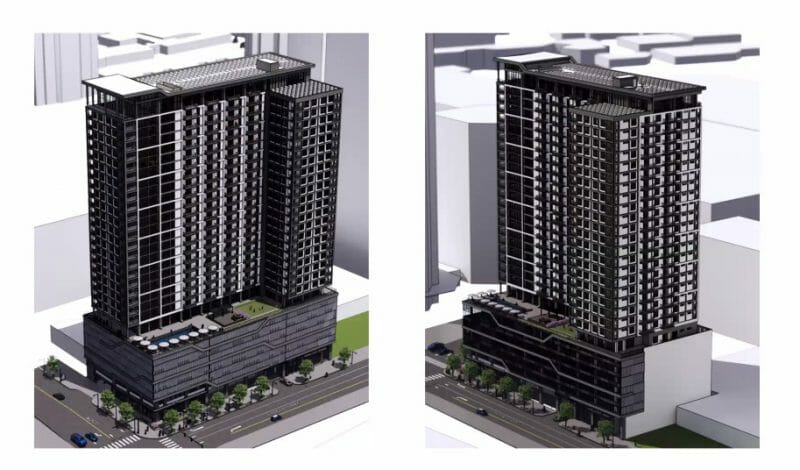 A 30-story apartment tower is proposed to replace the former Houston’s restaurant on a key corner across from Buckhead’s Lenox MARTA Station.

The 395-unit tower would squeeze on a site under an acre in size at 3321 Lenox Road at the East Paces Ferry Road intersection. The project is proposed by High Street Residential, a subsidiary of the Trammell Crow Company that is involved in such high-profile projects at Science Square at Georgia Tech.

The developers presented the project at a Nov. 2 meeting of the Development Review Committee (DRC) of Special Public Interest District 12, a zoning area aimed at design details and walkability. The DRC raised some questions about traffic flow and the lack of affordable units.

While the project would sit across East Paces Ferry from a MARTA station, it is proposed as having 458 parking spaces in a roughly six-level garage within the tower. That’s still less than the 556 spaces developers say are allowed by zoning. They also propose 50 bicycle parking spaces.

According to a City filing, the unit breakdown is 22 studios, 312 one-bedrooms, and 61 two-bedrooms. An outdoor deck on the eighth floor would include a dog walk.

The Lenox Road Houston’s, a popular outpost of a chain, operated on the site for 40 years before shuttering in 2018. The one-story restaurant building has remained vacant and would be demolished for the project. The new tower would not have a commercial component, but would have a cafe for tenants with some outdoor seating that might somehow get some “public activation” as well, the developers said.

The 315-foot-tall tower faces a site so tight that it would be built right on the lot lines on some sides. The northeast side would have a blank wall roughly 60 feet high, partly on the presumption that something eventually will be built next to it. The developers are treating the Lenox Road side as the main entrance and the East Paces Ferry side as more utilitarian, as it would include three bays for electric transformers, the exact arrangement of which are still in discussion with Georgia Power. The site also has a steep grade change on Lenox of 11 to 12 feet.

Due to the tightness, the developers believe they will need three zoning variations. Two are related to how the building overhangs or otherwise encroaches into a 10-foot-wide sidewalk zone for street furnishings. The other is about the amount of “fenestration” – windows and doorways – and how the transformer bays do or do not meet the requirement. The DRC indicated its approval of the encroachment variations but wanted to see more work on the bays and how they would look to pedestrians.

The plan has two garage driveways, one on Lenox and one on East Paces Ferry. The development team referred to the Lenox driveway as the main one, but it appears both would work the same. A separate entrance on East Paces Ferry would serve delivery and trash vehicles.

The traffic flow in the major intersection raised a concern for DRC members, with member Sally Silver suggesting the Lenox outlet be right-turn-only. A representative with Kimley-Horn, a consultant working on the project, said no traffic study has been done, but acknowledged a traffic management plan would be required. The team said they will speak with the City Department of Transportation.

Another DRC concern was affordable units in a project the developers said would have rents averaging around $2,500 a month. Silver noted that it would be great if some of the employees of the nearby Lenox Square mall could afford to live in the immediate area. Project architect Jenny Williams of Cooper Carry said the developer had some preliminary discussions about affordable units “but cannot make a commitment at this time.” At another point in the presentation, she noted a conceptual illustration showed a Porsche luxury car entering the building as a sign of the  “caliber of residents” the developers expect to attract.