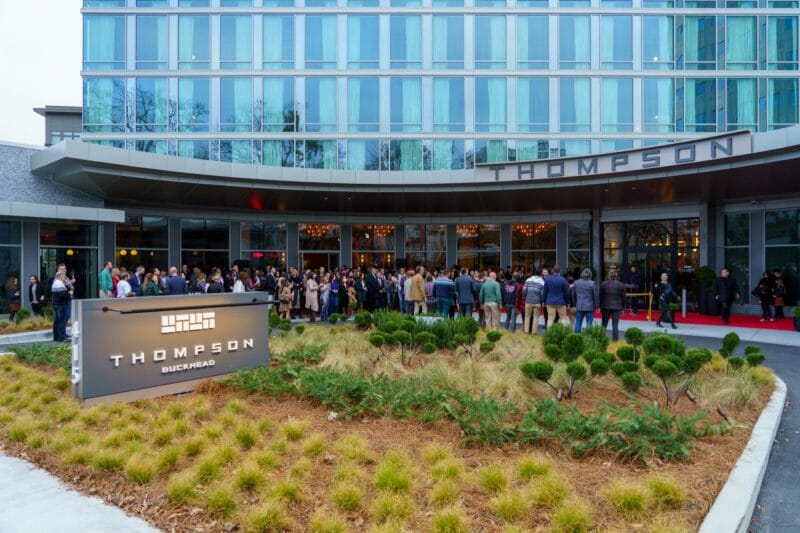 The new Thompson Buckhead Hotel officially opened on December 15, 2021 with a ribbon cutting ceremony and ‘First Pour’ cocktail party. Hotel guests will begin checking in on December 28, but a few invited guests were on hand Wednesday to explore the facility and experience the private rooftop club.

The Buckhead Village property is the first for the Thompson chain in Atlanta. Thompson Hotels are known for their luxurious design and attention to detail. Each hotel is unique, and is specifically built to fit in to the “fabric of the community” where it resides. The boutique chain was purchased by Hyatt Hotels Corporation in 2018. Development of the Buckhead project was already underway when Hyatt acquired the Thompson brand.

The 10-story hotel was designed by Rule Joy Trammell + Rubio, built by Brasfield and Gorrie, and “brought to life” by Studio 11 Design. According to the Thompson, the design, “exudes classic Southern charm and a design that perfectly melds romanticism with mid-century minimalism.”

The Thompson Buckhead features 201 guest rooms, including Junior Suites, King Suites, and Parlor Suites up to 620 square feet. If you need more room to spread out, the Thompson Suite offers 1,048 square feet of luxurious amenities.

Up On The Roof

Suites include an invitation to experience the rooftop private membership club known as Tesserae. Tesserae will be an exclusive venue for members to enjoy exclusive food and beverage options and private events in a breathtaking indoor/outdoor setting on the 10th floor. We were treated to a preview of the rooftop club during the hotel’s grand opening. It’s safe to say that everyone in attendance was thrilled by the skyline views of Buckhead and Atlanta from the private outdoor patio.

All hotel guests will have access to the rooftop pool that occupies the other half of the 10th floor. Private cabanas and skyline views will certainly make this a center of activity in the hotel.

Chef Todd Ginsberg and the Rye Restaurants team are building the “old-school Italian-American” restaurant, known as Dirty Rascal, on the hotel’s ground floor. Ginsberg is a two-time James Beard Foundation semifinalist at The General Muir. Rye Restaurants include local favorites like West Egg, Yalla, and Wood’s Chapel BBQ. Josh Hopkins will be the executive chef at Dirty Rascal.

The ribbon cutting was a festive affair. The Thompson’s halls were decked with Christmas trees and other holiday decor. The Atlanta Gay Men’s Choir surprised the guests with a spontaneous flash-mob style rendition of “All I Want for Christmas is You” in the hotel lobby, followed by a few more carols outside before the ribbon cutting ceremony.

General Manager Lukus Grace welcomed the assembled guests and gave heartfelt thanks to his partners and staff. Grace’s experience includes the Hotel Bel-Air in Los Angeles and the St Regis in Buckhead. His passion for the hospitality industry and attention to detail will serve the Thompson well.

Once the ribbon was cut, guests made their way to the 10th floor. The Buckhead skyline greets you through floor-to-ceiling windows as you step into Tesserae. As your eyes get used to the incredible view you realize that the opposite side of the club is completely open to the rooftop. Guests were drawn outside, where we were treated to incredible unobstructed views of Buckhead on one side, and Atlanta on the other.

The bartenders made a steady supply of classic and inventive cocktails, and hors d’oeuvres were plentiful. Charles Burt and his team at Tesserae definitely made an impression on the guests. It’s no wonder that they already have a waiting list to join the new private club!