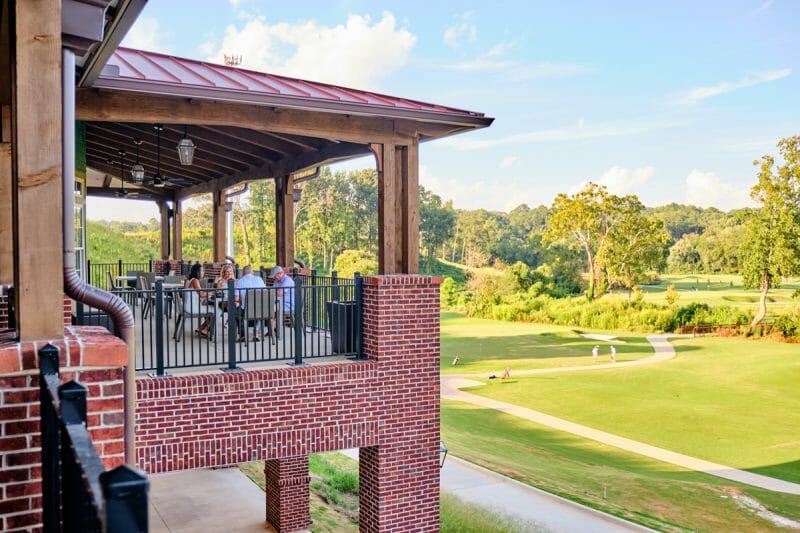 A fine mist of rain started to fall as I pulled into the parking lot off Northside Drive. It was my first time seeing the finished Murray Golf House; it does not tower or loom and instead feels rather quaint. If I didn’t know better I might have imagined the building had been there for decades. But no, that is just how delicately balanced this club house was designed to be.

Off to one side, under an awning and through wooden double doors, is Boone’s. Named for Augusta businessman, philanthropist, and golfer Boone Knox, the New American restaurant features a refreshingly modern interior amidst the traditional elements of the Murray Golf House. Metal accents, beautifully upholstered seating, and a sleek semicircular bar give the space a light and comfortable air. Glossy historical photographs of Peachtree, Atlanta’s most famous street, are printed on metal sheets and displayed throughout the dining room. Just outside along the back of the building is an open air cocktail patio and covered dining area with incredible second story views of the golf course stretching out into the distance.

Now, first understand that I am not a golfer. Sure, I’ve played a few rounds at Top Golf and goodness knows I have made a valiant effort to stay under par on putt putt courses, but I have never once played the actual sport of golf. And yet here I found myself transfixed. The natural beauty of the land is like nothing I’ve seen before. Throughout my meal on the patio I was continually distracted by swooping birds, the occasional clack and whizz of a golf ball flying through the air, and the blissfully cool breeze tussling the branches of the massive trees that dot the serene landscape. The misty rain continued for the duration of my visit and gave the scene an otherworldly feel. It was hard to remember that I was still in the heart of the city, mere minutes from the centers of Buckhead, Midtown, and the Westside.

It was on the patio that I met my lunch partners; Bobby Jones Golf Course Foundation (BJGCF) president Martin “Marty” Elgison and Austin Rocconi, Executive Chef. Together we sat and discussed the business, the building, the view, and of course the ever-present challenges faced by local businesses in the midst of a global pandemic.

“When we designed this originally, this restaurant did not exist. It was going to be just a grab and go halfway house that you typically find at any golf course,” explained Elgison. Those plans changed rather far into the development of the Murray Golf House when Brian Conley, General Manager of Bobby Jones Golf Course who had formerly been the Head Golf Professional and Director of Golf at Lake Lanier Islands Resort told them it was ‘crazy’ not to install a full restaurant.

The Murray Golf House was designed by master architect Jim Chapman and the interior design– all that sleek modern vibe with a hint of retro style– was actually thanks to a team of students from SCAD Atlanta. When the Bobby Jones team was working on hammering out the aesthetics of the new club house they approached a design class at SCAD Atlanta led by interior designer Alejandra Martinez Dunphy of A-D Design Firm. The class split into teams and each presented a design which was then voted on by Elgison, Chapman, Chairman of BJGCF Chuck Palmer, Whitney Crouse of Bobby Jones Links, and a fundraising consultant firm. The winning team’s design was implemented, and Elgison brought on Dunphy to oversee the thousands of smaller decisions for the space, covering everything from fabrics to light fixtures.

“We are not fine dining,” said Executive Chef Rocconi when asked about the menu. “We are not trying to be fine dining at all; we are just casual. I feel like we are approachable. You can come in with shorts and flip flops and a ball cap or if you want to come out for a date night, we can hit both of those.” Though the menu features high quality dishes and dinner staples such as proteins with vegetables and elevated hand-rolled, house made pasta dishes, it also features comfort foods like a cheeseburger and seafood mac ’n cheese.

While I was there I sampled the house made saffron tagliatelle with summer vegetables, basil, and Georgia olive oil. Though it was a pasta dish it was refreshing and light thanks to the crunch of fresh vegetables tossed with oil. The meal was fancy enough to order for a date night and also easy enough on the palate to appeal to all kinds of diners. In addition to the main food menu, they are currently developing a lunch menu, dessert menu, and a kids menu, though in their research they found that most kids in the area requested elevated dishes such as sushi and quinoa instead of chicken nuggets. Rocconi’s official stance is one of inclusivity. “Everybody should be able to come in here and feel comfortable.”

Indeed, the crowd at Boone’s has been mostly families from the neighborhood and, of course, golfers. “We are probably 75% neighborhood and people venturing in who have been watching us,” Rocconi explained. “The golfers have been waiting for us to open so they can bring their whole family out.” Elgison pointed out that many of their customers walk in from off the BeltLine or the adjacent Bitsy Grant Tennis Center, and noted that there are around 1000 homes within walking distance of the restaurant.

The drink menu features beer from local breweries on tap, a wine list, and tasty cocktails such as their signature cocktail: the Bobby Jones. Inside the dining room visitors might notice some small casks sitting on a buffet table near the bar. At first glance they seem decorative, but no, they are actually liquors that are being infused and aged for custom drinks like the Bobby Jones.

“It’s our signature, it actually predates the Arnold Palmer,” explained Rocconi. “Through some research, this was done back in the ‘20s and ‘30s.” The drink calls for Bobby Jones branded Clover Bourbon which is infused with peaches for five days, barrel aged for three days, and then combined with vermouth peach bitters, lemon, and a splash of tea to complete this signature cocktail. For a whiskey drink it is still light and refreshing, and the tea adds an element of reminiscence – it tastes familiar and distinctly southern. Reminds me of home.

The Right Man for the Job

Executive Chef Austin Rocconi grew up with a love for cooking originating from his Italian family heritage. From a young age he witnessed his parents and family devoting a significant amount of effort into creating huge, elaborate hand-made pasta dishes at every holiday. After going to college for hospitality and business management Rocconi went on to work in a variety of restaurants across the country, including local favorites Canoe, Kyma, Paces & Vine, BLT Steak, and Bistro Niko. He brought years of experience and wisdom gleaned from his mentors at these restaurants to help create an innovative, fresh, locally-sourced and seasonally appropriate menu at Boone’s. In addition to being an accomplished chef, he’s also a golf lover who used to play at the old Bobby Jones course weekly, which Elgison says was a factor in hiring him for the role. They play on the course together regularly.

A Work In Progress

The Murray Golf House is coming along nicely, and I got a sneak peek at some of the other spaces which are in various stages of completion. The Georgia Golf Hall of Fame will serve as the first ever brick and mortar location featuring exhibits documenting the history of great golfers in Georgia. The space, when finished, will be used for events and gatherings and is equipped with its very own catering kitchen downstairs. Down the hall is a conference room with portraits of Bobby Jones, including – believe it or not – one by Dwight D. Eisenhower. Upstairs are offices, and at the other end of the building is the pro shop where you can find all the branded merchandise and swag to complete your golfing ensemble. They are also planning to open a free-standing grab-and-go shop for sandwiches and the like as well as installing a putting green right out front.

While opening a new restaurant during a global pandemic does certainly present some complications, Elgison explains that they never seriously considered a delay to the projected opening of Boone’s. “We had a plan, we had a schedule, we had a budget,” said Elgison. “You know, we are a nonprofit. This entire facility, the golf course and everything except for the tennis center, is run by a nonprofit. So we don’t have investors we could go to and say ‘hey we need to wait 6 months, we need another couple hundred thousand dollars to tide us over.’” Indeed, they had begun hiring and instead focused their attention on how to make the business flourish despite the restrictions of COVID-19 by increasing sanitation measures, enforcing social distancing, and requiring masks for all employees.

Luckily for Elgison and his crew, golfing remains one of the safest sports and forms of recreation as it is done completely outside. Early on during the shutdown they shifted to requiring pre-booked tee times via phone or website which allows golfers to show up and go directly from their cars to the green without entering any buildings or interacting with anyone. That arrangement, coupled with the restaurant’s expansive covered back dining area, makes a visit to the Bobby Jones Golf Course and Boone’s Restaurant a safe and enjoyable way to get out of the house and feel a little bit normal despite these extreme circumstances.