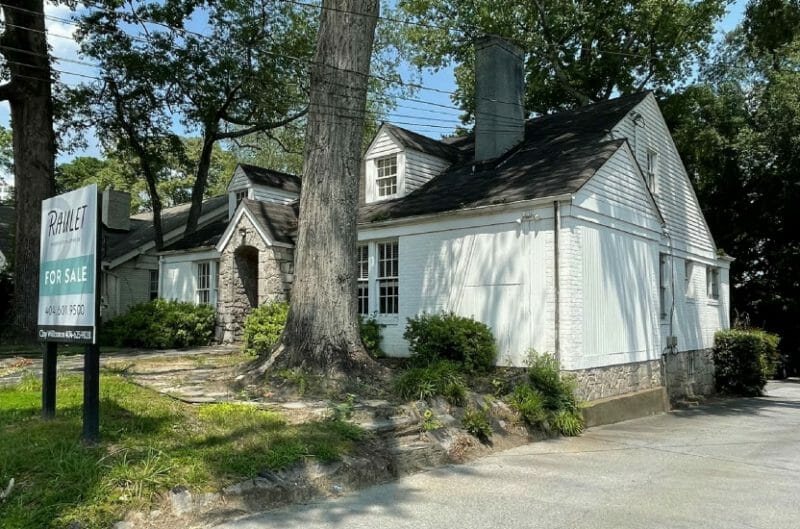 A popular Westside wine shop is planning to open a second location in Buckhead Village in a brand new building as part of the burgeoning redevelopment of East Shadowlawn Avenue.

Perrine’s Wine Shop, which opened in 2010 in the Westside Provisions District on Howell Mill Road, aims to demolish a commercial-use house at 3121 East Shadowlawn and replace it with a similar home-like structure. The significant amount of work means an opening would come around fall 2023. Perrine Prieur Gallardo, the shop’s founder and owner, says Buckhead is where she hoped to find a home for the original store before the Westside spot became available.

“It’s an exciting time as I celebrate 11 years since we launched our wine business at the Westside location,” said Prieur Gallardo in an email. “I’ve always had a dream to open another location in Buckhead. … I’m truly looking forward to share my passion for wine and creating a beautiful shop for everyone in Buckhead.”

East Shadowlawn is a short street running north-south between Peachtree and East Paces Ferry roads. It has a cozy, residential feel due to roughly two dozen detached houses that have been converted to such business uses as salons and spas. Major redevelopment is coming closer to the corridor, including the new Thompson Buckhead Hotel on East Paces Ferry at the southern end of East Shadowlawn. Now some of the houses are for sale and some redevelopment plans have begun.

The trend kicked off early this year as a longtime local business, the Jackson Fine Art photography gallery at 3115 East Shadowlawn, launched a plan to move across the street to 3122 East Shadowlawn. The plan, now under construction, involved demolishing an existing house there and building a new gallery in its place.

Special Public Interest District 9 (SPI-9), a specialized, design-oriented overlay in the local zoning code, has long anticipated redevelopment of East Shadowlawn into denser, bigger buildings and set standards for such features as wide sidewalks and lots of storefront windows. But Jackson Fine Art chose to design the new gallery in a similar house-like style, maintaining the small-scale, residential feel of the street.

Perrine’s is following suit with its plan for 3121 East Shadowlawn, which is right next door to Jackson Fine Art’s original location. The wine shop’s plans, revealed at a Sept. 1 meeting of SPI-9’s Development Review Committee, would demolish the 90-year-old house — formerly the site of Buckhead Health & Wellness — and replace it with another designed with a “contemporary, French country mood,” as architect Michael Gamble put it. An outdoor seating area and garden would be constructed in the front and five parking spaces would remain in the rear.

The house-for-a-house redevelopment trend has taken the SPI-9 DRC by surprise and elicited some long-term concerns about the sidewalks and other streetscape features being remade piecemeal rather than consistent. But the members generally approved of a narrower sidewalk and less glass in the wine shop’s design.

More concerning to the DRC was a plan to cut down two oak trees, each about 40 inches around. The architects said the expectation is the trees could not survive the demolition and construction, but also said the tree removal was a design feature and there is an alternate site plan that shows them saved. They agreed to have an arborist review the plan, which is still in a preliminary stage. The plan also includes planting two smaller street trees.

If the plan works out, the new shop would be similar to the Westside Provisions location, which features informative tastings and an ever-changing stock of roughly 700 wines, largely from family-owned wineries, presented in an accessible style backed with Prieur Gallardo’s considerable expertise. A native of Burgundy, France’s legendery wine-making territory, she went to culinary school and trained as a sommelier, working in that role at London’s prestigious French restaurant Le Gavroche. She moved to Atlanta in 2006 and, prior to opening the shop, was a sommelier at the now-shuttered French restaurant JOËL on Northside Parkway.

“East Shadowlawn is a beautiful street in with enormous potential and evolving quickly,” said Prieur Gallardo. “I hope that more small businesses see its potential as well, and that, together, we can make it a wonderful destination when you are looking for a curated, boutique experience.”And that may not be the only expansion of Perrine’s on the way. “We are currently finalizing some last details before we can officially announce a new partnership that I am very excited about. It’s another dream come true,” she said.