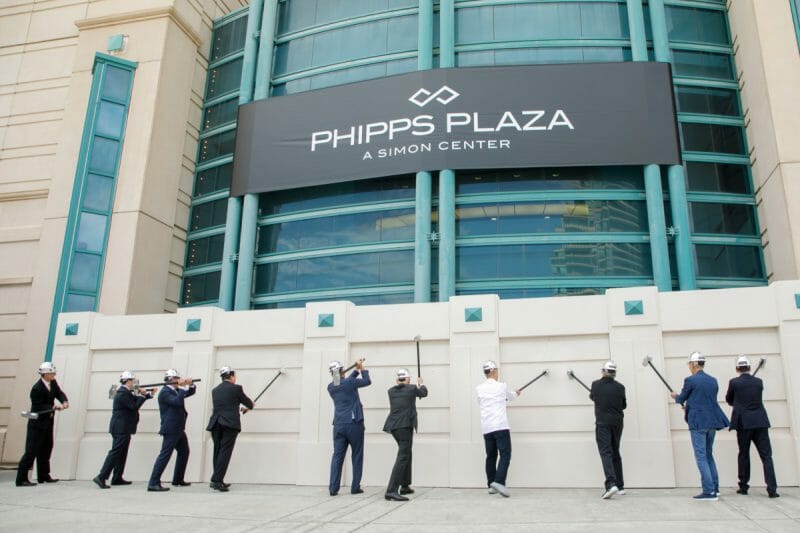 In November of 2017, Buckhead’s upscale Phipps Plaza shopping mall unveiled ambitious plans that will transform the traditional mall into a mixed-use destination with world-class anchor businesses. Last week the Beck design and build group behind the renovations brought down the founders of the Nobu hospitality brand, Chef Nobu Matsuhisa, Robert De Niro and Meir Teper, for the official groundbreaking ceremony.

Together with Simon Mall executives and local government officials, the crew toasted with sake, listened to live music from traditional Japanese drummers, and broke through a styrofoam wall with sledgehammers as a symbolic gesture while sparklers went off overhead.

Plans for the site include 440,000 square feet of mixed-use retail, hotel, and restaurant space, which includes a 150 room Nobu hotel, 12 story office building, and 10,000 square feet dedicated to the Nobu restaurant. A green space was also recently announced, bringing much needed open air space to an increasingly crowded area.

Long-time luxury retailers Saks Fifth Avenue and Nordstrom will continue to drive the shopping experience, but the mall will become a hotspot for foodies, tourists, and fitness enthusiasts with the addition of several extremely popular outposts: Nobu Restaurant, Lifetime Fitness, and Nobu Hotel. All of this development will happen on the existing footprint with openings in the next few years, with the Nobu Restaurant set to open on June 1st, 2020. The only retail casualty is the large Belk department store which closed its doors in summer of 2018.

Here is a look at these new options headed our way:

This famous Sushi restaurant and celebrity hangout is coming to Buckhead! The restaurant was started in LA by “Nobu” Matsuhisa in 1993 with customer-turned-business-partner Robert De Niro. Since then, the pair has opened Nobu restaurants from Dubai to Hong Kong to critical acclaim. With Nobu’s strong international brand, they will be a major draw to the area and an instant hit. They will need to bring their “A” game to compete with the world-class sushi we already enjoy at Buckhead’s Umi Restaurant.

Nobu Hotels was founded in 2013 by Nobu Matsuhisa, Robert De Niro, and Meir Teper. This boutique lifestyle hotel has locations in Malibu, Miami, London, Palo Alto, Manila, Ibiza and a full slate of new openings in the pipeline. Their Buckhead location will have 150 rooms, a roof-top pool, conference center, and spa. For more information on Nobu Hotels, visit www.nobuhotels.com

Life Time is well known for their oversized fitness centers that seem to have cross-pollinated with a social club and resort. They will be bringing 90,000 square feet of space to Buckhead across three floors with a roof-top pool and “beach club”. Other amenities will include personal training, weight loss programming, Pilates, studio cycle, and yoga classes, tennis, racquetball, squash, and a basketball league. A full-service spa, cafe, plus a medical clinic and chiropractic clinic will also be onsite. For more information visit the Life Time Fitness website.

As traditional shopping malls become more obsolete, this development will keep Phipps Plaza well ahead of the curve as they evolve with the times. We are excited about these new options for dining, fitness and entertainment in Buckhead!