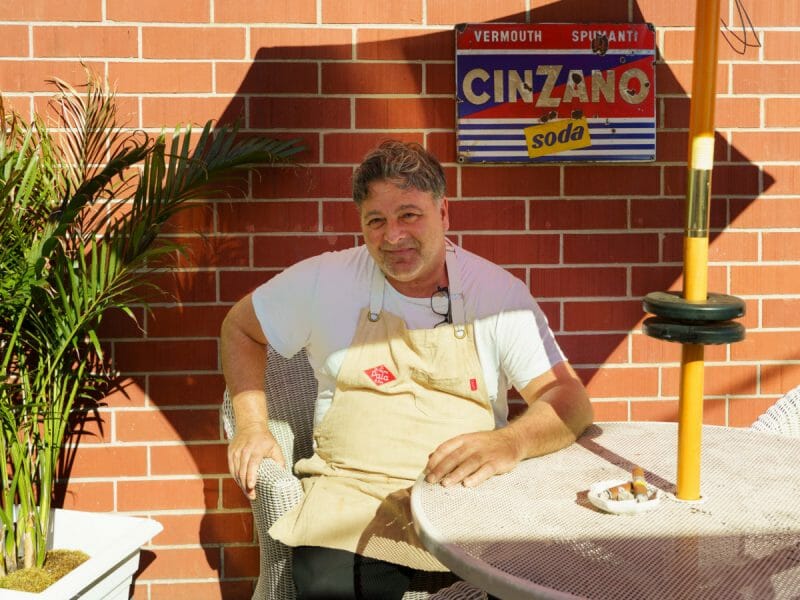 Pala Bakery doesn’t feel like a satellite location for Antico, Gio’s Sicilian, or any of Giovanni Di Palma’s other restaurants. It has a unique personality that blends seamlessly with the Paces/ West Buckhead community. Di Palma & Son have created a bakery that feels like it has always been there, with unbelievable food and deep neighborhood roots.

This latest restaurant by Gio Di Palma is in the former Yogurtland location next to Wender & Roberts Drugs at West Paces Ferry Road and Northside Parkway. Gio made a name for himself in Atlanta over the past 13 years with authentic flavors and techniques have made him a household name when it comes to Italian food. Di Palma owns restaurants in West Midtown, Alpharetta, and the Battery at Truist Park, but Pala is his first restaurant in Buckhead. It’s also the first project Gio has undertaken with his son, Johnny Di Palma.

Gio has had his eye on Buckhead for a while. “We lived over here on West Wesley, and that’s where I learned about this area. I thought, ‘Man, if anything ever comes open in that place We’ll take it the next day.’ And we did.” He jumped at the first opportunity. “I don’t even think I even read the lease. I didn’t know what I was gonna do. I said, ‘We’ll, just take it. We’ll figure it out.'”

The former yogurt shop location wouldn’t accommodate another Antico or Gio’s Sicilian. The smaller space inspired Gio to build what he casually refers to as a “carry out place”. What he and Johnny have actually created is not a typical “carry-out place”, but a bakery and gelateria like the ones you would find in Rome, Italy. The bakery instantly feels like part of the neighborhood. You’ll find kids picking out their favorite gelato and folks ordering pizza and baked goods. Everyone seems to know each other, and most patrons understand that the food they’re getting is something special.

Giovanni is known for his Neapolitan pizza, and he says he still considers that the best in the world. But when he starts talking about the concept and the food at Pala, his passion for Roman-style pizza becomes clear. “In Rome it’s about the crust. Making Roman pizza is about being a baker.” Gio says as he motions to the sign on the wall that says “Sono solo un fornaio”; Italian for “I’m just a baker”. “Because no matter how successful I get, I’m just a baker.”

Those of us who have eaten Giovanni’s food know that he is definitely more than just a baker, but his passion for the art and craft of baking is clear. Gio described the 3-day process to create the dough for his Pinsa Romana and Pala Romana. Each step in the process is very specific, and he’s been working on it for years. Gio told me the Roman style crust is perfect for carry-out, “The end result is a crispy, light, airy, grab-and-go crust. Appearance-wise, it seems a little bit thick, but when you pick it up it’s all air. It travels really well and it delivers really well.”

At the counter, you’ll find small Pinsa Romana, and the larger Pala Romana. A Pala is the wooden “shovel” used to place and remove the pizzas from the oven. The Pala Romana is available whole, or by the cut. Remember, it’s not a slice, it’s a cut. You’ll find mouthwatering flavors like Calabrese, meatball & besciamella, and mushroom & artichoke, among others.

Giovanni conceived the flavor combinations and hand-picked the ingredients. As he described the menu, practically every ingredient he mentioned was imported from Italy, and each item specifically chosen for flavor and quality. His Castelli ovens from Rome are the same one’s they use at the famous Bonci Pizzarium.

There’s more to love than pizza at Pala Bakery. The doughnuts (“Joey bag-o doughnuts”) are authentic ciambella imported from Rome and finished in-house. You’ll also find home-made paninis, cornetti from Italy, and Fior di Zuca (fried zuchini) and Bacala direct from Rome. The Bacala and Fior di zuca are served in a paper cone with cocktail sauce, perfect to grab and eat on the go.

The gelato case at Pala is a dazzling array of colors and flavors that hypnotizes every kid who walks through the door, but Gio recommends something less obvious for adults with a sweet tooth. He’s looking forward to educating the neighborhood about soft serve gelato.

The vanilla soft serve gelato is delicious, but the toppings and flavor combinations speak to Gio’s creative talent. Even here, the ingredients are hand-picked and special. Olive oil and sea salt, with Coratina extra virgin olive oil that Gio has to “Pull some strings” to get from Italy. Pistachio cream and freshly chopped pistachios, both from Sicily.

There is one soft serve gelato combination that Gio refers to as, “A problem”, because it’s so good it’s addictive. It’s rich vanilla soft serve gelato with crushed Georgia pecan pralines, drizzled with Pappy Van Winkle syrup. Bourbon drinkers will recognize the Pappy name from the famous small-batch spirits. Maple syrup aged in the used bourbon barrels is a unique flavor that is perfect with gelato and pecan pralines.

Welcome to the Neighborhood

One of Pala’s first customers was an older gentleman who lives in Buckhead. A surgeon who is originally from Sicily. The doctor walked up to Gio and said, “I’ve been waiting 45 years for you!” He was so happy to find a neighborhood bakery like the ones he was used to back home in Italy. The doctor had a gelato, a coffee, “he bought everything!” This is exactly the authentic experience Gio and Johnny are going for.

Gio told me, “We’ve been in Buckhead for 13 years, and Johnny grew up in Buckhead.” Johnny played quarterback for Holy Spirit, and coaches soccer there today. Now Pala Bakery employs kids he grew up with, and other kids from the neighborhood. The Di Palmas are passionate about serving the community and providing opportunities for local high school and college-aged kids. “It’s amazing I’d never had a restaurant here, and now I’m like, ‘what was I thinking?’” Thanks Gio, we’re glad you changed your mind!