History is Messy at the Atlanta History Center 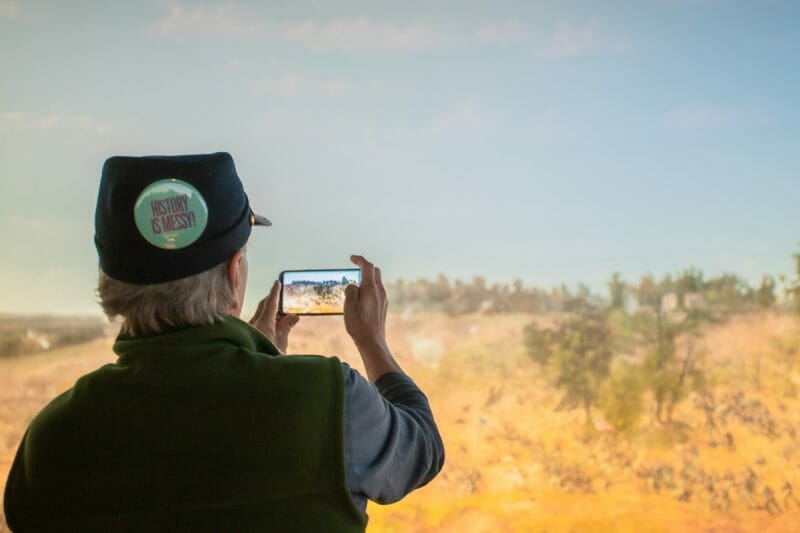 A sprawling 33-acre property at  the corner of West Paces Ferry Road and Slaton Drive near Buckhead Village houses the Atlanta History Center. While it has certainly become well-known for its archives, fascinating exhibitions, and a wonderful collection of historic homesteads sprinkled throughout the lush gardens, the Center has become so much more in recent years. To understand the impact the History Center is having today, I wanted to know the story of its origin, so  I arranged to meet with the President and CEO, Sheffield Hale.

The History of the Atlanta History Center

Nearly a century ago in 1926 a group of civic-minded Atlantans led by attorney Walter McElreath chartered the Atlanta Historical Society. The goals were to study, investigate, and preserve the archives of Atlanta and the state of Georgia, and to bring about greater interest in its history. The organization operated out of a variety of locations during its early years, including office space at the Biltmore Hotel, a dreamed-of but never constructed site at the corner of Peachtree and 16th Streets, the Erlanger Theatre building, and the Willis B. Jones house at the corner of Peachtree and Huntington Roads (which was for a time called McElreath Hall).

In 1966 the Society purchased the estate of Mrs. Edward H. Inman which included 23 acres of wooded terrain and the 1928 Swan House designed by Philip Trammell Shutze. In the years that followed they continued buying houses along West Paces Ferry Road and expanded their footprint to what is now 33 acres.

The Tullie Smith Farm House was later moved to the site as was a Victorian playhouse, and in 1975 the Walter McElreath Hall was constructed which includes the Woodruff Auditorium, Members Room, and the Kenan Research Center. A campaign raised $16.1 million to construct the 83,000 square foot Atlanta History Museum at its current site in 1990. Expansions in 1993 and from 1998 to 2001 added to the facility even more.

It was only a few years ago in 2017 that the Battle of Atlanta cyclorama painting was moved from Grant Park to the Lloyd and Mary Ann Whitaker building which was constructed thanks to a $10 million endowment pledged to the History Center in 2014 and brought the total amount raised for this effort to a whopping $35.2 million.

Relocating the cyclorama was a massive undertaking and restoration took 15 months. We covered the grand opening of the exhibit back in February of 2019, which now includes interactive monitors, dynamic digital displays, and a selection of objects and images that illustrate the artifact’s long history.

A number of exhibitions rotate through the museum, touching upon a variety of interests from Native Americans to the Civil War to the legacy of Barbecue. Around 60 lecturers are brought in to speak at the facility each year, and the Center hosts events throughout the grounds for holidays and special occasions which draw families, young professionals, and history buffs alike.

Hale is a compelling character, somewhat soft spoken with a witty sense of humor who doesn’t take himself too seriously. He’s not afraid to engage in critical dialogue about heavy historical topics while also humble enough to admit that he doesn’t have all the answers. Prior to taking the helm at the Atlanta History Center, Hale was a career lawyer with a lifelong passion for history.

History is in his DNA.

Hale began his involvement with the Atlanta Historical Society in downtown Atlanta when he was a young man just out of college. He has since served on a number of boards including a stint on the Atlanta History Center when he worked under his father who was chair at the time. “That was some hell,” joked Hale with a laugh. “I was like ‘I’m getting off this board’ because you don’t want to be on the board where your dad is the chair.”

After 16 years at a prominent local law firm, Hale became chief counsel at the American Cancer Society for 10 years, served as chair of the Atlanta History Center from 2005 to 2006, and has been working in his current role since 2012.

Hale has proven to be a powerful figure for the Center since his first crowning moment when, as chair, he orchestrated the major loan of the King Collection for initial public display. The exhibition featured Dr. Martin Luther King, Jr’s papers which were on display in their entirety from January to May of 2007.

“I was just the chair, I didn’t even tell the CEO. Poor guy,” he said, and laughed. “I could be a really good chair or a really bad chair, and I was both in that case. I know the difference. I was an aggressive chair so I went and got it and then told the CEO.” The loan served to put the Center on a national stage and garnered attention from local and more far-reaching publications, including a feature in Jet Magazine which to this day is proudly displayed in Hale’s office.

Hale didn’t necessarily want the role of CEO and President when the position first became available, but he was encouraged by other board members to throw his hat in the ring during the search for a new leader in 2012. Today he can hardly believe that he ever held doubts as he has grown into this role with a unique passion for history, preservation, education, and outreach.

Hale has an uncanny ability to see far into the future of an organization and utilizes his drive, passion, and connections to ensure funding for the pursuance of lofty goals. While he tends to think about history in the frame of the bigger picture, he also enjoys even minute details and is constantly seeking ways to use history to unite his community.

Recently, developing and implementing the Center’s Confederate Monument Interpretation Guide has been one of Hale’s biggest tasks. Many may have seen or heard about the exhibition panels which have been erected alongside Confederate statues and monuments throughout the city.

“They aren’t really Civil War monuments; I like to call them Jim Crow monuments because they were erected in that period and in large part they reflect that ideology,” explained Hale. The exhibition panels seek to contextualize the works, including who owns it, how it was dedicated, what group(s) funded its construction, and outlining the legacy, both good and bad, of the people who are depicted in the piece.

For many who have grown up hearing a particular side of a history, whether it be one of veneration or condemnation, they may bristle at the idea of redefining these works. But as Hale believes, a critical eye and willingness to consider the full story and all available truths can leave viewers with a more robust understanding of why and how the monuments were erected without erasing the history behind it.

“A statue of Lee on a horse is not about the Civil War, it’s about the people who erected it and how they are trying to remember the Civil War in 1925, what was going on then, why is it important, and why is that projection of power, which is really what that is – an equestrian statue is not about loss, it’s about power – so we try to explain that.”

According to Hale, history is made up of “dysfunctional people” who he finds fascinating, and he has an innate understanding that the past can and does impact the present and future of communities in many ways. “It’s our job to create a more vibrant democracy and create a better community, a better country,” said Hale, who hopes the Atlanta History Center can “create a better community where people want to work with each other to build a better city. That’s why we are here.”