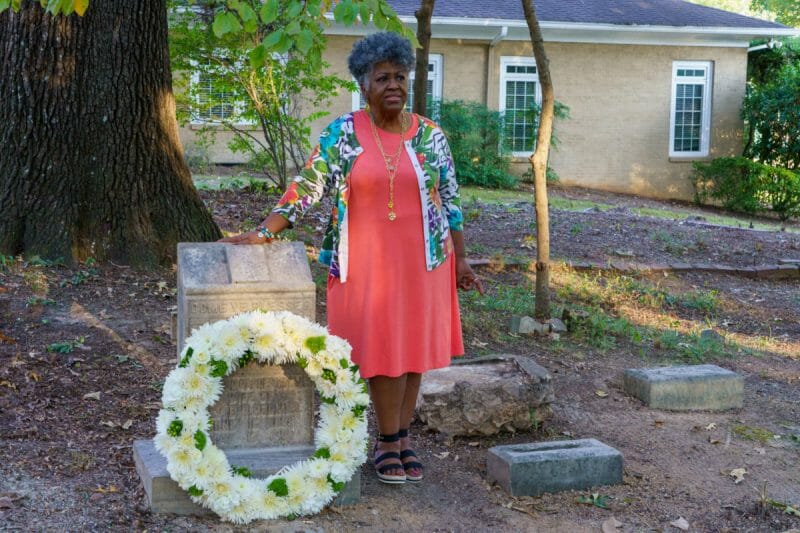 Buckhead’s Mt. Olive Cemetery was rededicated in an Oct. 9 ceremony honoring Black former residents who were driven out 70 years ago for redevelopment.

The event was part of the City’s “ELEVATE Atlanta” public art program, which ran Sept. 16-Oct. 9, and was supported by the Buckhead Heritage Society and the Buckhead-based Atlanta History Center.

The cemetery, within what is now Frankie Allen Park off Pharr Road in Garden Hills, is the last surviving remnant of an African Methodist Episcopal church founded around 1870 by former enslaved people. A Black community grew in the area, with many residents working as servants in the homes of white Buckhead families. In 1912, it attracted some of the thousands of Black people driven out of Forsyth County in an infamous campaign of racist terrorism. In 1921, a developer created a subdivision called Macedonia Park that became a community of about 400 people and several businesses, according to Buckhead Heritage. The neighborhood was alternatively known as Bagley Park for a prominent resident and unofficial “mayor” named William Bagley.

But in the 1940s and 1950s, Fulton County took all of Macedonia Park by eminent domain and other methods, displacing all of the Black residents to create a public park to serve new, white developments. The new green space was called Bagley Park, but in 1980 was renamed Frankie Allen after the head umpire of the Buckhead Baseball youth league, an Augusta resident who stayed in the area for the season.

Today, the Bagley name survives on the street leading into the park. The cemetery is the only remainder of the Black community, and was itself endangered by redevelopment in 2010. Buckhead Heritage was involved in successful advocacy to save the cemetery and in 2020 was designated by the City as its official caretaker.

“We are proud to be part of this historic project in Buckhead,” said Camille Russell Love, executive director of the Mayor’s Office of Cultural Affairs, in a press release about the rededication. “It’s important for many reasons. In 1912, Forsyth County mounted a campaign to drive out Black residents. Many of these people settled in Buckhead where they found work, created a thriving community, and attended Mt. Olive Church, then were driven out of their homes again by the early 1950s through eminent domain. It’s time to remember and honor these Atlantans.”

Love spoke at the ceremony, as did Pearl Cleage, the City’s poet laureate and a well-known playwright and novelist.

Also in attendance was Elon Butts Osby (pictured at the top of this story), William Bagley’s granddaughter, who is a longtime advocate for the cemetery. Her family was among those who came to Buckhead due to the racist Forsyth purge. Her parents, Pete Butts and Willie Mae Bagley, ran a rib shack in the community before they, too, were forced out by the County. Osby has recounted many of her family stories in an oral history available on the Buckhead Heritage website.

The history of Bagley Park and the cemetery are also the subject of an exhibit by artist Kimberly Binns that runs through Oct. 15 at the Buckhead Library, 269 Buckhead Ave. in Buckhead Village.

The following poem was written by Pearl Cleage to accompany the wreath laying ceremony. It is included here with the author’s permission.

This is Dedicated to the Ones We Love

This is dedicated to the ones we love.

Each night before we go to bed, my sisters,

Whisper a little prayer for them, my brothers.

And tell all the stars above, this is dedicated to the ones we love.

But I can’t sing. I can only honor this moment by staking my claim.

And I do. I claim them all as mine. Loved ones. Family. Ancestors. Mine. Ashe.

But who are they?

Who are these ones we come to honor? These ones who stood where we are standing,

The history books will tell you what they did to earn a living.

The history books will tell you they were maids, laundresses, chauffeurs, yardmen, gardeners, caddies, brick

But they were more than that. They were real people. Loved ones. Family. Ancestors.

I claim them all.

The ones whose names we know and the ones we only know by their plot numbers.

They are my children; my grandmamas and granddaddies; my laughing aunties and sharp dressed uncles;

They are the quiet ones who bloomed in the sacredness of solitude and spirit; who sat by the creek and wondered

how it feels to be free.

They are the loud and rowdy ones, my cousins once removed; they are star crossed lovers and heartbroken widows

probably a poet or two.

Because we were whole. Intact. Full of freedom hopes and freedom dreams, prayers of thanksgiving and songs of

We were consciously community, deeply rooted in and reflective of who we were and who we would become. Ashe

I claim Parthenia Jetter who remembers heading home fast when the Klan came riding through.

I claim the ones who named their churches Mt. Olive and Macedonia and White Lily.

dreams and the ones who counted on Buddy Bonner if they needed a good blacksmith.

Germans place since she always had the freshest greens.

chicken which was always worth the wait.

I claim young Essie Davis who surely died of a broken heart, after her beloved Matthew’s passing and whose bones

lie with him here beneath our feet while we know their spirits dance in heaven.

I claim Lula Williams laid to rest here after surviving slavery and the Civil War and Reconstruction all in one lifetime.

I claim them all as mine.

I claim their lives as my legacy.

I claim their strength as my birthright.

I claim this place that held and housed them after slavery’s long, unspeakable nightmare.

I claim this space as sacred space, a healing circle, a promise of truth and reconciliation

Because we are that promise fulfilled.

I claim them all. Each and every one. Grateful we have finally found a way to call them home.

A way to come together and commemorate and consecrate and dedicate this space, this place, to the ones we love.

A way to claim their lives as our shared legacy.

A way to claim their strength as our shared birthright.

So this is dedicated to the ones we love.

And each night before we go to bed, my sisters,

Whisper a little prayer for them, my brothers,

And tell all the stars above,