Fetch Park for dogs (and humans) makes its Buckhead debut 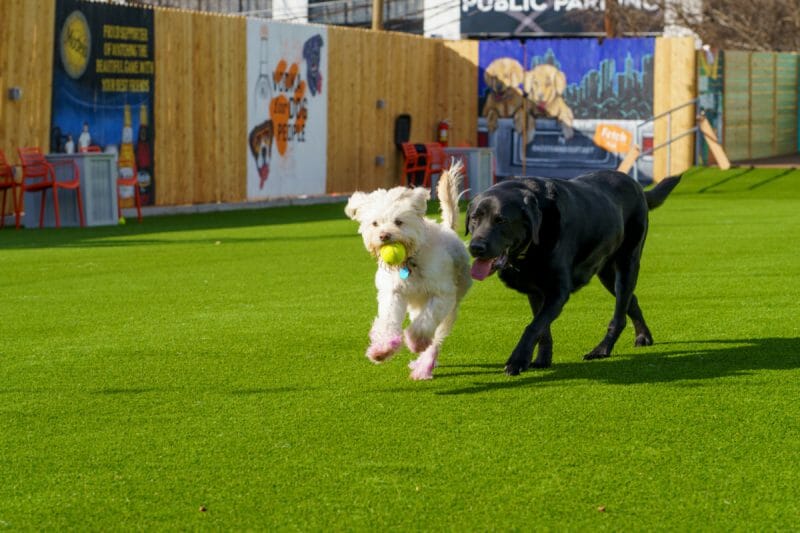 Fetch Park — a combo dog park, bar and gathering space — made its long-awaited debut in Buckhead Village this week.

Fetch replaces a 1.3-acre parking lot at 309 Buckhead Ave. at the intersection with North Fulton Drive. Its artificial turf is open to dogs that are vetted for behavior and vaccinations for a membership fee, and to any dog-less human for free. Fun for human visitors includes a bar in an Airstream trailer, food, and music, trivia and other live events.

“I think the biggest thing we would like people to know is, you don’t need a dog to come,” said Fetch founder and CEO Stephen Ochs, speaking on the phone as he tossed a tennis ball to a canine friend in the park. “We are not a dog park. We are a dog-friendly social hub.”

Ochs opened the first Fetch in 2018 in the Old Fourth Ward and had a hit on his hands. He’s now expanding across the metro area and into other states, and even launching a franchise model. An Alpharetta location is under construction, and work will begin soon on sites at the Works in the Upper Westside and in Nashville, Tennesee. A location in Colorado is in a permitting phase as well, Ochs said.

Fetch’s Buckhead landlord, Jamestown, has proposed a dog park on the roof of a movie theater as part of its forthcoming renovation of a Sandy Springs shopping center. Ochs said he “can neither confirm or deny” Fetch’s involvement there.

As for the Buckhead location, enjoy Fetch while it’s here, because it is likely not to last forever, at least on this exact spot. Ochs said last year that Jamestown, which also owns the Buckhead Village District complex across the street, has long-term plans to construct a new building on the site. That could be in a five- to 10-year timeframe.

While Fetch is not just for dogs, they are a center of its life and a big reason for the Buckhead location. Buckhead has a huge dog population — estimated at 82,000 in a survey last year by the nonprofit Livable Buckhead — and a boom in residential construction in the dense business areas with few park spaces. Ochs said that as the Buckhead park’s opening was delayed by around six months, he was getting around 100 private messages a day on social media asking when it would open.

“Two years ago, if you would have told me I’d be opening a park surrounded by highrises in this dense of an area, I probably would have laughed at you,” he said of his surprise at the demand.

The first big event scheduled is dog-oriented, too: a “Puppy Bowl” on Super Bowl Sunday, Feb. 13. It’s a fundraiser for Canine Assistants, a Milton-based nonprofit that trains service dogs. The park turf will be painted like a football field, on which the service dogs will attempt to play a version of the game. Ochs says the public playtime in part helps the dogs acclimate to the busy sights and sounds they will encounter as service animals.

For regular visitors who want to bring a dog, be aware the pet will be vetted as safe for other dogs and people, and it will be recorded and tracked on an app. You’ll have to provide proof of vaccines and sign a liability waiver. Admission per dog is $10 for a day pass and $30 a month for a year-long commitment or $40 month-to-month. A $275 annual membership is also available.

People without dogs can enter for free unless there is a special ticketed entertainment event. Some of the live entertainment gearing up at Buckhead Fetch is an “Unleashed and Unplugged” concert series and “Bark and Banter” comedy.