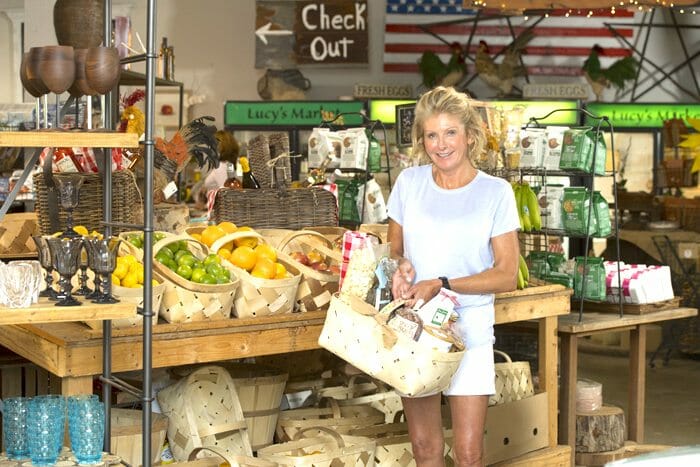 Southeast VP, Herbert Ames, said that EDENS, “aims to preserve the quality retail the Village is known for, curating the best-of-the-best, and that starts here at Andrews Square. We saw an opportunity and a responsibility in giving these local retailers a place to call home and preserving the character of the village,” Ames said. “A large part of the character is these local tenants. They have these personalities, they know their customers by name and every city needs that.”

This mission of preserving local flavor is moving quickly and we are glad to see it happening! Lucy’s Market is a longtime favorite just up the street on West Paces Ferry. Their current location is most certainly destined for high-rise development but they are finding refuge, and a new home, at Andrews Square.

“We’re thrilled,” Lucy’s Market owner Kim Wilson said about the move. “EDENS has been great to us. This move is allowing us to design a space in line with our goal of being a retreat among the bustling Buckhead community.” The new location will be ready September 12 and have the same look and feel but with better parking and a little friendlier for the customer to get in-and-out of.” With the increase of high rises and other “revamps” in the district, locals were afraid of local shops losing their unique style if they were to stay in business. Wilson, however, thinks EDENS is preserving the local flavor that the people of Buckhead love, particularly at Lucy’s.

“[Lucy’s] is very open and warm with a back-to-basics feel in the middle of Buckhead with upscale products,” Wilson said. “A lot of customers are afraid we’re going to lose that touch, but we’re not. We’re just thrilled to get over there before the holidays.”

Ames (EDENS VP) points out that renovation happening in Andrews Square is just one of many steps to improving the neighborhood’s walkability and connecting surrounding areas.

“With some other improvements that are being done in the neighborhood from the Buckhead Community Improvement District, they’re going to be putting in streetscapes, sidewalks and streetlamps,” Ames said. “The neighborhood is going to become the walkable urban place that Buckhead has really wanted but with a focus in retail at the core. We’re looking at this as a broader West Village initiative more than just Andrews Square or the Buckhead Market Place – this is about keeping the character of the neighborhood in general and connecting it, which is what the CID is going to be doing.”

Not long after Lucy’s moves in, Poppy’s Boutique of Atlanta will begin construction just a few doors down in the shopping center. While their new space will start construction in October, Poppy’s will continue their business in the same location they’ve been in for the past 35 years until the new lot opens in January of 2017.

“For us, it was important to stay within the shopping center because we’re such a well-known establishment in the city,” said Lindsay Wegener, the owner of Poppy’s. “[The new space] is going to be a tiny bit bigger and a much more functional space.”

Even though the surrounding area of Buckhead may be turning into high-rises and condos, Wegener was grateful for EDENS efforts to keep the city’s quirks within the square.

“I definitely think [EDENS] want to preserve [local charm],” Wegener said. “We’ve seen the renderings and what the finished product going to look like and it’s going to be very nice.”

Henri’s Bakery, across the street from Andrews Square on Irby Avenue (also going through their own expansion process) is witnessing the renovation. Madeline Leonard, the owner of Henri’s, seemed optimistic about EDENS’ efforts, as well.

“I think [EDENS] is trying to preserve the local flair,” Leonard said.

Another native favorite, Boxwoods Gardens & Gifts, are happily staying put right next to the new-and-improved Andrews Square. Co-owner Dan Belman expressed his enthusiasm to the changes happening in West Village. “[EDENS] idea of bringing in traditional Buckhead establishments that are being forced out everywhere else – I think it’s a great idea,” Belman said. “I was getting concerned that everybody is getting squeezed out and all there’s going to be is big box stores, office buildings, condos and apartments. I think it’s going to be a good, consolidated space for all these small businesses.”

When asked about Boxwoods’ new competition, Belman sounded eager rather than worried to have new neighbors and businesses.

“[Boxwoods] built a reputation on having good product at good pricing, so I’m all for the competitors being in the same marketplace,” Belman said. “It keeps everybody sharp.”

We are excited to see EDENS commitment to preserving some of Buckhead’s best retail and maintaining close community ties. Tell us in the comments which establishment you are most excited for in the new Andrews Square!