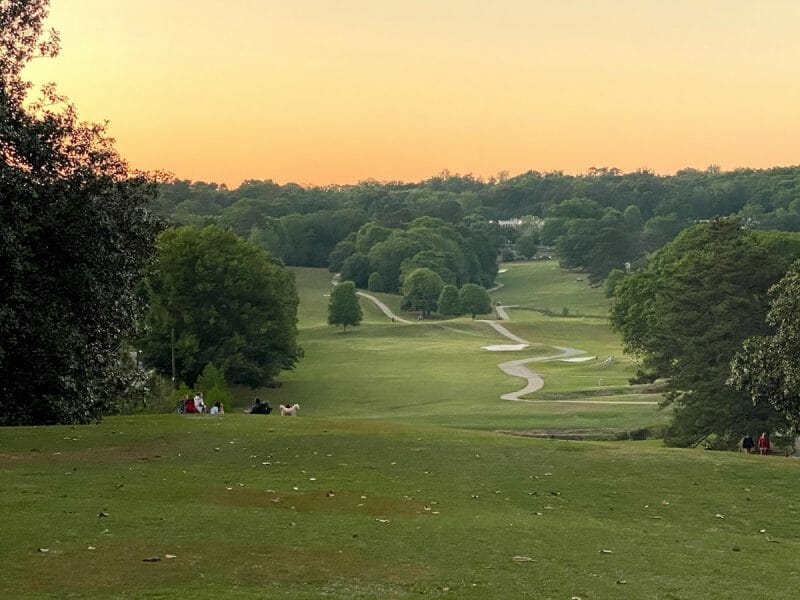 A two-month “test” period of sharing the golf course—one day a week—with walkers, bicyclists, picnickers, and everyone else is underway

Since the coronavirus pandemic clamped down upon Buckhead in March, District 8 Atlanta City Councilmember J.P. Matzigkeit has participated in panel discussions, countless conversations in public, and no shortage of personal introspection about the future of Chastain Park. Our story and photos on the issue in early May generated a massive response, showing passion on all sides of the debate. The public input has partially paid off, with the Atlanta Parks Department agreeing to keep the golf course closed to allow public use of the greenspace on Tuesdays for a 60-day period.

Matzigkeit’s district covers the park and golf course. He lives a stone’s throw from it. And years ago he cofounded the Chastain Park Conservancy and helped craft the park’s masterplan. Yet he’s heard the pleas that call for ditching golf at the park—Atlanta’s largest at 268 acres, with the vast majority reserved for golfing—altogether, or at least reducing the course to nine holes. And like many, as ironic as it might sound, he speaks of the early days of the pandemic as a halcyon time, in terms of the park’s communal spirit, when the grassroots idea to “Free Chastain Park” of golf gained traction.

Over 1000 people have voted in the Buckhead.com poll since it was published in early May. As of press time, 56% of voters wanted to see change, and their wish has been partially granted…for now.

“It was incredible, it really was,” said Matzigkeit. “During COVID, with the complete shutdown, you had a need for people to be outside, to exercise and enjoy the fresh air in a physically distant way. The golf course gave them that escape, and they discovered how fabulous the course really is.”

After three months, however, Chastain Park’s public-access free-for-all ended last week—Tuesdays notwithstanding. And now, impassioned public opinion about the park’s accessibility is once again running the spectrum.

Chastain’s historic North Fulton Golf Course reopened to golfers June 15 (or at least to players who hold fore and annual passes) with safety measures that include keeping the clubhouse closed and allowing just one golfer per cart. Public access, meanwhile, has been relegated to park hours (6 a.m. to dark) on Tuesdays only, for a 60-day period that Matzigkeit calls “a test.”

After the city decided in March to shutter golfing operations and open the fairways like any other public park, Atlanta’s Department of Parks and Recreation conducted an analysis that included golf course usage data at Chastain and the schedules of other city-operated courses, before deciding on Tuesdays for public access. Between now and mid-August, meetings for public input are expected, and any decision to continue golf-course closures or not will come from the city’s parks leaders, Matzigkeit said. The Chastain Park Conservancy’s executive director, Rosa McHugh, said the new protocol “looks like it’s working very well,” in an email. But, she added, “it’s only been a week, so it’s hard to tell long-term.”

Matzigkeit isn’t aware of another course in metro Atlanta that allows public patronage, but one famous example, he noted, is St. Andrews in Scotland, which has been converted to a community greenspace most Sundays for hundreds of years. “If you can do it in the birthplace of golf,” Matzigkeit said, “we can do it here in Atlanta, Georgia.”

A visit to the park Tuesday evening showed a different, quieter scene than weeknights in the more socially restricted months of March, April, and May.

Sweltering weather at 5:30 p.m., the onset of vacation season, and the resumption of some youth sports were likely all factors, but recreationists were sparse across the links. A few guys did wind-sprints up a steep hill, and an eclectic mix of walkers—from teens in workout gear to masked elderly folks—hustled along cart paths. Probably twice as many people were seen on the PATH Foundation trail around the park, walking dogs and jogging along the periphery.

One issue, as Buckhead resident Rebecca Peckham pointed out, is that visitors not privy to the community’s Nextdoor site have seen golfers back on the course and assume it’s closed. She’s all for keeping it that way, too, throughout the week.

“My big concern is a slippery slope,” said Peckham. “You go to Tuesday (for public access), and that becomes Tuesday and Wednesday, and people say, ‘Isn’t this great, let’s do more days, and the golfers don’t really need it, except for the weekends.’ Then it becomes, ‘Why don’t we do Music Midtown in Buckhead!’ I mean, that’s probably a little extreme, but it’s the City of Atlanta, all their property, so you don’t know.”

Conversely, another walker and longtime nearby resident, Donna Hinkes, wants to see the park accessible as many days as possible.

“When I first moved to Atlanta, people said, ‘Oh, you’re so lucky, you’re going to live by Chastain Park.’ I said, ‘Chastain Park? It’s a golf course with a sidewalk around it,’” said Hinkes. “Then, during the shutdown, there were people having picnics, children learning to ride their bikes, people playing croquet in the grassy areas… We want the golfers to be able to golf, but it’d be nice to have a Sunday, or even just a Saturday and Sunday evening, so you can come with your family.”

The only downside to so much access, Hinkes said, was the occasional rule-breaker who didn’t leash large dogs or left garbage behind. That latter issue swayed Chastain Park resident Britton McLeod from being a staunch supporter of fully opening the park to a borderline naysayer.

“Closing the park and opening it only on Tuesdays is actually a good thing,” said McLeod. “It got kind of out of hand. Teenagers, mainly, and preteens were not respecting the rules. There was a lot of pollution in the park and also in connecting neighbors’ yards where kids walk. It really became an issue for the neighbors.”

Allison Vuicich, who lives across the street, applauded any public access she can get, but worried aloud: “I don’t know how it’s going to work with (the city) losing the money, because from what I understand, this helps fund the other golf courses of Atlanta.”

That’s true, and Chastain’s course is one of—if not the most popular courses in Georgia, according to Matzigkeit, with an estimated pre-coronavirus patronage of 50,000 rounds annually. Data for the 2019 calendar year, as provided to Buckhead.com by the city, show Chastain’s golf course raked in more than $1.6 million from 56,200 rounds played, with the monthly highpoint being 7,079 rounds (July) and the low 1,647 (January).

Designed by H. Chandler Egan, a colleague of Bobby Jones who also helped design Pebble Beach in California, the course opened in 1937 and remains the only city-operated option for golfers north of Candler Park. Rates top out at $25, including carts, with weekday early-bird specials of $10 rounds. “There’s also some history here in terms of Black Atlantans playing this course in a time of segregation,” Matzigkeit, who’s not a golfer, pointed out. “It’s a wonderful course, with a lot of history.”

Tuesday’s tour ended back near the clubhouse, where James Hancock, who lives near Buckhead Village, was lounging sweaty in the shade, on the putting greens. He reflected on his very first visit to the park that evening, a failed attempt to walk the entire course with his pals.

“It’s a great view of the city, and the trees, and the forest,” said Hancock. “I see myself coming back, absolutely. Maybe I’ll walk the whole thing next time.”