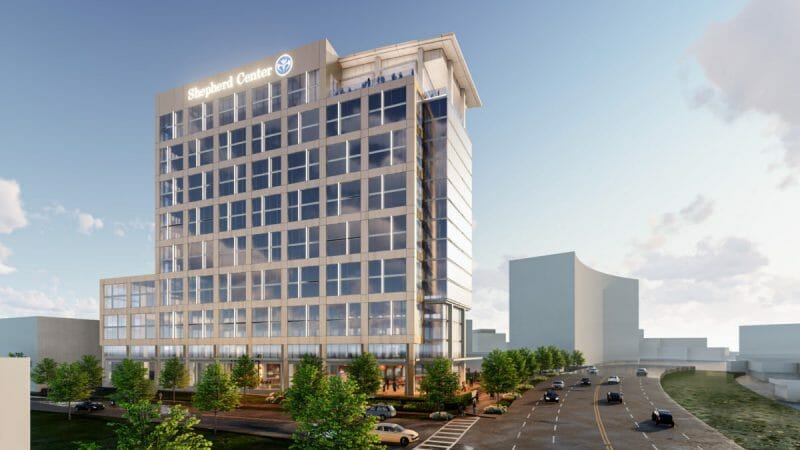 The Shepherd Center rehabilitation hospital is moving head on a long-planned tower intended to nearly double its housing for patients and their families. And a second tower may one day join it.

Announced over three years ago, the tower is planned for the northwest corner of Peachtree Road and 28th Street in Ardmore. The site is about three blocks south of the Shepherd Center’s main facility at 2020 Peachtree, and on the other side of Piedmont Atlanta Hospital.

The Shepherd Center announced Dec. 8 that it is filing plans for a roughly 160-unit residential tower, which is depicted in conceptual illustrations as roughly 15 stories tall. The street address is given as 1860 Peachtree, while the overall property owned by the hospital also includes 1874 Peachtree and a parking lot that connects to Collier Road to the north. The plan includes first-floor retail space of a kind to be determined.

“One thing we do know is that we would like the retail to be something our patients/families could use, such as a small restaurant where they could relax and eat or get a limited amount of groceries,” said hospital spokesperson Kerry Ludlam.

The hospital expects the project will require City zoning variances related “mainly for ease of entrance/exit from the building,” said Ludlam.

The main use of the tower would be the patient and family housing, which would be funded by donors for the entire stay. The hospital currently has 84 such units but says its need it bigger.

“The kinds of injuries and illnesses that bring patients to Shepherd Center are challenging not just for patients, but for entire families – physically, emotionally and financially,” said Sarah Morrison, the hospital’s president and CEO, in a press release. “Family members become crucial parts of the care team at Shepherd, participating in a wide variety of training and education before they often become primary caregivers when their loved ones return home. Expanded housing will ensure that our patients are surrounded by the love and support they need and that families – no matter where they call home – can be a part of the rehabilitative journey.”

More expansion could be on the way. The press release says the site offers “room to grow further by including significant green space with the flexibility to eventually build a second tower to provide more patient or family housing, clinical areas and office space.”

The site previously was home to two chain restaurants: Uncle Julio’s, which shuttered its Atlanta locations earlier this year, and Ted’s Montana Grill, which moved to the Upper Westside. Part of the site is now being used by a seasonal Christmas tree seller.

Founded in 1975, the Shepherd Center is often ranked as one of the nation’s top rehabilitation hospitals. It aids people with spinal cord injury, brain injury, multiple sclerosis, spine and chronic pain, and other neuromuscular conditions.