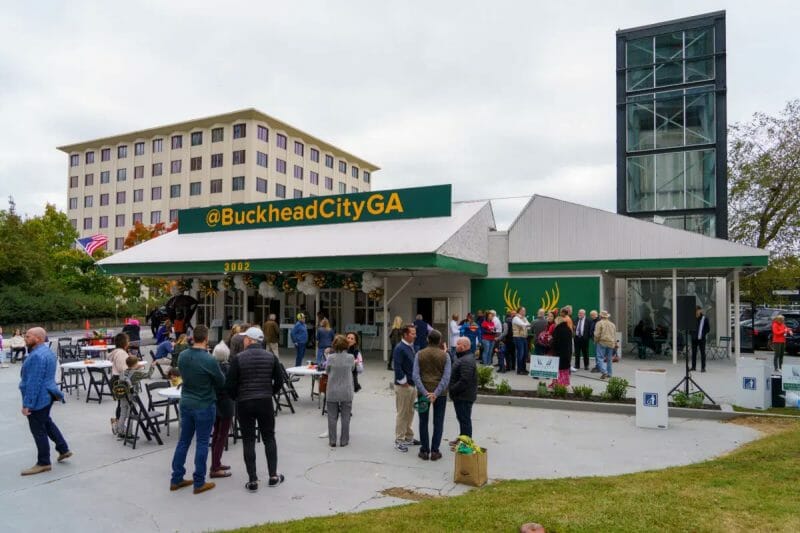 The Buckhead City Committee (BCC) has been forced by City inspectors to change the size of the sign atop its Peachtree Road headquarters after a complaint that it violated the zoning code.

The BCC headquarters debuted Oct. 31 in a long-vacant restaurant space at 3002 Peachtree. BCC Chairman and CEO Bill White said the organization previously got City approval for the green-and-gold sign, which reads, “@BuckheadCityGA” — the effort’s social media handle. He called the zoning enforcement following the Jan. 4 complaint “selective and harassing” and said replacing the sign will cost BCC up to $10,000.

“We have proof of prior approval for our sign and therefore we put our signs up,” said White. “That said, we are working now with COA [the City of Atlanta] to replace sign with the one they’d like. It’s just our donors money that is being wasted due to this harassment. … Typical corrupt process, nothing new.”

The headquarters is within Special Public Interest District 9 (SPI-9), a zoning overlay area with design standards focused on pedestrian friendliness and high-quality appearance. The complaint alleged that the sign violated regular and overlay zoning by being on the rooftop, extending above the top of the building, and exceeding 10% of the public-facing facades.

City records show a permit for the sign was approved Oct. 27. The situation may have involved confusion between the sign itself and a structure apparently designed to hold a sign, which remains in place and is still being used. The complaint, using Google Map images, claims no sign has been on the structure for many years, so it could not be considered a nonconforming existing use. White provided a photo of a sign he says was on the structure for many years. But either way, the supporting structure was there.

SPI-9 has a Development Review Committee (DRC) to advise the City on developer or tenant requests for special administrative permits (SAPs) to vary from standards in the district. The DRC is chaired by Denise Starling, who also serves separately as executive director of Livable Buckhead, a sustainability nonprofit that is among the many Buckhead cityhood opponents.

Starling said that the BCC headquarters plan did not come before the DRC for review and that signage alone typically is not reviewed by the committee. But, she said, she heard some complaints about the sign and checked on them.

“I did contact the planning department to question the legality of the sign when it was brought to my attention (by a few people) and understood it was not an issue,” Starling said in an email. However, Starling said, she then saw the complaint recently filed anonymously with the City and “it does make it clear that there is indeed an issue.” She asked a City planner about the status of the complaint at a Jan. 5 DRC meeting, but the planner did not know about the case.

White says the sign is being replaced with a “slightly smaller” version matching previous signage on the building. He claimed that other nearby businesses have similar signs with no complaints and that a City inspector apologized to the BCC for being singled out.

White has previously said that a new Buckhead City itself would be strict on enforcement of codes and laws as part of a public safety mindset, but he spoke vengefully about the headquarters sign situation.

White said that “we’re going to remember all these things, all these little ankle-biting things that inspectors and City workers could be spending their time working on versus harassing Buckhead City. And further, instead of sitting down and working with us to try to talk us off the ledge, they’re doing things like this. So when it comes time for divorce negotiations, we’re going to remember all this continued harassment and abuse. So will the judges.”